Nurse-Cheerleader Always on Her Game 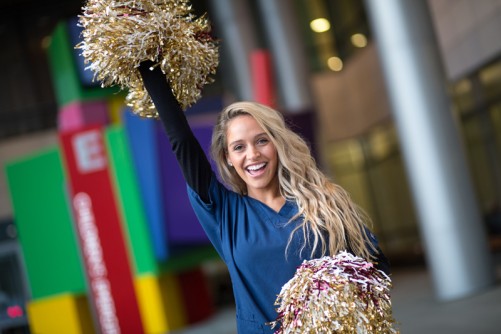 Heather, a nurse in the pediatric intensive care unit at Johns Hopkins Hospital in Baltimore, spends Sundays on the sidelines as an NFL cheerleader.

Newswise — No matter the score, the “First Ladies of Football” can’t let their smiles down. “That’s part of the job,” says Heather, RN, a co-captain of the Washington Redskins cheerleading squad. “We have to continue to try and pump up the fans even when the score isn’t in our favor. It’s a practiced skill.”

It’s also a skill that Heather* has mastered as a pediatric intensive care unit (PICU) nurse at the Johns Hopkins Hospital. As a home-grown Redskins fan, “It’s not easy to be happy when my team is not winning,” she says. Similarly, when obstacles arise for a patient in the PICU, “We still must try to uplift spirits by celebrating the small victories and do our best to be a light of positivity.”

Not that a loss can ever equate with a child’s illness, Heather says. “Win or lose, the players will all wake up the next day with their good health. There are kids here in the hospital who wish they could just play.”

A talent for dance and other movement arts emerged early in life. “I began cheering when I was just 6 years old. I fell in love with the sport and as I continued to grow, so did my passion for performing.”

Heather says she enjoys the challenge of beat-heavy dance routines that draw on hip-hop, jazz, lyrical, and “even a little bit of tap.” For the 34-member Redskins squad’s calendar release party in August, Heather and her “sisters” were rehearsing a number choreographed to the hip-hop anthem “All the Way Up.” At a holiday meet-and-greet with troops and their families stationed in Bahrain, “I got to dress up and dance as Olaf, the snowman from Frozen,” Heather says.

Some could argue that Heather’s grueling schedule might deprive her of any life. Naturally, she doesn’t agree. “If you told me I worked 80 hours a week, I wouldn’t believe you. I love both of my jobs so much for two completely different reasons. I don’t know if I could do one as well without the other.”

Editor’s note: The NFL requests that its professional cheerleaders’ last names not be published.