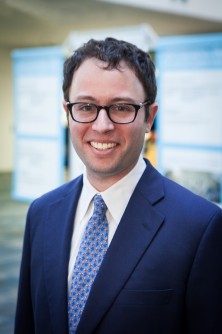 Mark Neuman, MD, MSc, an assistant professor of Anesthesiology and Critical Care and Senior Fellow in the Leonard Davis Institute of Health Economics at the Perelman School of Medicine at the University of Pennsylvania

Newswise — PHILADELPHIA – Nursing home care quality does not impact the likelihood of patients being readmitted to the hospital or dying within 30 days of discharge from hospital to nursing home, according to a new analysis of Medicare data and nursing home performance measures by Penn Medicine researchers. Their findings are published this week in JAMA.

“Our goal here was to get a picture of what is happening when patients go to a SNF after hospital discharge, and we found that some of the assumptions about the impact of nursing home quality on outcomes may have been overstated,” says the study’s lead author, Mark Neuman, MD, MSc, an assistant professor of Anesthesiology and Critical Care and Senior Fellow in the Leonard Davis Institute of Health Economics at the Perelman School of Medicine at the University of Pennsylvania. “Readmissions are costly, potentially preventable, and common, and hospital staff and caregivers need to know more about what factors may help ensure the best outcome for their patient or loved one following hospital discharge.”

The Penn researchers examined more than 1.5 million Medicare patient discharges from 3,537 nonfederal acute care hospitals between September 1, 2009 and August 31, 2010 to 14,251 Medicare Skilled Nursing Facilities (SNFs) for postacute care. In more than 20 percent of cases studied, patients returned to the hospital within 30 days, and about five percent of patients died within 30 days. The analysis excluded patients hospitalized for a psychiatric condition, rehabilitation or medical cancer treatment.

The team found that the risk of readmission or death within 30 days was lower for discharges from SNFs with better staffing ratings, better facility inspection ratings and lower rates of new or worsening pressure ulcers. Performance in all of these measures is tracked by the Centers for Medicare and Medicaid Services and is publicly available on the Nursing Home Compare web site. Rates of readmission or death were also lower at nursing homes that had a higher percentage of patients with moderate to severe pain and acute delirium. However, in analyses that accounted for important patient characteristics such as age, sex, comorbidities, and the reason for hospitalization, the quality of care of the discharging hospital and SNF facility characteristics, outcomes did not vary meaningfully across SNFs that differed in staffing ratings or their performance on clinical measures related to pain or delirium. As a whole, the team found that better performance in these quality measures was not consistently associated with lower adjusted risk of readmission or death at 30 days.

Previous studies have suggested that SNF quality may be associated with the risk of hospital readmission. But, these studies have focused on small groups of hospitals and selected subsets of patients.

Because past analyses have not accounted for hospital effects, their comparisons across SNFs did not take into account differences in the quality of care at discharging hospitals. “Our study,” says Neuman, “takes a more comprehensive approach that includes all fee-for-service Medicare beneficiaries admitted to SNFs for postacute care.”

“Understanding differences in quality between hospitals is an important part of understanding why certain SNFs have higher rates of readmission than others, and figuring out the contribution of hospitals and SNFs, both alone and in combination, to overall patterns of readmission, is an important next step for research,” adds Neuman. “This work also suggests the need for further efforts to develop metrics that influence hospital readmission rates among SNF patients.”

Penn Medicine is one of the world's leading academic medical centers, dedicated to the related missions of medical education, biomedical research, and excellence in patient care. Penn Medicine consists of the Raymond and Ruth Perelman School of Medicine at the University of Pennsylvania (founded in 1765 as the nation's first medical school) and the University of Pennsylvania Health System, which together form a $4.3 billion enterprise.The Perelman School of Medicine has been ranked among the top five medical schools in the United States for the past 17 years, according to U.S. News & World Report's survey of research-oriented medical schools. The School is consistently among the nation's top recipients of funding from the National Institutes of Health, with $392 million awarded in the 2013 fiscal year.