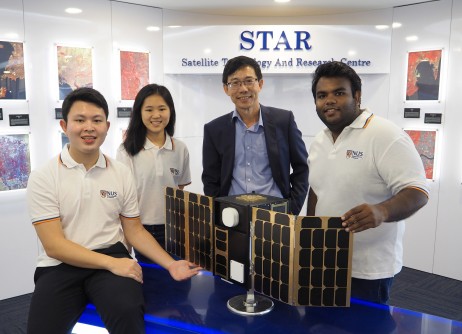 Professor Low Kay Soon (second from right), Director of the Satellite Technology and Research Centre at NUS, together with his students from NUS Engineering. On display is a model of a small satellite that is being developed for applications such as maritime and aviation security.

Newswise — The Faculty of Engineering at the National University of Singapore (NUS) and the DSO National Laboratories (DSO) jointly launched the Satellite Technology and Research Centre (STAR) to develop cutting-edge capabilities in distributed satellite systems, with a focus on flying multiple small satellites in formation or constellation. The new centre, which was inaugurated today by Professor Ho Teck Hua, NUS Senior Deputy President and Provost, will also train undergraduates and graduate students to meet the manpower needs of Singapore’s fledgling space industry.

Supported by the Singapore Economic Development Board, STAR is helmed by Professor Low Kay Soon, who is from the Department of Electrical and Computer Engineering at the NUS Faculty of Engineering. The centre will pioneer experimental satellite platforms, with a focus on the development of small satellites, and will deepen the local base of expertise in space and satellite technologies. In contrast to the traditional approach of building large satellites (weighing between a few hundred to a few thousand kilogrammes), STAR will build multiple small satellites, each weighing less than one tenth of conventional satellites, and fly them together. STAR’s 1,400 sqm facility is currently home to 50 research staff and students.

“NUS made its first foray into space in 2015 with the successful launch of two satellites, which demonstrated our strong capabilities in engineering and satellite technologies. The setting up of STAR will further sharpen these strengths and help to nurture a new generation of well-trained engineers and engineer-leaders who are ready to contribute to the space and aerospace industries,” said Professor Chua Kee Chaing, Dean of NUS Faculty of Engineering.

“Satellite engineering is the pinnacle of engineering. As a national laboratory, DSO has developed strong capabilities in systems engineering, and we are excited to be able to contribute our expertise in this field to the vision of STAR – a leading centre for advanced distributed small satellite systems – to excite and nurture students to be future satellite engineers,” said Mr Cheong Chee Hoo, Chief Executive Officer of DSO.

In the early years of mankind’s first foray into space, satellites were large in size, extremely expensive, and they usually take years to build. However, in the past five years, satellites that weigh no more than 20 kilogrammes have been gaining popularity. This new paradigm shift towards small satellites offers an opportunity for Singapore to carve out a place for itself as a key player in the new satellite application industry.

“Small satellites are relatively cheaper to produce, test and launch. They could also be mass produced and they have a much shorter time to market. A fleet of small satellites – flying in formation, swarm or constellation – could possibly cover the whole Earth and reduce latency, hence opening up new services that were not possible in the past,” said STAR Director Professor Low, who is a veteran of Singapore’s satellite programmes.

“STAR aspires to be a leading centre for advanced distributed satellite systems. We will build and demonstrate the use of small satellites for various applications, such as detection and monitoring of airplanes and ships. Such capabilities will greatly enhance Singapore’s position as an aerospace and maritime hub. STAR will also work with industry players, both established companies and new start-ups, by providing our expertise and state-of-the-art satellite platform or subsystems. Such partnerships are critical in building a vibrant indigenous high-tech satellite industry,” Prof Low added.

STAR will pursue its mission through three structured programmes:

• Education programme
NUS undergraduate students from the Faculty of Engineering will have the opportunity to undertake satellite and space related projects offered by STAR. Involvement in such projects will expose students to real-life project applications, and provide them with valuable multidisciplinary, team-based work experience in the space industry. STAR researchers will also support relevant academic modules, as well as supervise student projects.

• Satellite mission programme
To demonstrate its research capabilities, STAR will use its innovative satellite architecture to develop scalable small satellites of various sizes and weights for different applications. These small satellites will then be launched in space to fly in formation or constellation. STAR aims to develop a fleet of 20-kg satellites that can be deployed in space by 2022, for applications such as maritime and aerospace security. The small satellites can also be equipped with other instrument for remote sensing to monitor environmental change and detect forest fires.

Located within the Singapore Wind Tunnel Facility on the NUS Kent Ridge campus, STAR comprises a state-of-the-art clean room facility for satellite testing and assembly works, electrostatic discharge controlled laboratories for research and student projects, as well as environmental testing facilities such as a thermal chamber and a vacuum chamber.

Prof Low said, “Anchored at NUS, STAR will serve as a hub for research, education and commercialisation of expertise and technologies relating to the space industry. For Singapore to gain a strong foothold in this knowledge-intensive sector, it is crucial to develop a vibrant space innovation ecosystem comprising a critical mass of home-grown talents, a thriving space industry, as well as a conducive research environment where scientists, engineers and industry partners jointly innovate and create new technologies to address satellite technology challenges. Leveraging STAR’s capabilities, NUS Engineering can play a key role in shaping Singapore’s future as a spacetech leader.”