Newswise — Butterflies often display strikingly different colour or patterns on the dorsal (top) and ventral (bottom) sides of their wings. A study by researchers from the National University of Singapore (NUS) has revealed that the gene apterous A is responsible for the appearance of the dorsal wings of butterflies.

This interesting discovery was made when Associate Professor Antonia Monteiro and her PhD student, Ms Anupama Prakash, who are from the Department of Biological Sciences at the NUS Faculty of Science, studied the expression and functions of apterous A in the African squinting bush brown butterfly, Bicyclus anynana, which has a well annotated genome, during its wing developmental stage.

The diversity in the appearance of the dorsal and ventral wings of many butterflies has evolved due to the varying functions of each wing surface.

When the butterflies are resting with their wings closed, the ventral surfaces are exposed; the patterns on these surfaces usually enable camouflage and avoidance of predators. In contrast, the dorsal surfaces, seen when the wings are opened, are often coloured and patterned specifically to attract potential mates. The mechanisms involved in how these distinct differences occur, however, were not clear.

apterous A gene responsible for unique appearance of dorsal wing

The gene apterous A has been found to play a role in the wing development of some insect species, in functions such as the outgrowth of the wing and determination of the dorsal-ventral boundary. The research team thus hypothesised that it could be involved in differentiating the appearance of the two wing surfaces.

The NUS biologists investigated the expression of apterous A in the butterfly’s wings and then selectively removed it from the genome in a gene knockout process to verify its functions in wing development and patterning.

The experiments revealed that apterous A was expressed solely on the dorsal wing surfaces of the butterflies, and not on the ventral surfaces. Additionally, during the gene knockout process, the researchers discovered that mutating apterous A in the butterflies’ genome caused defects in wing development.

However, the scientists also observed additional effects on the butterfly wings.

“When this gene is mutated, the dorsal wing patterns of butterflies with the mutated genome develop the same patterns as their ventral wing surfaces. This means that apterous A is involved in the determination of the appearance of the dorsal surface,” said Ms Prakash.

During their studies, the NUS team discovered that apterous A also acts as an inhibitor of the formation of eyespot patterns — markings that resemble an eye — on the dorsal surfaces of the butterfly wings. When the gene was deleted, multiple additional eyespots developed on these dorsal wing surfaces – as many as the number present on the ventral surfaces.

“In the evolution of butterfly wing patterns, eyespots appeared on the dorsal wing surfaces of butterflies long after their origin on the ventral surfaces, but the reason for this was unclear,” said Assoc Prof Monteiro.

She added, “We discovered that in the small regions on the dorsal wing surfaces where a few eyespot centres were observed, there was an absence of apterous A gene expression. This implies that the local repression of apterous A is likely to have caused eyespots to finally develop at these locations.”

The researchers also noticed that the presence of the apterous A gene had an effect on sex-specific wing traits on the fore- and hindwings on the dorsal surfaces. On males’ dorsal forewings, it acts as a repressor, inhibiting the male pheromone producing organs and silver scale development. On their dorsal hindwings however, it acts as an activator, promoting the development of pheromone disseminating hairs and silver scales.

The NUS researchers believe that the apterous A gene likely interacts with other sex-specific and wing-specific factors to impact the development of these traits.

Application as a biomarker and future work

“This study has identified a gene that influences surface-specific wing patterns in butterflies. This can potentially be used as a biomarker to understand how specific cells produce the different colours and patterns that we see on butterfly wings,” said Ms Prakash.

“Since apterous A is expressed only in cells of the dorsal surface, we can now identify dorsal-specific cells based on this gene expression. This is very useful if, for example, we want to study how a certain colour develops. In some butterfly species such as the Morphos, the ventral surface is mostly brown while the dorsal surface is blue. Isolating dorsal-specific cells by using apterous A as a marker can help us study how these blue scales are developing,” she elaborated.

Looking forward, the research team will continue studying the function of the apterous A gene in butterflies. This will include determining if the gene performs similarly in other families of butterflies, and in butterflies without surface-specific wing patterns, as well as investigating the way it represses eyespot pattern development.

The findings were published in Proceedings of the Royal Society of London in early 2018. 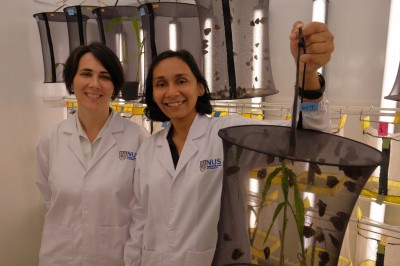 Caption: Biologists Associate Professor Antonia Monteiro (left) and Ms Anupama Prakash (right) from the National University of Singapore discovered that the gene apterous A is responsible for the appearance and sex-specific traits of the dorsal wings of the African squinting bush brown butterfly. 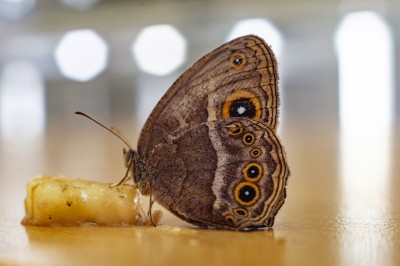 Proceedings of the Royal Society of London