6-Jul-2017 5:05 AM EDT, by National University of Singapore
favorite_border 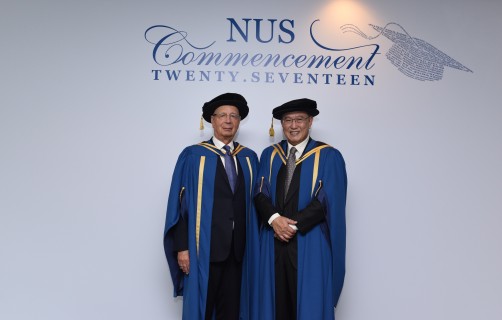 The National University of Singapore (NUS) conferred the Honorary Doctor of Letters on Professor Klaus Schwab, Founder and Executive Chairman of the World Economic Forum (left), and Mr Gerard Ee, Chairman of Charity Council, Chairman of Eastern Health Alliance and President of the Institute of Singapore Chartered Accountants (right). 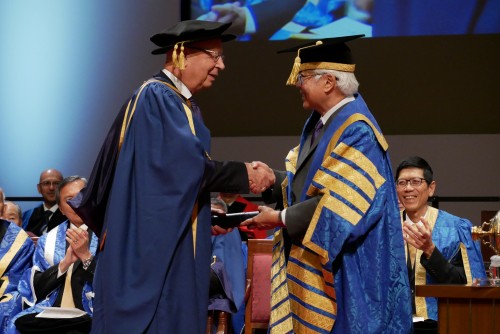 His Excellency Dr Tony Tan Keng Yam, President of the Republic of Singapore and NUS Chancellor (right), conferred the Honorary Doctor of Letters on Professor Klaus Schwab (left), in recognition of his outstanding international leadership contributions. 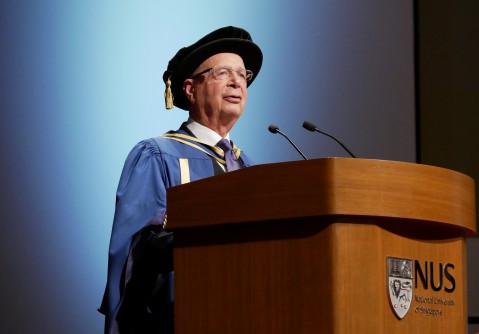 Newswise — The National University of Singapore (NUS) today awarded honorary degrees – the University’s highest honour – to Professor Klaus Schwab, Founder and Executive Chairman of the World Economic Forum (the Forum), and Mr Gerard Ee, who is Chairman of Charity Council, Chairman of Eastern Health Alliance and President of the Institute of Singapore Chartered Accountants.

His Excellency Dr Tony Tan Keng Yam, President of the Republic of Singapore and NUS Chancellor, conferred the Honorary Doctor of Letters on Prof Schwab and Mr Ee at the Main Ceremony of NUS Commencement 2017. About 230 graduates from NUS School of Computing, NUS Business School and Yale-NUS College were also conferred their degrees.

The NUS Class of 2017 comprises 10,654 graduates – 6,622 students will receive bachelor degrees and 4,032 will receive graduate degrees. A total of 24 ceremonies will be held at the NUS University Cultural Centre over a period of eight days, from 6 to 13 July 2017. NUS Commencement 2017 will conclude with the Commencement Dinner, which will be held on Friday, 14 July.

NUS President Professor Tan Chorh Chuan said, “NUS has a long and proud tradition of graduates who have forged their distinctive paths and contributed in many different ways to the nation and society. Our global and well-rounded education experience prepare graduates to meet the challenges of a rapidly changing global landscape, to seize new opportunities and to make a difference in society. As our graduates move forward to work or further studies, I urge them to embrace a positive attitude, passion as well as perseverance. On behalf of the NUS community, I wish the Class of 2017 every success in the areas they choose to pursue, excel and contribute.”

“NUS is greatly privileged to be able to confer honorary degrees on two truly remarkable individuals - Professor Klaus Schwab and Mr Gerard Ee, who are both wise and transformative leaders. Their remarkable contributions have transformed the lives of many in Singapore and around the world. Prof Schwab’s amazing vision and leadership have made the World Economic Forum the pre-eminent platform for engagement and cooperation across multiple stakeholders, to address the world’s greatest challenges and opportunities.  Mr Ee has been a true pioneer and leader in community service and charitable work which over several decades, have had a deep and uplifting impact on Singapore society. The work and achievements of Prof Schwab and Mr Ee serve as an inspiration to the entire NUS community to pursue true excellence in our chosen fields, to be undaunted in tackling big challenges, and to continually strive to make a difference to the lives of those here in Singapore and the world,” Prof Tan added.

This year, NUS will be presenting pioneer graduates from the following programmes:

Prof Klaus Schwab was conferred the Honorary Doctor of Letters in recognition of his outstanding international leadership contributions, his high international standing and his significant contributions to NUS as a global university.

Prof Schwab earned a Doctorate in Engineering at the Swiss Federal Institute of Technology, a Doctorate in Economics at the University in Fribourg, and a Master of Public Administration at the John F. Kennedy School of Government, Harvard University.

Prof Schwab founded the World Economic Forum in 1971 as an independent, impartial, not-for-profit Foundation committed to improving the state of the world. Under Prof Schwab’s exceptional intellectual and personal leadership, the Forum has become the world’s foremost platform for public and private cooperation. The Forum has been driving reconciliation efforts in different parts of the world, acting as a catalyst for numerous collaborations and international initiatives.

Prof Schwab built the World Economic Forum into the foremost global multistakeholder community, integrating political, business, academic and civil society leaders. The Forum, with 700 staff at its headquarters in Geneva and offices in San Francisco, New York, Tokyo and Beijing, is the catalyst of numerous initiatives shaping the global, regional and industry agendas.

Prof Schwab established the Forum of Young Global Leaders in 2004, and the Global Shapers Community in 2011, to integrate young people as a strong voice for the future into global decision-making processes and to encourage their engagement in concrete projects that address social problems.

During the course of his wide-ranging and inspirational career, Prof Schwab received numerous international and national honours. He holds 15 honorary doctorates, and national medals of honour, including the Grand Cordon of the Order of the Rising Sun of Japan, the Grand Cross with Star of the National Order of Germany and the Knight of the Légion d’Honneur of France. He was also knighted by Queen Elizabeth II – Knight Commander of the Order of Saint Michael and Saint George (KCMG). His latest book is The Fourth Industrial Revolution (2016), a worldwide bestseller translated in over 20 languages.

For more than a decade, Prof Schwab has been strongly supportive of NUS’ active participation in the Forum’s wide range of activities. He maintains an active personal interest in the work of NUS and this has led to a broad and multifaceted engagement between NUS and the Forum. In turn, this has contributed to NUS’ rapid development as a global university, and added to NUS’ international stature and reputation. At the same time, Prof Schwab has been a strong friend of Singapore, and has actively engaged with members of the Singapore government and key opinion leaders in Singaporean society.

Prof Schwab said, “I am grateful and humbled by this honour conferred to me by the National University of Singapore, and I gladly accept it on behalf of my colleagues at the World Economic Forum. Singapore has been a pioneer in East Asia, and globally, in striving for excellence and outstanding results. As a leading institution of higher education, the NUS can be proud of its contribution and achievements along this admirable path.”

Mr Gerard Ee was awarded the Honorary Doctor of Letters in recognition of his outstanding achievements in community service and charity work, which have benefitted Singapore and uplifted the lives of countless Singaporeans, particularly those who are relatively disadvantaged.

Under his capable leadership at the National Council of Social Service, there has been improved accountability and transparency of voluntary welfare organisations (VWOs) through the launch of the Code of Governance and Management for VWOs in July 2003. He also provided leadership for strengthening the service through setting up the Social Service Training Institute.

Mr Ee has deep ties with the NUS Department of Social Work. He was a member of the fundraising committee for the S R Nathan Professorship in Social Work, which aims to support the long term goal of promoting social work education and encouraging research among scholars in Singapore and Asia on issues related to social development, poverty and asset building. Mr Ee was also advisor to the Ee Peng Liang Memorial Fund, which was established in 2002 to encourage people to make a positive difference in the lives of others. In addition, Mr Ee is a member of the Resource Committee on research relating to accountability of the social service sector, chaired by NUS Centre for Social Development Asia.

Mr Ee said, “I am most honoured to be conferred the Doctor of Letters and it is just the encouragement which will fuel my continuing efforts to make a difference in the community.”