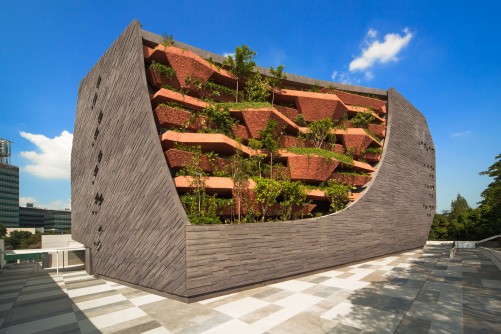 Newswise — Singapore, 18 April 2015 – The National University of Singapore (NUS) today launched the Lee Kong Chian Natural History Museum (LKCNHM), Singapore’s first and only natural history museum. Its roots can be traced to the original Raffles Museum, which is the oldest such institution in the region. His Excellency Dr Tony Tan Keng Yam, President of the Republic of Singapore and NUS Chancellor, graced the official opening of the museum, in the presence of over 250 guests.

Established through philanthropic gifts totalling S$56 million, LKCNHM strives to be a leader in Southeast Asian biodiversity and conservation research, education and outreach.

NUS President Professor Tan Chorh Chuan said, “The opening of the iconic Lee Kong Chian Natural History Museum is of special significance to the NUS community, as we celebrate the University’s 110th Anniversary and Singapore’s 50th year of independence this year. This new, state-of-the-art museum and research centre will greatly boost NUS’ efforts in biodiversity education, research and conservation.

We are deeply grateful for the steadfast support from generous donors, faculty, staff, students, as well as friends here and overseas, for making this endeavour possible. All of you, together with my colleagues Professor Leo Tan and Professor Peter Ng, have given Singapore and NUS a truly world-class natural history museum we can all be proud of.”

Professor Leo Tan, Chair of LKCNHM’s Fundraising Committee and Director of Special Projects, Faculty of Science, said, “The Lee Kong Chian Natural History Museum is a biodiversity museum, not only of Singapore but of Southeast Asia. It behooves us to demonstrate to future generations the beauty of our natural history and the vital role it plays in ensuring the survival of the human race. I am indebted to those who have generously helped both financially and in-kind, to make this museum a reality! But our journey must not end here – the opening should be the start to an even more important and exciting one to come! We will therefore continue to need the support of the community, including the corporate sector, to ensure the museum stays on a sustainable footing as it grows into new vistas.”

Helmed by Professor Peter Ng, the LKCNHM is staffed by 16 scientists, curators, museum officers, and collection staff as well as 18 outreach officers and administrative staff. The museum, which is a seven-storey building providing 8,500 square metres of space, is home to over 560,000 catalogued lots and over a million specimens from throughout the region, forming an important research resource for Southeast Asian biodiversity researchers.

The main gallery consists of 15 zones, tracing the history of life on earth. Different sections are devoted to the origin of life and all major branches of the Tree of Life. This includes green plants, major groups of fungi, molluscs, arthropods, birds, and mammals. Other sections are dedicated to demonstrating how terrestrial vertebrates evolved from “fish” and why birds are surviving “dinosaurs”.

Complementing the main gallery on the mezzanine floor is the heritage zone, where the history of the Raffles Museum and LKCNHM forms the backdrop to the history of Singapore’s biodiversity research. This gallery houses the so-called Cabinet of Curiosities where visitors can “explore” Singapore’s history of biodiversity exploration, find out more about the men and women who helped build this, and the biological treasures they have accumulated over 137 years. It also has a zone titled “Singapore Today”, which showcases the geology of the island as well as the important conservation work done by national agencies.

The entire gallery has been planned not just to expose nature lovers to Southeast Asian and Singapore biodiversity, or to be merely a specimen-based education tool for students of science. The journey through the gallery is also designed to be an experiential one, with the layout as well as kind of historical specimens chosen intended to maximise this outcome. The gallery is complemented by a web-based app that allows visitors to find out more about whichever plant, animal or scientific fact they are most interested in.

To celebrate the official opening of the LKCNHM, a book titled “Of Whales And Dinosaurs – The Story of Singapore’s Natural History Museum” which details the history of the museum and a set of commemorative stamps were presented to guests.

LKCNHM is home to the three much talked-about diplodocid sauropod skeletons, nicknamed Prince, Apollonia and Twinky. Each of them is about 80 per cent complete, making them a rarity in sauropod dinosaur discoveries. These three skeletons were found between 2007 and 2010 in a quarry in a small town of Ten Sleep in the United States and are believed to be part of a herd or even a family. These dinosaurs are the main attraction of the main gallery, showcasing the diversity and history of life on Earth. As one of the largest animals ever to live on the planet, they are an excellent showpiece to demonstrate extinction events and how life has evolved.

The LKCNHM is also a treasure trove of the region's rich natural heritage. Its internationally renowned Zoological Reference Collection, formerly called the ‘Raffles Collection’, dates back to 1849 and is one of the largest collections of Southeast Asian fauna in the region with over 560,000 catalogued lots and over a million specimens in total. It is the national focus point for all zoological material, and has one of the most comprehensive collections of Singapore and Malayan animal specimens in the world. Of significance are the 150,000 specimens of Southeast Asian vertebrates, including one of the best bird and freshwater fish collections internationally.

One of the most prized possessions on show at the museum is an Asian Brown Flycatcher bird collected by British naturalist Alfred Russel Wallace, the co-founder of the theory of evolution.

Complementing the bird and freshwater fish collections is the NUS Herbarium, founded in 1955, which documents over 33,000 plant specimens, mainly from Singapore and Malaysia. Visitors would also have the opportunity to see stick insects as well as mudskippers in some of the live exhibits.

The overall collection, however, is much larger as there are thousands of unsorted bottles and drums from numerous studies, expeditions, surveys and donations from throughout the region. Dozens of major collections from Singapore, Indonesia, Philippines, Malaysia, Vietnam and Thailand are still being studied and will slowly be catalogued. For example, the four-year study of Singapore’s marine biodiversity by NUS and government agencies obtained hundreds of thousands of specimens which are still being sorted. There are also hundreds of thousands of invertebrates from the recent Mangrove Insect Project and various university biomonitoring programmes. The total collection of the museum to date comprises over a million specimens.

The collections have grown by some 50% since the late 1990s, arising from active research by the museum’s scientists, regional collaborations and many expeditions over the years. The museum also has a modern cryofacility using liquid nitrogen to store over 12,000 important plant and animal tissue samples as well as modern facilities for molecular work. More than 90 per cent of the museum’s specimens are used for research by academics, students and scientists from Singapore and the world; generating more than 70 scientific publications every year.

Staff of LKCNHM and students of the NUS Department of Biological Sciences actively conduct research in conservation biology, ecology, and systematics that covers the terrestrial, freshwater and marine environments. Numerous surveys, expeditions and collaborative work are being conducted in the Asia-Pacific region. Research strengths resident in the museum include systematics of many aquatic and terrestrial arthropods, molluscs, reptiles, amphibians and fish; as well as conservation of small mammals.

LKCNHM offers a range of educational workshops and programmes for schools, the public and corporate groups in the area of natural history and ecology. Examples of such programmes include gallery tours, guided nature walks as well as hands-on workshops that are designed to be fun and interactive. Museum staff and volunteers also engage the community through biodiversity outreach events, nature and heritage trails, and coastal clean-up activities.

Museum AdmissionThe LKCNHM will be open to the public from 28 April 2015.

For information on the LKCNHM, please visit: http://lkcnhm.nus.edu.sg/

About National University of Singapore (NUS)

A leading global university centred in Asia, the National University of Singapore (NUS) is Singapore’s flagship university, which offers a global approach to education and research, with a focus on Asian perspectives and expertise. NUS has 16 faculties and schools across three campuses. Its transformative education includes a broad-based curriculum underscored by multi-disciplinary courses and cross-faculty enrichment. Over 37,000 students from 100 countries enrich the community with their diverse social and cultural perspectives. NUS has three Research Centres of Excellence (RCE) and 26 university-level research institutes and centres. It is also a partner in Singapore’s fifth RCE. NUS shares a close affiliation with 16 national-level research institutes and centres. Research activities are strategic and robust, and NUS is well-known for its research strengths in engineering, life sciences and biomedicine, social sciences and natural sciences. It also strives to create a supportive and innovative environment to promote creative enterprise within its community. This year, NUS celebrates its 110th year of founding together with Singapore’s 50th year of independence. As the island’s first higher education institution established by the local community, NUS prides itself in nurturing generations of leaders and luminaries in Singapore and Asia. For more information on NUS, please visit www.nus.edu.sg. Details on NUS’ 110th Anniversary celebrations are available at nus110.sg.