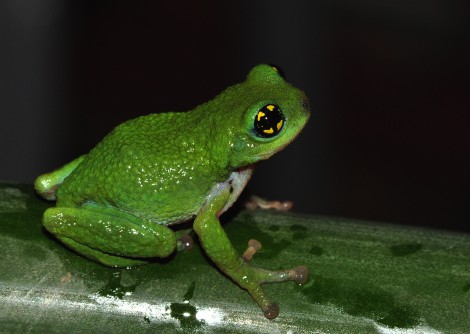 Researchers from the National University of Singapore have discovered a new reproductive mode in frogs and toads - breeding and laying direct developing eggs in live bamboo with narrow openings - which was observed in the white spotted bush frog (Raorchestes chalazodes). 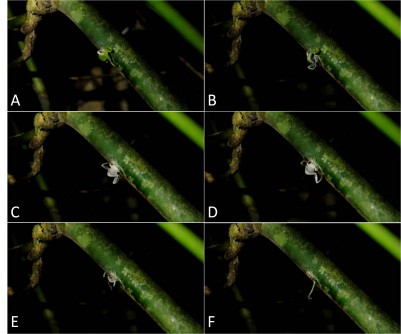 Adult male Raorchestes chalazodes enters hollow internodes of the flute bamboo Ochlandra travancorica where they vocalise to attract mates. It enters the bamboo with considerable resistance as the narrow openings are often less than 5 to 10 millimetres long and 3 to 4 millimetres wide.

Newswise — Researchers from the National University of Singapore (NUS) have discovered a new reproductive mode in frogs and toads - breeding and laying direct developing eggs in live bamboo with narrow openings - which was observed in the white spotted bush frog (Raorchestes chalazodes). This critically endangered frog is currently only one of two species known to adopt this novel reproductive strategy. The findings were published in The Linnean Society of London’s Biological Journal of the Linnean Society, in October 2014.

Life history strategies to increase reproductive success are termed as reproductive modes. Frogs and toads currently exhibit 40 known reproductive modes, including 17 aquatic modes and 23 terrestrial modes. This study reports the discovery of the 41st reproductive mode which is different from all other known modes – breeding in live bamboo with narrow slits through which adults enter and deposit direct developing eggs and provide parental care. Direct-developing eggs are eggs that hatch as frogs directly. The species of frogs that exhibit this behaviour, R. chalazodes, was thought to be extinct for over 100 years until it was rediscovered recently in the wet evergreen forests of the Kalakad Mundanthurai Tiger Reserve in the Western Ghats. This biodiversity hotspot of India is listed as a UNESCO World Heritage Site.

In this study, Mr Seshadri K S, a PhD student, and Assistant Professor David Bickford from the Department of Biological Sciences at the NUS Faculty of Science, discovered the reproductive strategy of R. chalazodes. Mr Seshadri observed that adult male frogs enter hollow internodes of the flute bamboo Ochlandra travancorica where they vocalise to attract mates. They make their way into the bamboo through a small opening, possibly made by insects. Female frogs are attracted to the calls and follow suit, laying about 5 to 8 eggs inside the bamboo. Other females may also choose to mate with the male frog and deposit egg clutches in the bamboo. The male stays in the bamboo to take care of the eggs, which develop directly into froglets.

Although the adult frog is small, under 25 millimetres in length, it enters the bamboo with considerable resistance as the narrow openings are often less than 5 to 10 millimetres long and 3 to 4 millimetres wide. The researchers observed that R. chalazodes only breeds in bamboo that have openings at the base of the internode as those with openings at the top would result in collection of water, possibly flooding the eggs or drowning the froglets. The adult males actively search for openings in bamboo and possibly defend territories. They leave the bamboo for a few hours in the evening to feed and return to look after the eggs. The researchers made these findings after conducting field observations over a period of six months between 2009 and 2012.

Asst Prof Bickford said, “This is a significant discovery in two ways. First, it reiterates that natural history observations, often ignored, are fundamental for understanding evolutionary ecology. Second, it sets a theoretical foundation to ask several interesting questions about the diversity of reproductive modes and the evolutionary pathways behind such amazing amphibian behaviors.”

The second author of the paper, Dr Gururaja K V from the Centre for Infrastructure, Sustainable Transportation and Urban Planning at the Institute of Science, Bangalore, India, had observed that another species of frogs, known as the Ochlandra reed frog (Raorchestes ochlandrae), breeds in internodes of bamboo. While the geographic ranges of these two species do not overlap and nesting occurs inside different species of bamboo, the reproductive mode is comparable. R. ochlandrae was previously ascribed to a reproductive mode characterised by direct developing eggs deposited in a nest above ground or in the trees. In this study, the researchers did not observe any nest-making behaviour and thus, the mode was reclassified to be the same as R. chalazodes.

The study is timely as R. chalazodes is currently critically endangered with small populations occurring in fewer than five localities. As this species only breeds in bamboo, unregulated overharvesting of bamboo for paper and pulp may destroy breeding habitats and have a negative impact on the long-term viability of populations. It is critical to conduct more studies on these unique frogs, in particular, those that look into developing frog-friendly harvesting techniques in order to conserve them.

Mr Seshadri, the lead author, said, “Amphibians are among the most threatened creatures on earth and yet, we know very little about them. I was enthralled when we observed this behavior and it opened a whole new world for me. There are several evolutionary questions that could be answered by studying this fascinating group of frogs. For example, what transpires inside the bamboo internodes is still a mystery. The Western Ghats is a well-known hotspot for amphibian diversity which is facing threats primarily from habitat loss. If we do not initiate conservation efforts, we may lose everything before we even document anything.”

Dr Gururaja said, “While species diversity has increased, very little ecological information has been added. The recent discoveries of interesting behaviour such as foot-flagging in the dancing frog (Micrixalus kottigeharensis), and clay nest-building in the potter frog (Nyctibatrachus kumbara) are a case in point that there is much more to be discovered in India and Southeast Asia.”