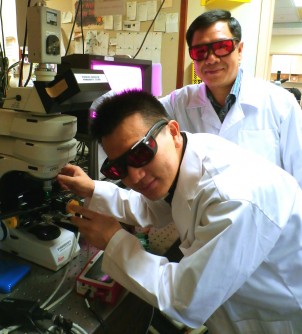 Dr Lu Junpeng (left) and Professor Sow Chorng Haur (right) from the Department of Physics at the NUS Faculty of Science working with the customised focused laser machine. 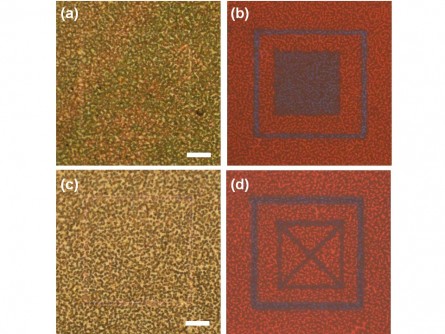 Newswise — The challenges faced by researchers in modifying properties of nanomaterials for application in devices may be addressed by a simple technique, thanks to recent innovative studies conducted by scientists from the National University of Singapore (NUS).

Through the use of a simple, efficient and low cost technique involving a focused laser beam, two NUS research teams, led by Professor Sow Chorng Haur from the Department of Physics at the NUS Faculty of Science, demonstrated that the properties of two different types of materials can be controlled and modified, and consequently, their functionalities can be enhanced.

Said Prof Sow, “In our childhood, most of us are likely to have the experience of bringing a magnifying glass outdoors on a sunny day and tried to focus sunlight onto a piece of paper to burn the paper. Such a simple approach turns out to be a very versatile tool in research. Instead of focusing sunlight, we can focus laser beam onto a wide variety of nanomaterials and study effects of the focused laser beam has on these materials.”

Molybdenum disulfide (MoS2), a class of transition metal dichalcogenide compound, has attracted great attention as an emerging two-dimensional (2D) material due to wide recognition of its potential in and optoelectronics. One of the many fascinating properties of 2D MoS2 film is that its properties depend on the thickness of the film. In addition, its properties can be modified once the film is modified chemically. Hence one of the challenges in this field is the ability to create microdevices out of the MoS2 film comprising components with different thickness or chemical nature.

To address this technological challenge, Prof Sow, Dr Lu Junpeng, a postdoctoral candidate from the Department of Physics at the NUS Faculty of Science, and their team members, utilised an optical microscope-focused laser beam setup to ‘draw’ micropatterns directly onto large area MoS2 films as well as to thin the films.

With this simple and low cost approach, the scientists were able to use the focused laser beam to selectively ‘draw’ patterns onto any region of the film to modify properties of the desired area, unlike other current methods where the entire film is modified.

Interestingly, they also found that the electrical conductivity and photoconductivity of the modified material had increased by more than 10 times and about five times respectively. The research team fabricated a photodetector using laser modified MoS2 film and demonstrated the superior performance of MoS2 for such application.

This innovation was first published online in the journal ACS Nano on 24 May 2014.

In a related study published in the journal Scientific Reports on 13 May 2014, Prof Sow led another team of researchers from the NUS Faculty of Science, in collaboration with scientists from Hong Kong Baptist University, to investigate how ‘drawing’ micropatterns on mesoporous silicon nanowires could change the properties of nanowires and advance their applications.

The team scanned a focused laser beam rapidly onto an array of mesoporous silicon nanowires, which are closely packed like the tightly woven threads of a carpet. They found that the focused laser beam could modify the optical properties of the nanowires, causing them to emit greenish-blue fluorescence light. This is the first observation of such a laser-modified behaviour from the mesoporous silicon nanowires to be reported.

The researchers systematically studied the laser-induced modification to gain insights into establishing control over the optical properties of the mesoporous silicon nanowires. Their understanding enabled them to ‘draw’ a wide variety of micropatterns with different optical functionalities using the focused laser beam.

To put their findings to the test, the researchers engineered the functional components of the nanowires with interesting applications. The research team demonstrated that the micropatterns created at a low laser power are invisible under bright-field optical microscope, but become apparent under fluorescence microscope, indicating the feasibility of hidden images.

To develop materials with properties that can cater to the industry’s demands, Prof Sow, together with his team of researchers, will extend the versatile focused laser beam technique to more nanomaterials. In addition, they will look into further improving the properties of MoS2 and mesoporous silicon with different techniques. 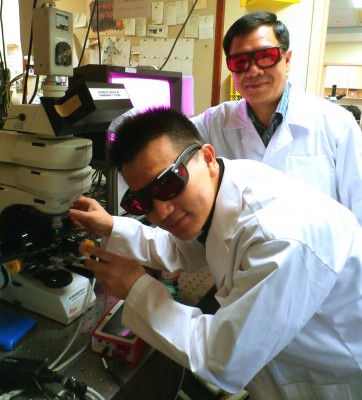 Caption: Dr Lu Junpeng (left) and Professor Sow Chorng Haur (right) from the Department of Physics at the NUS Faculty of Science working with the customised focused laser machine. 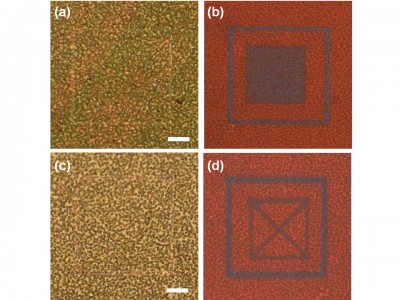