9-Jan-2018 9:45 AM EST, by National University of Singapore
favorite_border 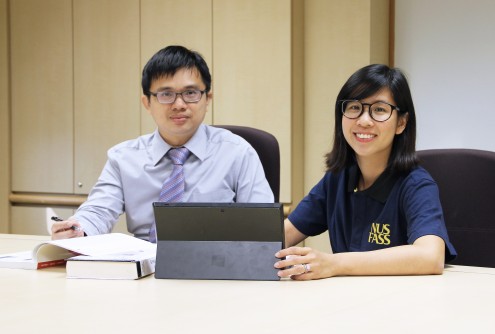 Associate Professor Eddie Tong (left) and PhD student Ms Leung Chi Ching (right), both from the Department of Psychology at the NUS Faculty of Arts and Social Sciences, found that drug abusers who have more grateful dispositions have less severe drug use.

Newswise — People who feel a sense of gratitude tend to be happier, healthier and better in dealing with stress. Two psychologists from the National University of Singapore (NUS) conducted a study on male drug abusers and they discovered that having a grateful disposition was associated with lesser drug use. Grateful abusers, in particular, have less severe drug use, and they are more likely to use positive coping mechanisms – such as taking action to address their problems or seeing the positive aspects of the situation – to manage stress and problems in their lives.

These findings, which were first reported in the journal Substance Use & Misuse, could be incorporated into policies and interventions to help individuals better cope with drug problems.

Drug use remains a serious problem worldwide. According to the World Drug Report 2017 by the United Nations Office on Drugs and Crime, in 2015, about a quarter of a billion people used drugs. Among them, around 29.5 million people, or 0.6 per cent of the world’s adult population, were engaged in problematic use and suffered from drug use disorders. In Singapore, 3,245 drug abusers were arrested in 2016 and among them, about 41 per cent were below 30 years old.

Studies have shown that substance use is a coping response that people adopt to relieve the distress and challenges they face, particularly when they believe that other forms of coping are unavailable or ineffective. Current drug intervention programmes involve methods such as behavioural therapy and counselling.

In recent years, research findings have demonstrated that gratitude, an emotion that involves noticing and appreciating the positive aspects of life, is beneficial to both physical and mental well-being. Hence, there is promise in leveraging on gratitude interventions to benefit drug abusers.

Between April 2014 and November 2015, Associate Professor Eddie Tong and his PhD student Ms Leung Chi Ching, who are both from the Department of Psychology at the NUS Faculty of Arts and Social Sciences, surveyed 105 male drug abusers in Singapore on their drug use and level of dispositional gratitude, a trait characterised by the tendency to notice as well as appreciate positive aspects of life and is often associated with greater well-being.

“As a psychologist with the Singapore Prison Service, I worked with drug abusers and I have seen the harm that drugs bring to them as well as their families. Currently, a lot has been done for drug abusers, and I hope to tap on psychological research to search for more ways to help these individuals. Since positive emotions have been shown to improve lives, I would like to understand how a powerful emotion like gratitude could help drug abusers better cope with their challenges and eventually reduce or eliminate their addictions,” said Ms Leung.

The NUS researchers found that drug abusers who are more grateful have less severe drug use when compared to those who have a less grateful disposition. They also found that the drug abusers who have more grateful dispositions are likely to take an active and constructive approach to manage their problems, and they are less likely to disengage or deny the problem. Highlighting that their findings only revealed the correlation between gratitude and the degree of drug usage, and do not imply how they are causally related, both Assoc Prof Tong and Ms Leung pointed out that more studies using larger samples would be needed to further validate the results. While their study involved only male drug abusers due to the small number of female drug abusers, the NUS researchers noted that it may be worthwhile to examine if the relationship between gratitude and drug use is also applicable to female abusers for future studies.

Their current findings suggest that introducing interventions that harness gratitude may be an effective method to help drug abusers develop better coping skills, which can in turn, support them in their drug rehabilitation. One tested method is to encourage drug abusers to keep a journal to note down things that they feel grateful for on a daily basis. Such interventions are easy to implement and can complement existing therapies to manage drug abuse.

To further their understanding on the impact of gratitude on drug abuse, the NUS researchers will be studying whether gratitude leads to actual reduction in drug consumption over time by looking at whether gratitude reduces the probability of drug abusers returning to drug use.