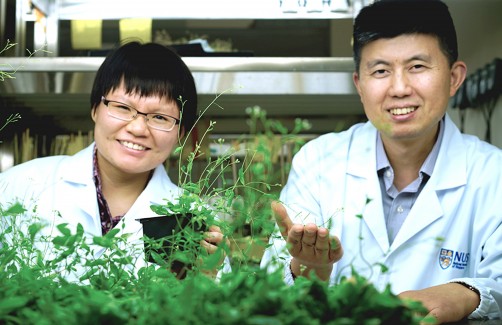 Assistant Professor Xu Jian (right) and Dr Hong Jing Han (left), together with their research team at the National University of Singapore, found that the Arabidopsis (in photo) may selectively kill part of their roots to survive under cold weather conditions.

Newswise — Plants adopt different strategies to survive the changing temperatures of their natural environments. This is most evident in temperate regions where forest trees shed their leaves to conserve energy during the cold season. In a new study, a team of plant biologists from the National University of Singapore (NUS) found that some plants may selectively kill part of their roots to survive under cold weather conditions.

This approach allows the plants to withstand chilling stress and to recover faster when the weather turns better. The discovery and understanding of this survival approach could pave the way for the development of novel strategies to improve the growth and yield of crops that undergo such environmental stress.

The study, led by Assistant Professor Xu Jian from the Department of Biological Sciences at the NUS Faculty of Science, was carried out using a small flowering plant called thale cress, known scientifically as Arabidopsis. This plant is a member of the Brassicaceae family, and its relatives include mustard greens, cabbage and kale.

The research was carried out in collaboration with scientists from the Novosibirsk State University, and the findings were reported in the online edition of the journal Cell on 22 June 2017.

Studies have shown that temperature can induce damage in the deoxyribonucleic acid (DNA) of plant cells, and has a profound effect on plant development and growth. However, its effects on plant stem cell behaviour and activity are still not well understood.

“The study of plant roots has been largely neglected by agricultural researchers in crop improvement until recently. Examining roots is important as they serve as the major interface between a plant and its soil environment, and are responsible for water and nutrient uptake - both resources which are critical for a plant’s survival,” said Asst Prof Xu, who is also from the Centre for BioImaging Sciences at NUS.

The research team conducted experiments on the roots of Arabidopsis, a plant often used as a “model organism” in plant biology and had its genome fully sequenced in 2000. To investigate the effect of chilling temperature on root development and growth, the team used the Arabidopsis root stem cell niche as an experimental model to perform in-depth studies at high spatial and temporal resolutions. The use of such experimental models provides deep insights on the survival strategies that plants employ when the odds are against them.

The research team found that a chilling temperature of four degree Celsius leads to DNA damage in the root stem cells of the Arabidopsis, as well as their early descendants. However, only the columella stem cell daughters die preferentially, and the death of these daughter cells allows maintenance of a functional stem cell niche. On the other hand, inhibition of the DNA damage response in these daughter cells prevents their death. Yet, this increases the probability that the other stem cells in the root stem cell niche will die due to the cold, leading to the plant’s death.

Dr Hong Jing Han, who is the first author of the study, elaborated, “The sacrificial mechanism improves the root’s ability to withstand other low temperature-related stresses. When optimal temperatures are restored, the plant stem cells can divide at a faster rate, which will in turn enhance recovery and survival of the plant.” Dr Hong carried out the research as part of her doctoral thesis under the supervision of Asst Prof Xu.

The research was supported by the National Research Foundation Singapore and the Singapore Ministry of Education.

“Our discovery of how the Arabidopsis plant slays its columella stem cell daughters shed light on the plant’s unique strategy to survive harsh weather conditions, and demonstrates that the potential of engineering cold tolerance in plants to help them withstand harsh environmental conditions. The ability to do so will certainly allow farmers to extend the growing season of crops and the land area in which to grow them, increasing both yield stability and production capacity,” said Asst Prof Xu.

The next step for Asst Prof Xu and his team would be to uncover the gene regulatory network that has underpinned the successful adaptation of plants and their stem cells to cold environments.