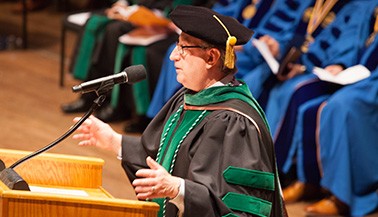 Newswise — Before a full auditorium at David Geffen Hall at Lincoln Center, NYIT’s newest osteopathic medical graduates received their doctoral hoods during a ceremony where speakers urged graduates to treat patients with a dose of compassion and humanity.

Family and friends of the 295 graduates of NYIT College of Osteopathic Medicine (NYITCOM) packed the hall to celebrate with the new doctors as they begin the next chapter of their career: residency training. The Class of 2017 achieved a 100 percent match and placement rate. Of the new physicians, 66 were hooded by family members, and six were recipients of armed forces scholarships and took the military oath of office, administered by Susanne N. Richterich, captain, United States Army.

Keynote speaker Dr. Humayun “Hank” Chaudhry (D.O. ’91), president and chief executive officer of the Federation of State Medical Boards of the United States, the umbrella agency for all state medical licensing boards, reminded graduates to put patients first while embracing the advancement of technology, including telemedicine, in health care.

“Be excited about telemedicine, yes, but follow state laws, understand the limitations of technology, and never use it in a way that sacrifices the safety and privacy of your patients,” said Chaudhry, who received an honorary Doctorate of Science degree yesterday during NYIT’s 56th commencement at the college’s Old Westbury campus.

“Use the power of your touch, give every patient the gift of your beautiful smile, listen to everything they say, compliment them every chance you get. You will not only cure their ills, you will change their lives,” said Gilliar.

Sending his fellow physicians off with a warm farewell, NYITCOM Class of 2017 President Mark Mahan said, “We have all traveled very different paths to reach where we are today, and having made it this far, it would be easy to settle on such amazing accomplishments. Yet, although you have earned the right to wear the coveted long white coat, I hope it will not be the end of your pursuits, but rather just the beginning.”