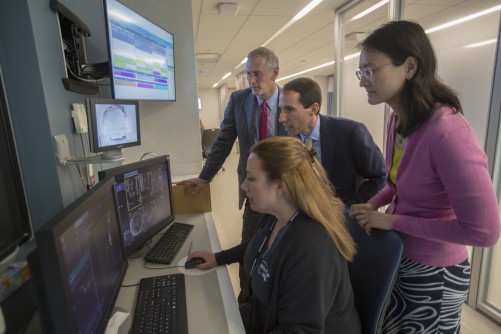 Newswise — NYU School of Medicine’s Department of Radiology is releasing the first large-scale MRI dataset of its kind as part of fastMRI, a collaborative effort with Facebook AI Research (FAIR) to speed up MRI scans with artificial intelligence (AI).

This initial dataset release includes more than 1.5 million anonymous MR images of the knee, drawn from 10,000 scans, in addition to raw measurement data from nearly 1,600 scans. The data release is the latest phase of a collaboration, called fastMRI, between NYU School of Medicine Department of Radiology’s Center for Advanced Imaging Innovation and Research (CAI2R) and Facebook AI Research (FAIR), aimed at sharing open source tools and spurring the development of AI systems to make MRI scans 10 times faster.

This collaboration will promote research reproducibility, provide consistent evaluation methods, and empower the larger community of AI and medical imaging scientists. The joint team will also provide a suite of tools, including baseline metrics to compare results, and a leaderboard to keep track of progress as part of an organized challenge to be announced in the near future.

For additional information about the fastMRI dataset, and to request access from NYU Langone, researchers can visit fastmri.med.nyu.edu. Additionally, FAIR is providing open-source AI models, baselines, and a leaderboard for researchers to share results at fastmri.org.

“We hope that the release of this landmark data set, the largest-ever collection of fully-sampled MRI raw data, will provide researchers with the tools necessary to overcome the challenges inherent in accelerating MR imaging.  This work has the potential to not only help increase access to MR imaging, but also improve patient care worldwide,” says Michael P. Recht, MD, chair and the Louis Marx Professor of Radiology at NYU Langone Health.

Dr. Recht announced the release of the dataset on Sunday, November 25, 2018 during a plenary address at the 2018 Annual Meeting of the Radiological Society of North America (RSNA). While reiterating the goal of even greater acceleration, Recht cited baseline results from FAIR and NYU Langone showing that acceleration of MRI by a factor of four is already possible. He emphasized, though, that broad validation of such early results is essential.

About the Data Set

The imaging dataset used in the project was collected exclusively by NYU School of Medicine researchers. In addition to 10,000 knee MRIs, the dataset also includes raw imaging data from nearly 1,600 cases. The fastMRI project is governed by strict human subject data protection protocols, overseen by NYU School of Medicine’s Institutional Review Board. The work is fully HIPAA compliant and is supported by the world-class information technology team at NYU Langone Health. All data are fully anonymized, stripped of all protected health information including any patient identifiers and potentially distinguishing features. No Facebook data of any kind are used in the project.

While other sets of radiological images have been released previously, this dataset represents the largest public release of raw MRI data to date. The first phase of the project will involve data from knee MRI scans, but future releases will include data from liver and brain scans.

“This collaboration focuses on applying the strengths of machine learning to reconstruct high-value images in new ways. Rather than using existing images to train AI algorithms, we will radically change the way medical images are acquired in the first place,” says Daniel Sodickson, MD, PhD, professor of radiology and neuroscience and physiology and director of CAI2R. “Our aim is not merely enhanced data mining with AI, but rather creating new capabilities for medical visualization, to benefit human health.”

While MRIs provide doctors and patients with a wealth of critical information, capturing unprecedented detail in soft tissues such as organs and blood vessels, they are notoriously slow tests. An MRI scan can take 30 to 45 minutes, and sometimes over an hour depending on the reason for the scan. Using AI, researchers believe it will be possible to capture less data, and therefore image faster, while preserving or even enhancing the rich information contained in MR images.

Leaders of the study say that, if successful, fastMRI could benefit a wide range of people who may have difficulty tolerating lengthy scans, including young children, elderly patients, and claustrophobic individual. It could also decrease the need for anesthesia or sedation. Additionally, the project could expand access to this key diagnostic tool, particularly in areas where there is a shortage of MRI scanners and patients face long wait-times for their scans.

"fastMRI not only could have an important impact in the medical field, it's also an interesting research challenge that will help to advance the field of AI," said Larry Zitnick, Research Manager, Facebook AI Research. "To be medically useful, our AI-reconstructed images need to be more than just good-looking, they must also be accurate representations of the ground-truth, even though they're created from significantly less data. The dataset NYU Langone is releasing and the baseline models we've open-sourced will enable other researchers to join us in working on this challenging problem, and we believe this open approach will bring about positive results more quickly."

“Our collaborative priority for the next phase of this work is to use the experimental foundations that have been established — the data, baselines and evaluation metrics — to further explore AI-based image reconstruction techniques,” says Yvonne Lui, MD, associate professor of radiology and associate chair of artificial intelligence.  “Additionally, any progress made at NYU School of Medicine and FAIR will be part of a larger effort that spans multiple research communities. Results will be compiled and compared on a fastMRI leaderboard, as well as in research papers and workshops to come.”