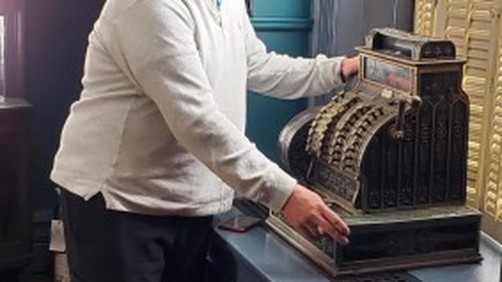 After treatment for tonsil and tongue cancer with single port robotic surgery, chemotherapy and radiation, John Longo, 62, focuses on helping others

When John Longo of Oakland, New Jersey, began to experience persistent pain in the back of his mouth, he thought it was caused by a dental infection. However, when the pain didn’t go away after he had a wisdom tooth pulled, he knew that something more serious was going on.

“After I had my tooth pulled, the pain was still there, and I developed a lump in my neck,” said John. “My doctors ran some tests, and I found out that I had cancer.”

“John had a type of cancerous tumor called a squamous cell carcinoma at the base of his tongue,” said Dr. Park.

Dr. Park said John’s tumor was in part caused by human papillomavirus (HPV), which has been shown to cause cancer in the throat and base of the tongue. John’s cancer likely developed slowly over many years.

“The first thing I thought when I heard I needed head and neck surgery was, ‘They’re going to break my jaw and cut my tongue, and I won’t be able to talk, and I’ll have scars all over the place,” said John.

However, Dr. Park quickly assured John that invasive, disfiguring surgery would not be necessary, thanks to the robotic surgical system.

“During TORS, we don’t need to make any external incisions to remove tumors inside the mouth and throat,” said Dr. Park. “The small surgical instruments on the single port robotic surgical system come out of a single cannula that is inserted into the mouth. They can easily reach the back of the tongue and throat, where the human hand can’t fit.”

The single port robotic surgical system also includes a small camera that transmits an image of the surgical area to the surgical console where Dr. Park sits to operate the robot, giving him a 3D, high-definition, magnified view.

All of these features proved to be beneficial during John’s procedure on October 11, 2019.

In addition to successfully removing the tumor on the base of John’s tongue, Dr. Park also removed several lymph nodes in John’s neck, which required a very small incision.

“I only have a little scar on my neck where Dr. Park removed the lymph nodes near my jugular vein,” said John. “It looks like someone might have scratched me, and you’d never guess it was from surgery.”

“The precision of the single port surgical system is a huge benefit during TORS procedures,” said Dr. Park. “I can operate in confined areas of the throat and base of tongue with precise movements, which lowers the risk of damage to nearby structures.”

After surgery, John spent two days in the hospital. He said he was talking within a half-hour after the surgery and could eat a liquid diet that evening. As he continued to recover, the discomfort in his throat lessened, and he resumed a regular diet.

Due to the aggressiveness of John’s cancer and the numerous lymph nodes involved, he underwent chemotherapy and radiation treatment. This adjuvant radiation treatment is at a lower dose and has fewer side effects than upfront primary radiation. It is often given to patients after TORS to improve survival for aggressive disease.

John said he was fortunate to have the support of his mother, sister, and brother-in-law — as well as friends from his previous job at Porcelanosa — throughout his treatment.

Today, a little more than a year after his surgery, John, now 62, is cancer-free — and he’s finding ways to give back.

An antique shipper with a national moving company, John has a great appreaciation for antiques and looks forward to the second week of February when many cities celbrate Antique & Collectibles Week. When he's not working, John has volunteered to serve at the JBJ Soul Kitchen, a non-profit community restaurant run by the Jon Bon Jovi Soul Foundation.

“I received a second life,” said John. “I want to let everyone know what a great job the team at Hackensack University Medical Center did. I could not have asked for anything better — I’m just giving back what I received.”