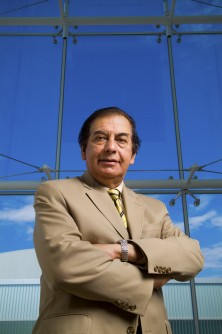 "These findings demonstrate that the effect of obesity is powerful, even in the young," says UB's Dandona, who led the research.

Newswise — BUFFALO, N.Y. -- A study by the University at Buffalo shows for the first time that obese males ages 14 to 20 have up to 50 percent less total testosterone than do normal males of the same age, significantly increasing their potential to be impotent and infertile as adults.

The paper (at http://www.ncbi.nlm.nih.gov/pubmed/22970699) was published online as an accepted article in Clinical Endocrinology.

The authors are the same researchers in the University at Buffalo’s School of Medicine and Biomedical Sciences who first reported in 2004 the presence of low testosterone levels, known as hypogonadism, in obese, type 2 diabetic adult males and confirmed it in 2010 in more than 2,000 obese men, both diabetic and nondiabetic.

“We were surprised to observe a 50 percent reduction in testosterone in this pediatric study because these obese males were young and were not diabetic,” says Paresh Dandona, MD, PhD, SUNY Distinguished Professor in the Department of Medicine, chief of the Division of Endocrinology, Diabetes and Metabolism in the UB medical school and first author on the study. “The implications of our findings are, frankly, horrendous because these boys are potentially impotent and infertile,” says Dandona. “The message is a grim one with massive epidemiological implications.”

The small study included 25 obese and 25 lean males and was controlled for age and level of sexual maturity. Concentrations of total and free testosterone and estradiol, an estrogen hormone, were measured in morning fasting blood samples. The results need to be confirmed with a larger number of subjects, Dandona says.

“These findings demonstrate that the effect of obesity is powerful, even in the young, and that lifestyle and nutritional intake starting in childhood have major repercussions throughout all stages of life,” he says.

In addition to the reproductive consequences, the absence or low levels of testosterone that were found also will increase the tendency toward abdominal fat and reduced muscle, Dandona says, leading to insulin resistance, which contributes to diabetes.

“The good news is that we know that testosterone levels do return to normal in obese adult males who undergo gastric bypass surgery,” says Dandona. “It’s possible that levels also will return to normal through weight loss as a result of lifestyle change, although this needs to be confirmed by larger studies.”

The UB researchers now intend to study whether or not weight loss accomplished either through lifestyle changes or through pharmacological intervention will restore testosterone levels in obese teen males.

Co-authors with Dandona are Muniza Mogri, MD, a medical resident in the UB Department of Pediatrics, Sandeep Dhindsa, MD, clinical assistant professor of medicine at UB; Husam Ghanim, PhD, research assistant professor of medicine; and Teresa Quattrin, MD, A. Conger Goodyear Professor and chair of the Department of Pediatrics, housed in Women and Children's Hospital of Buffalo.