Of Vectors and Spectrums: Documentary Touches Humanity of Autism 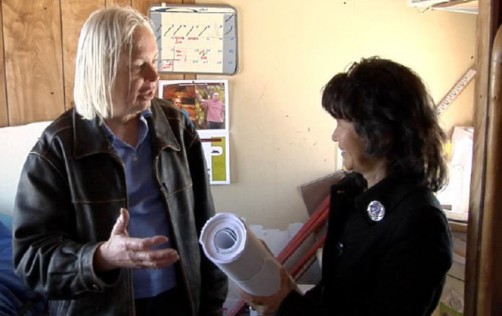 The theme emerges gently, carried on a stream of whimsical background music, as viewers enter Laura Nagle’s world. They discover from the opening scenes that Vectors of Autism presents a frank, artistic portrait of a person who says she is “not good at life.”

That sense of progress, traced from an unkempt kitchen to an orderly space in new living quarters, resonates, informs and inspires. The film, produced by Northern Arizona University education professor Susan Marks to tell Nagle’s story as a window into autism, has already earned two awards and stirred an interest in understanding more about autism and those who live with it.

“We had always wanted there to be a way for people to see and hear about autism from someone who has autism,” said Marks, who turned to NAU graduate John Schaffer to film and direct the documentary.

Nagle had long partnered with Marks as a public presenter at conferences and other gatherings, so she was the clear choice to offer an adult perspective of autism while promoting neurodiversity—a term that emphasizes “differences, not deficiencies,” Marks said.

Nagle’s differences establish themselves quickly. She offers with stark honesty that she is “a wreck,” attested to by her disheveled surroundings and an asynchronous style of dialogue, but what slowly comes into focus as the film unfolds are her extraordinary talents and edgy sense of humor.

She can design a building to blueprint specifications and insightfully dissect complex engineering concepts, all with only a high school education and no formal training. Flying machines and the smell of tires fascinate her. Yet understanding how to charge for her work, whether freelance architectural design or professional presentations, evades her.

Earning a living endures an uneven fate as Nagle simply tries to live the sort of life most people take for granted.

The struggle defines autism, a condition that lies beneath layers of opacity even while becoming more prominent as a diagnosis. The latest estimates from the Centers for Disease Control are that autism is found in 1 out of 50 children. Exactly what that means for a condition with traits that range on a wide spectrum is as confusing for the experts as for the public.

Marks said autism can be “an invisible disability” but with recognizable qualities, such as social interaction difficulties and routine patterns of behavior. Nagle, for example, “struggles with reading the social nuances of complex social interactions, which has affected her ability to keep jobs despite her ability to perform the tasks of the job.” She experiences heightened sensitivities to sensory stimuli.

“I believe all of those qualities are what has made it difficult for Laura to make a living,” Marks said.

Yet as the film reveals, Nagle has not spent her life stuck at a definable point developmentally or socially. She’s learned “subroutines,” as she calls them, to get by in daily life, and she continues to add more. Her straightforward, occasionally acerbic, style is reflected on her website and Twitter account (@HardAspie).

“I hope the movie conveys that a person does not stop growing,” Marks said. “After all, none of us did. Why would we expect that a person with autism, once they graduate from high school, is who they are going to be their whole life?”

As Vectors of Autism makes the rounds at film festivals and other showings—it won “Heart of the Festival” at the Sedona International Film Festival and has earned the American Association on Intellectual and Developmental Disabilities 2013 Media Award—Nagle uses the documentary during her own presentations. Marks said the hope remains that sales of the movie can supplement Nagle’s income as she keeps working to forge a life for herself.

Marks said that viewers have reacted with praise, understanding and gratitude. Faculty have remarked that they now understand that some of their students may be autistic. Adults on the autism spectrum see a story that is very much like their own.

“We didn’t want to create a story that would convey a sense of pity for people, so I think they get that Laura’s really cool but that it really sucks that such a talented person couldn’t make a living,” Marks said.

Certificate program at NAUNAU offers a graduate certificate program in autism spectrum disorders, for which Susan Marks is the student-teaching supervisor. The program prepares students for more effective intervention in schools. Marks, a board certified behavioral analyst, stresses a values-oriented approach for participants.