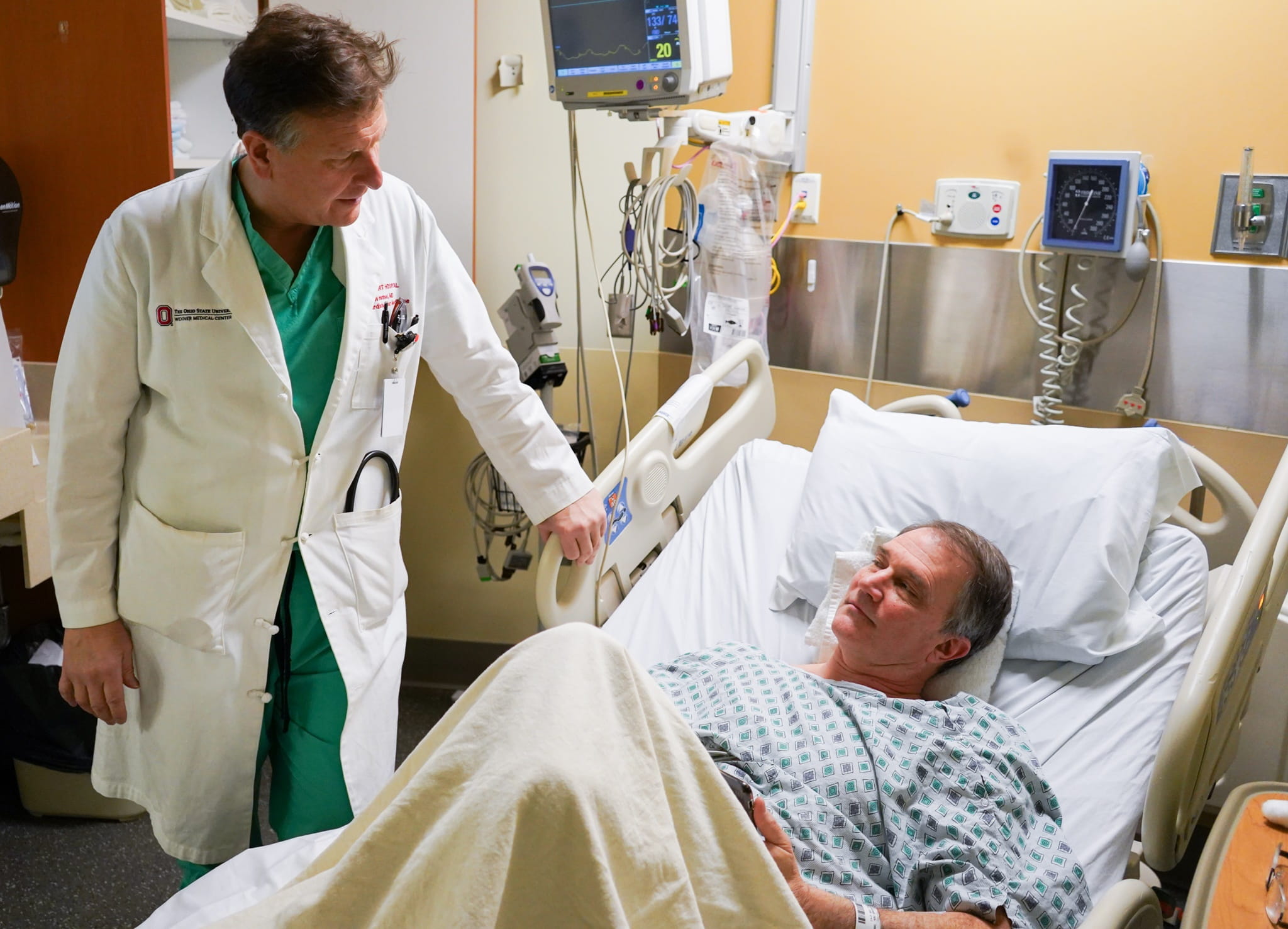 Dr. John Hummel (left) speaks to Rick Lang before he undergoes a heart ablation to treat his atrial fibrillation at The Ohio State University Wexner Medical Center. Rick was the first patient in the U.S. to receive an ablation using a new device that emits small electrical pulses, which experts hope will make the procedure safer and more effective. 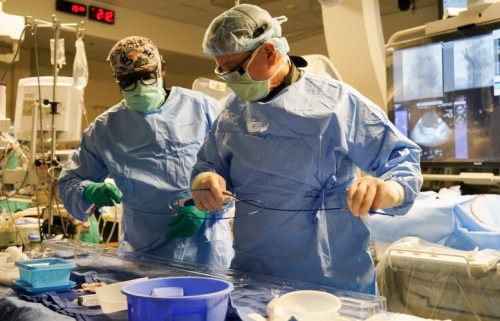 Newswise — COLUMBUS, Ohio – Cardiologists at The Ohio State University Wexner Medical Center are the first in the United States to test a new type of ablation technology for patients suffering from atrial fibrillation, a common type of irregular heartbeat.

The team’s participating in a global clinical trial to assess pulsed field ablation (PFA) technology to treat patients with atrial fibrillation. Developed by Medtronic, the PulseSelect PFA System uses pulsed electric fields to interrupt pathways and atrial fibrillation triggers in the heart. Doing so can help the heart restore its regular rhythm. Unlike traditional methods, this technology is non-thermal (meaning there is no heat or extreme cold) and can efficiently isolate the pulmonary veins, which are a major source of triggers of the arrhythmia.

“This new technology is potentially everything we’ve hoped for in catheter ablation. It’s easier to use, more efficient and will be better for patients because there’s less risk of damage to surrounding tissue and a shorter recovery time. It also may eliminate the need for overnight hospital stays,” said Dr. John Hummel, an electrophysiologist at Ohio State’s Richard M. Ross Heart Hospital, who performed the first procedure on a patient in the United States.

“Whenever you do an ablation, there’s the risk that it can cause damage to structures around the heart as heat or cooling spreads beyond the heart border,” he said. “But this type of energy delivery is nonthermal, and heart muscle cells are uniquely sensitive to it, thus helping to avoid affecting other types of tissue around the heart. It’s also very rapid and will likely significantly cut down on surgery time.”

At least 2.7 million Americans live with atrial fibrillation. It can lead to blood clots, stroke, heart failure and other complications, according to the American Heart Association. It’s common among people with coronary heart disease, valve disease, an inflamed heart muscle or lining or those who’ve had a heart attack, congestive heart failure or heart surgery. Other risk factors include high blood pressure, clogged arteries, diabetes, overactive thyroid, emphysema or other lung diseases, viral infections, sleep apnea, stress, fatigue and age.

In January, the U.S. Food and Drug Administration approved the clinical trial, which is funded by Medtronic and for whom Hummel collaborates with as a consultant and researcher. The current phase of the non-randomized study – which also is taking place in Australia, Canada and Europe – is projected to last six months. It’s looking at how effective the PFA system is for patients with recurrent and symptomatic atrial fibrillation and patients who don’t respond to drug therapy.

“There’s only one site in the country for the pilot phase of this clinical trial, and we’re excited that it’s Ohio State, because we have one of the nation’s largest ablation centers,” Hummel said.

Caption: Dr. John Hummel (left) speaks to Rick Lang before he undergoes a heart ablation to treat his atrial fibrillation at The Ohio State University Wexner Medical Center. Rick was the first patient in the U.S. to receive an ablation using a new device that emits small electrical pulses, which experts hope will make the procedure safer and more effective.