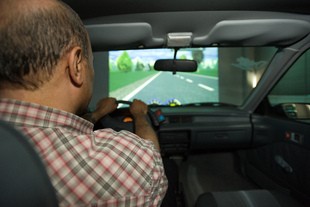 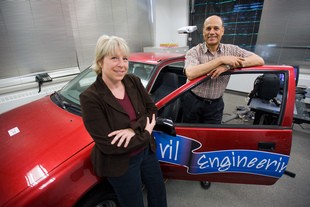 Older drivers tend to be less attentive when driving under brighter road conditions at night, according to a new study by Ryerson University professors Maureen Reed (left) and Said Easa (right).

Newswise — Older drivers tend to be less cautious behind the wheel when roadways are slightly more illuminated, according to a study released today by Ryerson University researchers.

"This finding took us by surprise," says Maureen Reed, a Ryerson psychology professor specializing in vision science and lead author of the study, which was funded by the Ontario Ministry of Transportation.

The ministry approached Reed, Professor Said Easa of Ryerson's Department of Civil Engineering and psychology Professor Frank Russo a year ago to study whether slightly increasing the light intensity on Ontario highways would improve older drivers' performance on roads.

"No one has studied older drivers' driving behaviour and performance at night before in great detail, despite the fact that this is the fastest growing group of drivers in the province," says the study's co-author Easa, who has published numerous papers on road safety. Drivers who are 60 years and older make up 13 per cent of Ontario's licensed drivers.

The researchers surveyed the night-time driving habits of 219 older adults 60 years and older from Ryerson's LIFE Institute, a G. Raymond Chang School of Continuing Education program promoting lifelong learning for seniors. They also tested the visual and cognitive abilities of a second group of 97 adults, ranging from 19 to 84 years, to assess their depth perception and ability to process information among other skills critical to driving safely in dim light. These adults also described their night-time driving experiences. Finally, 75 drivers of that group took a road test in Ryerson's driving simulator lab to test their driving performance: first under light conditions typical of Ontario roads at night, then at a slightly brighter intensity.

Older drivers from the second group were able to see information signs and respond faster during the road simulation test when the highway was more brightly lit. Survey data showed that many seniors often miss signs on roads while driving at night, which causes them problems in finding their way, among other traffic issues.

However, all drivers, including seniors, became less cautious under brighter road conditions. They exceeded the speed limit and drove onto the shoulder of the highway more often. Older adults also were less accurate and precise in following road curves.

Reed suggests that older drivers may pay less attention to their driving under brighter driving conditions. "In the lower light situation, they are slowing down and driving more carefully because they are having difficulty seeing objects and processing what's going on. With the higher light intensity, they felt they didn't need to be as attentive."

The researchers also found that older drivers who rarely drove or avoided driving at night were less accurate and braked faster when they were driving with more light. They were also more cautious and stayed within their lanes more often under low light conditions. Overall, they found that participants who reported they drove less frequently, or avoided driving all together, had the most driving problems at night.

"There has been some research that suggests older adults can drive as well as their younger counterparts because they are regular drivers," says Reed. "It is important for older drivers who avoid driving at night to practice this activity under safe conditions, especially since they rely on their cars to keep their independence and get around."

Easa recommends that lighting should be only increased around highway signs to help older drivers see this information and have time to react more quickly. However, he says the light intensity should remain unchanged in other areas of roads and highways, including areas that require extra caution such as around curves.

Contact Suelan Toye, Public Affairs, to arrange an interview with the researchers or schedule a demonstration of the road test.

To download a video of a demonstration of the road test and researchers discussing the study's findings, go to: http://www.youtube.com/watch?v=nNdfHmSOTUw