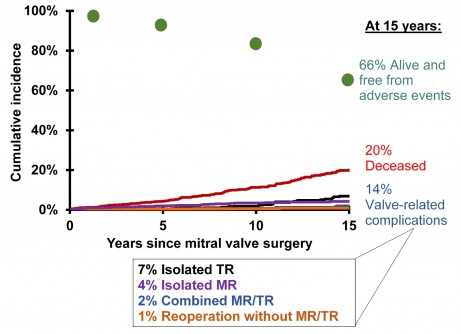 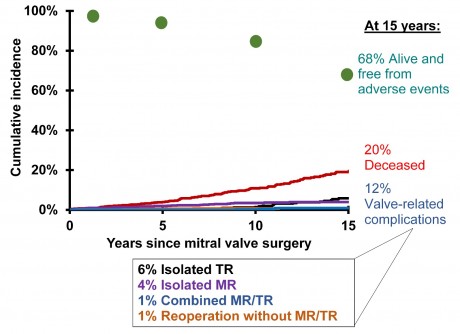 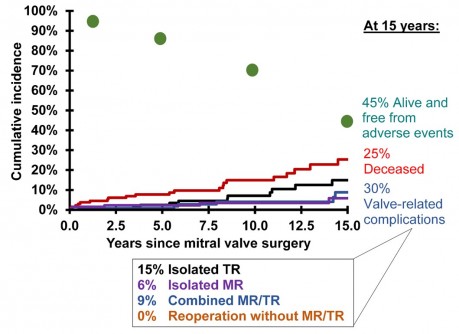 Newswise — Baltimore, MD, May 16, 2016 – Tricuspid regurgitation (TR) occurs when the heart’s tricuspid valve leaks, allowing blood to flow back from the right ventricle to the right atrium. TR can be secondary to disorders of left-sided heart valves (mitral or aortic). At the 96th AATS Annual Meeting, investigators present the results of a long-term study of patients who underwent mitral valve (MV) repair. They found that although newly developed TR after MV repair was rare, the risk could increase in older patients with atrial fibrillation and impaired heart function.

The study included 1,171 patients who had undergone MV repair between 1985 and 2010 with periodic clinical and echocardiographic assessments for around nine years following surgery. Sixty percent of the patients were men and the average age was 58 years. Preoperatively, 44% were classified in New York Heart Association (NYHA) functional classes III and IV (NYHA classes are measures of heart failure). In addition to MV repair, 17.1% of patients also underwent coronary artery bypass, 11.2% had surgical ablation to treat atrial fibrillation (the maze procedure), and 4.7% had tricuspid annuloplasty to surgically repair the tricuspid valve using an annuloplasty ring.

Forty-five patients (3.3%) developed moderate or severe TR, fourteen of whom had undergone previous surgery to repair the tricuspid valve. “Although the number of patients who developed TR after MV repair was small in our study, the effect of severe TR was devastating with a high mortality at one year after the diagnosis, which usually occurred during an episode of heart failure,” commented Dr. David.

The investigators found that two factors were significantly predictive of developing TR: older age and preoperative atrial fibrillation. In fact, preoperative atrial fibrillation was associated with a three-fold increased risk of TR. Other factors that appear to be associated with postoperative moderate-to-severe TR are insertion of a permanent pacemaker and the grade of TR within the first month of MV surgery.

Enlarged size of the ring-shaped tissue surrounding the leaflets of the valve, known as the annulus, is thought to be a risk factor for the development of TR. European guidelines on the management of heart valve diseases recommend ≥40 mm as the size indication for tricuspid annuloplasty. However, in this study all patients who developed TR often had tricuspid annulus diameters less than 40 mm, as well as less than moderate TR by echocardiography at the time of the MV repair.

About 25% of cases of TR are caused by rheumatic disease, endocarditis, carcinoid disease, traumatic injury, or pacemakers/defibrillators. More commonly, TR is caused by left heart disease resulting in pulmonary hypertension, chronic lung disease, pulmonary thromboembolism, or right ventricular dysfunction. The diet drug Fen-Phen was also linked to TR. Symptoms of TR may be difficult to detect but may include weakness and fatigue, active pulsing in the neck veins, reduced urinary output, and swelling in the legs, ankles, feet, or abdomen. Mortality may be attributed to the underlying conditions that cause TR rather than TR itself.

NOTES FOR EDITORS“Tricuspid Regurgitation Is Uncommon after Mitral Valve Repair for Degenerative Disease,” by Tirone E. David, Carolyn M. David, and Cedric Manlhiot. Presentation at the 96th AATS Annual Meeting, May 14-18, 2016, Baltimore, MD, during the Plenary Scientific Session on May 16, 2016, 7:30-7:50 AM ET. http://www.aats.org/annualmeeting

This research was supported by the research institute of Peter Munk Cardiac Centre.

For more information contact Nicole Baritot, Managing Editor, AATS Scientific Publications, at +1 978-299-4520 or press@aats.org. Journalists wishing to interview Dr. David may contact him directly at Tirone.David@uhn.ca. The presentation abstract is located at http://www.aats.org/annualmeeting/Program-Books/2016/1.cgi.

ABOUT THE AMERICAN ASSOCIATION FOR THORACIC SURGERY (AATS)The American Association for Thoracic Surgery (AATS) is an international organization of over 1,300 of the world’s foremost thoracic and cardiothoracic surgeons, representing 41 countries. AATS encourages and stimulates education and investigation into the areas of intrathoracic physiology, pathology and therapy. Founded in 1917 by a respected group of the last century’s earliest pioneers in the field of thoracic surgery, the AATS’ original mission was to “foster the evolution of an interest in surgery of the Thorax.”