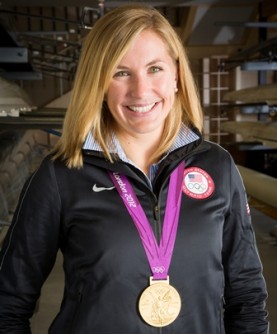 Newswise — Olympic gold medalist Meghan Musnicki has been selected to deliver the main address at Ithaca College’s 2015 Commencement ceremony, scheduled for May 17. A member of the U.S. national rowing team for the past five years, she earned the gold in the women’s eight event at the 2012 Summer Olympics in London.

“Meghan offers our graduating seniors a shining example of the value of hard work, persistence and commitment to the success of a team,” said Tom Rochon, president of Ithaca College. “As someone who walked this campus as a student just 10 years ago, she can offer a message that I am certain will resonate with the class of 2015.”

Musnicki graduated from Ithaca College in 2005 with a degree in psychology. While rowing for the Bombers, she helped lead the squad to back-to-back NCAA Division III championships and was named a first-team all-American. She was inducted into the Ithaca College Athletic Hall of Fame in 2013.

“In addition to training to make the national team for the 2015 World Rowing Championships, I have begun to lay the foundation for my post-rowing life — a personal training and wellness business,” said Musnicki. “I always look forward to returning to South Hill, and it is an honor to be given the opportunity to speak to the class of 2015.”

Following her graduation from Ithaca, Musnicki continued to train while also preparing for nursing school. She was invited to a selection camp for the U.S. national team that would compete at the world championship, and after not being chosen she moved to Boston to train on a fulltime basis. She continued to participate in selection camps, and earned her first spot with the national team in 2010.

This past summer, the U.S. women’s eight won its ninth consecutive gold medal at the 2014 World Rowing Championships in Amsterdam. Musnicki has been part of five of those crews, including one that set a world record at the 2012 Samsung World Rowing Cup. She has also excelled in the pairs event, winning silver and bronze medals in international competition.

“Meghan exemplifies what it means to have a true commitment to excellence, and we are proud to have her deliver the Commencement address to our graduating class,” said Jonathon Cummings, co-president of the Senior Class.

“Having met Meghan when she was inducted into the athletic hall of fame, I have seen first-hand her willingness to share advice and support the IC family,” said fellow co-president Mia O’Brien. “Not only is she a young alumna who can offer tangible, immediate advice to seniors, but through her athletic career and being a second-generation Ithaca College student herself, she truly understands what it means to be a Bomber.”

Musnicki and her family have been an important part of Ithaca’s rowing program. In 2005, the Bombers dedicated the Bill Musnicki III ’75, a racing shell named in honor of her late father. Just weeks after her 2012 Olympics victory, she attended an open house for the college’s newly constructed Ward Romer Boathouse at the Robert B. Tallman Rowing Center on Cayuga Inlet, where she signed autographs and posed for pictures with her gold medal.