Olympic Medal-Winning Luge Sled has Clarkson Technology Behind It 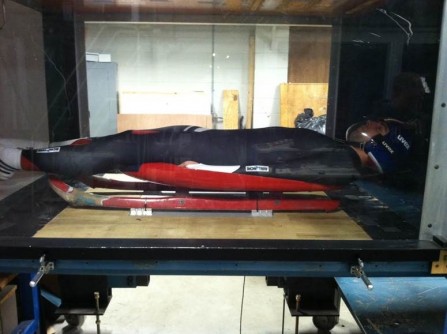 Bohl, along with Paynter-Krigman Endowed Professor in Engineering Science Simulation, Brian Helenbrook, and master’s student Bryan Heckendorf, worked with the United States Luge Association (USLA) to create a portion of the sled Mazdzer rode to his silver-medal finish in Pyeongchang on Sunday.

“We are all very excited to see Chris win his medal. It was nice to know we helped Chris achieve the goals he has worked so hard toward in some way with our work,” said Bohl, who is a slider himself and has served as president of the Adirondack Luge Club. “Chris is a hard-working athlete who has a positive attitude and is great to work with. It was inspiring to watch him have this success and realize his dreams.”

Bohl, Helenbrook, and Heckendorf created a method by which the shell part of the sled could be designed and customized based on a slider.

“That shell was worked on mostly in 2013 and was fabricated in the fall of that year. It was too late to get onto the sleds in Sochi, but U.S. athletes used it the following year and since then,” Bohl said. “Our newer-generation shells were also in the Olympics this year, being used by Shiva Keshavan, the luger from India.”

The group at Clarkson continues to work with Olympian and former slider Duncan Kennedy, developing several more shells for the custom luge sleds he creates.

Clarkson University educates the leaders of the global economy. One in five alumni already leads as an owner, CEO, VP or equivalent senior executive of a company. With its main campus located in Potsdam, N.Y., and additional graduate program and research facilities in the New York Capital Region, Beacon, New York and New York City, Clarkson is a nationally recognized research university with signature areas of academic excellence and research directed toward the world's pressing issues. Through more than 50 rigorous programs of study in engineering, business, arts, education, sciences and the health professions, the entire learning-living community spans boundaries across disciplines, nations, and cultures to build powers of observation, challenge the status quo, and connect discovery and innovation with enterprise.