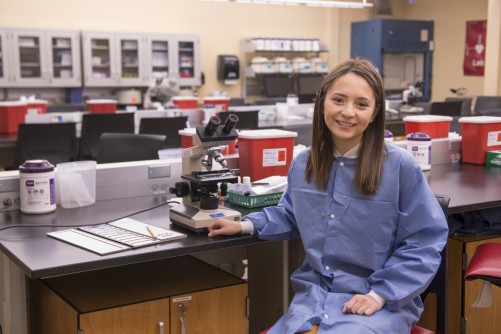 Karina Pizzelanti was inspired to achieve by her mother, who was determined to give her children the education she never had, and by an art teacher, who always set aside time to listen to her.

Newswise — Rutgers School of Health Professions senior Karina Pizzelanti discovered her love for science while living in homeless shelters as a child.

“Without toys as a child, I spent a great deal of time creating my own,” she wrote recently in a scholarship essay.

“I would often sit outside collecting insects to observe, pretending to be a scientist discovering an unfamiliar species of ants from a land far away. Although I have since grown out of my bug collecting years, I have not grown out of my quest for knowledge or endless curiosity.”

In New Jersey, the homeless population on average scores lower than students statewide at every grade level in the three core areas of reading, science and math, with the performance gap the largest in math and science, according to data from the Department of Education.  A national study found that homeless students graduate from high school at a far lower rate than their peers, including students from low-income families.

Until she was about 6, Pizzelanti had a stable life in Bridgewater, an upscale, suburban New Jersey community, attending Adamsville Elementary School. Turmoil in her home led her mother to take her and her brother to Connecticut to live with relatives.

But they soon returned to Bridgewater, where they moved into a women’s shelter. For 18 months, her mother drove Pizzelanti to Adamsville school from various shelters, whose addresses she could never share with anyone – she did not even know them herself.

She recalls wondering why the school nurse only checked on her, offering clothing and canned food, and being summoned often to the guidance counselors’ office.

While she did well academically, she said she developed an intense shyness. “I had trouble making friends because I was so incredibly shy,” she said.

Pizzelanti said she was inspired to achieve by her mother, who was determined to give her children the education she never had, and by an art teacher, who always set aside time to listen to her.

“There was a time where I didn’t think I wanted to go to college because of the financial burden. But because my mom didn’t have a college degree, she always said we needed one. Even if we got jobs that didn’t require a college degree, she said we needed an education. She pushed us in the right direction,” said Pizzelanti, whose younger brother is a student at Ramapo.

A 2014 graduate of Bridgewater-Raritan High School, Pizzelanti applied to five New Jersey colleges and was accepted at all of them. She chose Ramapo, which enrolled her in the Educational Opportunity Fund for disadvantaged students, providing student support and tuition aid, and then entered a joint degree program with Rutgers, in which students complete general ed courses at a partner college and take courses in their major at Rutgers School of Health Professions.

For the year and a half that she taught Pizzelanti, Deborah Josko, Rutgers medical lab science associate professor and program director, had no idea of Pizzelanti’s early struggles – until she reviewed her application for the American Proficiency Institute (API) scholarship program for students in medical lab science programs. API is one of the largest proficiency testing providers in the world, serving over 20,000 laboratories.

“I actually had to read the essay twice,” Josko said. “You would never have known. I felt sad at first but also very impressed and very proud at how far she has come, never letting on that she grew up in difficult circumstances.”

Pizzelanti has seized opportunities to involve herself in extra-curricular activities, participating in a toy drive around the holidays to earn extra credit, helping out at a food pantry and becoming active in professional associations.

When she completes her program in August, Pizzelanti will be a first-generation graduate. She looks forward to a career in research, possibly in the area of public health.

“I am drawn to medical laboratory science because there are new advances in health and medicine each day, yet a vast majority are still unexplained,” she said.

“In this field, there will never be a shortage of questions to ask, ideas to express or knowledge to seek. I chose to become a medical laboratory scientist because at the core of my deep-seated love for science, there is a young explorer waiting.”