One Gene Closer to Regenerative Therapy for Muscular Disorders

Study Identifies Gene that Gets Muscle Cells to Fuse Together 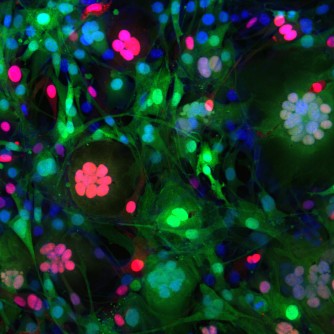 This microscopic image of fibroblast cells shows the induction of cell fusion by a newly described gene and its protein, called myomerger. Multi-nucleus cells expressing genes needed to form skeletal muscle can be seen in flower-like clumps forming as cells fuse together. Reporting results in Nature Communications, the researchers seek ways to develop regenerative therapies for muscle disorders by getting stem cells to fuse and form functioning skeletal muscle tissues.

Newswise — CINCINNATI – A detour on the road to regenerative medicine for people with muscular disorders is figuring out how to coax muscle stem cells to fuse together and form functioning skeletal muscle tissues. A study published June 1 by Nature Communications reports scientists identify a new gene essential to this process, shedding new light on possible new therapeutic strategies.

Led by researchers at the Cincinnati Children’s Hospital Medical Center Heart Institute, the study demonstrates the gene Gm7325 and its protein – which the scientists named “myomerger” – prompt muscle stem cells to fuse and develop skeletal muscles the body needs to move and survive. They also show that myomerger works with another gene, Tmem8c, and its associated protein “myomaker” to fuse cells that normally would not.

In laboratory tests on embryonic mice engineered to not express myomerger in skeletal muscle, the animals did not develop enough muscle fiber to live.

"These findings stimulate new avenues for cell therapy approaches for regenerative medicine,” said Douglas Millay, PhD, study senior investigator and a scientist in the Division of Molecular Cardiovascular Biology at Cincinnati Children’s. “This includes the potential for cells expressing myomaker and myomerger to be loaded with therapeutic material and then fused to diseased tissue. An example would be muscular dystrophy, which is a devastating genetic muscle disease. The fusion technology possibly could be harnessed to provide muscle cells with a normal copy of the missing gene.”

One of the molecular mysteries hindering development of regenerative therapy for muscles is uncovering the precise genetic and molecular processes that cause skeletal muscle stem cells (called myoblasts) to fuse and form the striated muscle fibers that allow movement. Millay and his colleagues are identifying, deconstructing and analyzing these processes to search for new therapeutic clues.

Genetic degenerative disorders of the muscle number in the dozens, but are rare in the overall population, according to the National Institutes of Health. The major categories of these devastating wasting diseases include: muscular dystrophy, congenital myopathy and metabolic myopathy. Muscular dystrophies are a group of more than 30 genetic diseases characterized by progressive weakness and degeneration of the skeletal muscles that control movement. The most common form is Duchenne MD.

A previous study authored by Millay in 2014 identified myomaker and its gene through bioinformatic analysis. Myomaker is also required for myoblast stem cells to fuse.  However, it was clear from that work that myomaker did not work alone and needed a partner to drive the fusion process. The current study indicates that myomerger is the missing link for fusion, and that both genes are absolutely required for fusion to occur, according to the researchers.

To find additional genes that regulate fusion, Millay’s team screened for those activated by expression of a protein called MyoD, which is the primary initiator of the all the genes that make muscle. The team focused on the top 100 genes induced by MyoD (including GM7325/myomerger) and designed a screen to test the factors that could function within and across cell membranes. They also looked for genes not previously studied for having a role in fusing muscle stem cells. These analyses eventually pointed to a previously uncharacterized gene listed in the database - Gm7325.

Researchers then tested cell cultures and mouse models by using a gene editing process called CRISPR-Cas9 to demonstrate how the presence or absence of myomaker and myomerger – both individually and in unison – affect cell fusion and muscle formation. These tests indicate that myomerger-deficient muscle cells called myocytes differentiate and form the contractile unit of muscle (sarcomeres), but they do not join together to form fully functioning muscle tissue.

The researchers are building on their current findings, which they say establishes a system for reconstituting cell fusion in mammalian cells, a feat not yet achieved by biomedical science.

For example, beyond the cell fusion effects of myomaker and myomerger, it isn’t known how myomaker or myomerger induce cell membrane fusion. Knowing these details would be crucial to developing potential therapeutic strategies in the future, according to Millay. This study identifies myomerger as a fundmentally required protein for muscle development using cell culture and laboratory mouse models.

The authors emphasize that extensive additional research will be required to determine if these results can be translated to a clinical setting.