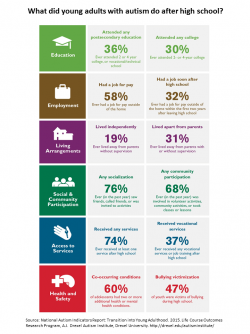 At a glance: What did young adults with autism do after high school?

Newswise — PHILADELPHIA (April 21, 2015) – Autism does not end when children reach adulthood—yet most public awareness, public policy and research about autism focus on the needs of children. Families, service providers, community leaders and policymakers still know too little about the experiences and outcomes of young people on the autism spectrum as they enter their adult lives. What are their experiences with transition planning, living arrangements, social participation, employment, postsecondary education, health and mental health, safety and other domains?

Answers to these and other critical questions, addressing life outcomes beyond clinical interventions, are the focus of a report issued today from Drexel University’s A.J. Drexel Autism Institute, from its Life Course Outcomes Research Program. The “National Autism Indicators Report: Transition into Young Adulthood” is a comprehensive report (available free online) that presents new findings about a wide range of experiences and outcomes of youth on the autism spectrum between high school and their early 20s, including new safety and risk indicators for young adults with autism. The report describes the indicators now available and serves as a call to action to fill the remaining large gaps in knowledge.

“When it comes to understanding how well our nation is helping youth affected by autism, our situation is like driving a car through the fog with no dashboard,” said Paul Shattuck, PhD, leader of the Life Course Outcomes Research Program and an associate professor at Drexel. “We know we’re moving, but we do not have many indicators to tell us how fast we are going, whether we’re getting close to our goals, or what kind of mileage we are getting from the resources fueling our trip.”The report is a collection of indicators that focuses national attention on outcomes which are almost universally lower for those on the autism spectrum compared to their peers with other types of disabilities.

“While the picture looks bleak, we found that some of those who have the most significant levels of challenges do go on to find jobs and attend further education,” said Shattuck. “A critical next step is to figure out what facilitates connections to outcomes and what helps people to continue to succeed across their early adult years.”

National-level data included in the report come from the National Longitudinal Transition Study -2 (NLTS2) and the Survey of Pathways to Diagnosis and Services. The report also includes self-reports from a portion of adults with autism who were able to respond to the surveys.

The A.J. Drexel Autism Institute is the first research organization built around a public health science approach to understanding and addressing the challenges of autism spectrum disorders across the lifespan. Its Life Course Outcomes (LCO) Research Program envisions a future where people on the autism spectrum are valued as contributing members of our communities who have roles to play and dreams to pursue. The LCO Research Program is building a base of knowledge about the things other than clinical interventions that promote positive outcomes for people on the autism spectrum and their families and communities. The Indicators Initiative is one of its four major areas of research focus.

###Reporters: To access an advance copy of the report under embargo prior to 9 am EDT on April 21, contact Rachel Ewing, [email protected].