One Injection Stops Diabetes in Its Tracks

Treatment reverses symptoms of type 2 diabetes in mice without side effects. 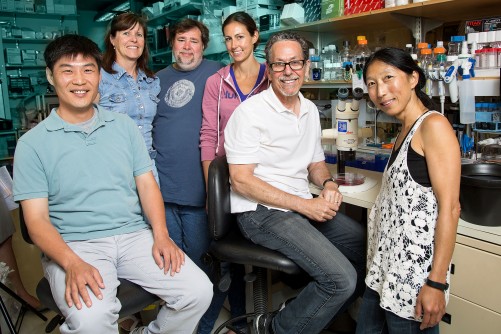 In this analogy, too much sugar in the bloodstream is equivalent to a car in the danger zone. In type 2 diabetes (commonly associated with obesity) the body cannot use sugar properly, leading to serious health problems. The growth factor FGF1 has been shown to decrease the amount of blood sugar in diabetic mice, bringing glucose levels back to normal.

Newswise — LA JOLLA—In mice with diet-induced diabetes—the equivalent of type 2 diabetes in humans—a single injection of the protein FGF1 is enough to restore blood sugar levels to a healthy range for more than two days. The discovery by Salk scientists, published today in the journal Nature, could lead to a new generation of safer, more effective diabetes drugs.

The team found that sustained treatment with the protein doesn’t merely keep blood sugar under control, but also reverses insulin insensitivity, the underlying physiological cause of diabetes. Equally exciting, the newly developed treatment doesn’t result in side effects common to most current diabetes treatments.

“Controlling glucose is a dominant problem in our society,” says Ronald M. Evans, director of Salk's Gene Expression Laboratory and corresponding author of the paper. “And FGF1 offers a new method to control glucose in a powerful and unexpected way.”

Type 2 diabetes, which can be brought on by excess weight and inactivity, has skyrocketed over the past few decades in the United States and around the world. Almost 30 million Americans are estimated to have the disease, where glucose builds up in the bloodstream because not enough sugar-carting insulin is produced or because cells have become insulin-resistant, ignoring signals to absorb sugar. As a chronic disease, diabetes can cause serious health problems and has no specific cure. Rather it is managed—with varying levels of success—through a combination of diet, exercise and pharmaceuticals.

Diabetes drugs currently on the market aim to boost insulin levels and reverse insulin resistance by changing expression levels of genes to lower glucose levels in the blood. But drugs, such as Byetta, which increase the body’s production of insulin, can cause glucose levels to dip too low and lead to life-threatening hypoglycemia, as well as other side effects.

In 2012, Evans and his colleagues discovered that a long-ignored growth factor had a hidden function: it helps the body respond to insulin. Unexpectedly, mice lacking the growth factor, called FGF1, quickly develop diabetes when placed on a high-fat diet, a finding suggesting that FGF1 played a key role in managing blood glucose levels. This led the researchers to wonder whether providing extra FGF1 to diabetic mice could affect symptoms of the disease.

Evans’ team injected doses of FGF1 into obese mice with diabetes to assess the protein’s potential impact on metabolism. Researchers were stunned by what happened: they found that with a single dose, blood sugar levels quickly dropped to normal levels in all the diabetic mice.

“Many previous studies that injected FGF1 showed no effect on healthy mice,” says Michael Downes, a senior staff scientist and co-corresponding author of the new work. “However, when we injected it into a diabetic mouse, we saw a dramatic improvement in glucose.”

The researchers found that the FGF1 treatment had a number of advantages over the diabetes drug Actos, which is associated with side effects ranging from unwanted weight gain to dangerous heart and liver problems. Importantly, FGF1—even at high doses—did not trigger these side effects or cause glucose levels to drop to dangerously low levels, a risk factor associated with many glucose-lowering agents. Instead, the injections restored the body’s own ability to naturally regulate insulin and blood sugar levels, keeping glucose amounts within a safe range—effectively reversing the core symptoms of diabetes.

“With FGF1, we really haven’t seen hypoglycemia or other common side effects,” says Salk postdoctoral research fellow Jae Myoung Suh, a member of Evans’ lab and first author of the new paper. “It may be that FGF1 leads to a more ‘normal’ type of response compared to other drugs because it metabolizes quickly in the body and targets certain cell types.”

The mechanism of FGF1 still isn’t fully understood—nor is the mechanism of insulin resistance—but Evans’ group discovered that the protein’s ability to stimulate growth is independent of its effect on glucose, bringing the protein a step closer to therapeutic use.

“There are many questions that emerge from this work and the avenues for investigating FGF1 in diabetes and metabolism are now wide open,” Evans says. Pinning down the signaling pathways and receptors that FGF1 interacts with is one of the first questions he’d like to address. He’s also planning human trials of FGF1 with collaborators, but it will take time to fine-tune the protein into a therapeutic drug.

“We want to move this to people by developing a new generation of FGF1 variants that solely affect glucose and not cell growth,” he says. “If we can find the perfect variation, I think we will have on our hands a very new, very effective tool for glucose control.”

Other researchers on the study were Maryam Ahmadian, Eiji Yoshihara, Weiwei Fan, Yun-Qiang Yin, Ruth T. Yu, and Annette R. Atkins of the Salk Institute for Biological Studies; Weilin Liu, Johan W. Jonker, Theo van Dijk, and Rick Havinga of the University of Groningen; Christopher Liddle of the University of Sydney; Denise Lackey, Olivia Osborn, and Jerrold M. Olefsky of the University of California at San Diego; and Regina Goetz, Zhifeng Huang, and Moosa Mohammadi of the New York University School of Medicine.

About the Salk Institute for Biological Studies:The Salk Institute for Biological Studies is one of the world's preeminent basic research institutions, where internationally renowned faculty probes fundamental life science questions in a unique, collaborative and creative environment. Focused both on discovery and on mentoring future generations of researchers, Salk scientists make groundbreaking contributions to our understanding of cancer, aging, Alzheimer's, diabetes and infectious diseases by studying neuroscience, genetics, cell and plant biology, and related disciplines. 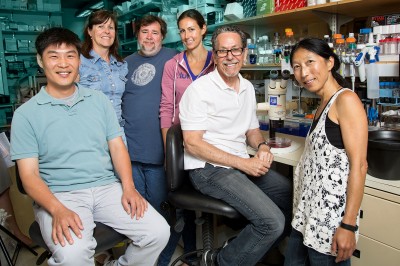 Caption: In this analogy, too much sugar in the bloodstream is equivalent to a car in the danger zone. In type 2 diabetes (commonly associated with obesity) the body cannot use sugar properly, leading to serious health problems. The growth factor FGF1 has been shown to decrease the amount of blood sugar in diabetic mice, bringing glucose levels back to normal.