One Million Mosquitoes and 500,000 Tests Later, New Buzz about a Malaria Prevention Drug

Researchers tested chemical compounds for their ability to inhibit the malaria parasite at an earlier lifecycle stage than most current drugs, revealing chemical starting points for new malaria preventatives 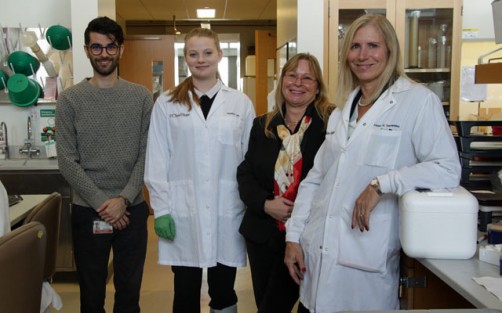 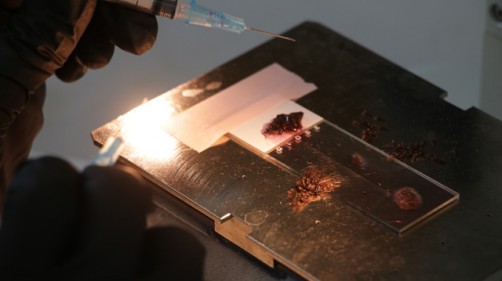 Extracting sporozoites of the malaria parasite from mosquitoes in Elizabeth Winzeler’s lab at UC San Diego School of Medicine.

Newswise — Most malaria drugs are designed to reduce symptoms after infection. They work by blocking replication of the disease-causing parasites in human blood, but they don’t prevent infection or transmission via mosquitoes. What’s worse, the malaria parasite is developing resistance to existing drugs.

“In many ways, the search for new malaria drugs has been a search for something akin to aspirin — it makes you feel better but doesn’t necessarily go after the root of problem,” said Elizabeth Winzeler, PhD, professor of pharmacology and drug discovery at University of California San Diego School of Medicine.

In a study published December 7 in Science, Winzeler and her team took a different approach: targeting the malaria parasite at an earlier stage in its lifecycle, when it initially infects the human liver, rather than waiting until the parasite is replicating in blood and making a person ill.

The team spent two years extracting malaria parasites from hundreds of thousands of mosquitoes and using robotic technology to systematically test more than 500,000 chemical compounds for their ability to shut down the malaria parasite at the liver stage. After further testing, they narrowed the list to 631 promising compounds that could form the basis for new malaria prevention drugs.

To help speed this effort, the researchers made the findings open source, meaning the data are freely shared with the scientific community.

“It’s our hope that, since we’re not patenting these compounds, many other researchers around the world will take this information and use it in their own labs and countries to drive antimalarial drug development forward,” Winzeler said.

Most cases of malaria are caused by the mosquito-borne parasites Plasmodium falciparum or Plasmodium vivax. The parasites’ lifecycle begins when an infected mosquito transmits sporozoites into a person while taking a blood meal. A few of these sporozoites may establish an infection in the liver. After replicating there, the parasites burst out and infect red blood cells. That’s when the person begins to experience malarial symptoms, such as fever, chills and headaches. That’s also when the parasite can be sucked up by a new mosquito and transmitted to another person.

For safety’s sake, Winzeler and team used a related parasite called Plasmodium berghei in the study, which can only infect mice. Their collaborators in New York infected mosquitos with these parasites and every Tuesday, Winzeler’s team would receive a big orange box of mosquitoes by FedEx. On Tuesday afternoons, they would extract the sporozoites, transfer them to plates containing 1,536 tiny divots, or wells, and then carry the plates over to the drug screening facilities at Skaggs School of Pharmacy and Pharmaceutical Sciences at UC San Diego or across the street to the Genomics Institute of the Novartis Research Foundation.

“In a good week, we’d be able to test 20,000 compounds,” Winzeler said, “but of course many of the mosquitoes we received would be dried out, frozen or covered in fungus.”

These sporozoites were engineered to produce luciferase, the same enzyme that fireflies use to produce their telltale glow. Then, in the drug screening facilities, researchers used robotic technology and sound waves to add minute amounts of each chemical compound, one compound per sporozoite-containing well.

The researchers looked for the compounds that switch the glow “off,” meaning they had killed the parasites or blocked their ability to replicate. They took those compounds, confirmed their potency and weeded out the ones toxic to liver cells. They also tested the compounds for their ability to inhibit or kill other Plasmodium species and parasites at other lifecycle stages.

That left them with 631 promising chemical compounds — chemical starting points for the development of new drugs to block a malaria infection before symptoms begin, and prevent their transmission to the blood, mosquitoes and other people. Winzeler said she was surprised to find that many compounds (58) block the parasite’s electron transport chain, an energy-generating process in its mitochondria.

The team will next take a closer look at the 631 promising drug candidates to determine how many work against the liver stage of the Plasmodium species that affect humans. Winzeler and members of the Bill and Melinda Gates Foundation Malaria Drug Accelerator (MalDA), an international consortium focused on speeding drug development, are collaborating to unravel the mechanism by which many of the compounds work against the malaria parasite.

The team and others will also continue the work necessary to develop the compounds into drugs that are safe for human consumption and effective at preventing liver-stage parasites from replicating and bursting out into the bloodstream. The ideal new drug would also be affordable and practical for administration in parts of the world without refrigeration or an abundance of health care providers.

“It’s difficult for many people to consistently sleep under mosquito nets or take a daily pill,” Winzeler said. “We’ve developed many other options for things like birth control. Why not malaria? The malaria research community has always been particularly collaborative and willing to share data and resources, and that makes me optimistic that we’ll soon get there too.”

According to a new report from the World Health Organization (WHO), malaria cases are on the rise, particularly in 13 countries, including Madagascar, Nigeria and the Democratic Republic of the Congo. There were 219 million cases of malaria in 2017, compared to 217 million the previous year. In 2017, approximately 435,000 people died of malaria.

Disclosure: Winzeler received travel reimbursement from the Medicines for Malaria Venture and the Bill and Melinda Gates Foundation. 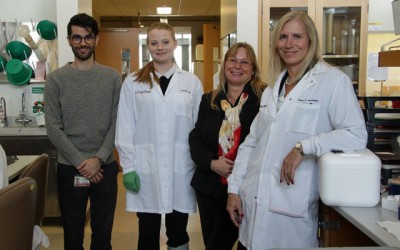 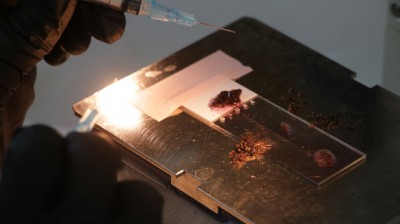 Caption: Extracting sporozoites of the malaria parasite from mosquitoes in Elizabeth Winzeler’s lab at UC San Diego School of Medicine.