The OpenSidewalks project promotes equity in pedestrian routes by making sidewalks first-class members of an open data transportation network. Collecting open sidewalk information will support a variety of use cases and downstream activities, including addressing the informational gap for pedestrians of all abilities, automated trip planning customized to individual abilities, and furnishing rich analytic tools for data-driven urban planning. Access to safe pedestrian routes is a critical challenge if we are to steward healthy, inclusive, and resilient cities around the globe. OpenSidewalks is an initiative of the Taskar Center for Accessible Technology in partnership with [email protected] & FeetFirst, cosponsored by eScience Institute at the University of Washington. 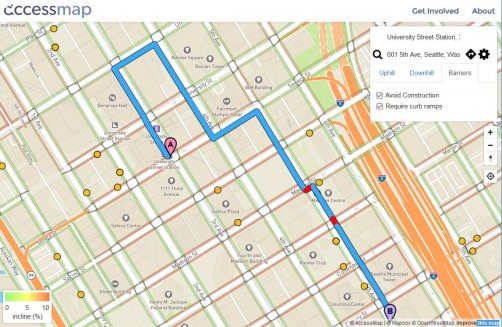 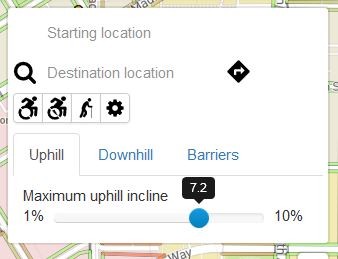 Users can customize AccessMap to avoid construction zones, intersections without curb cuts and hills of a certain grade.

For someone with limited mobility, using sidewalks or pedestrian paths in an unfamiliar area can be like driving without directions and hitting dead end after dead end.

Obstacles include hills that are too steep for wheelchairs or people with certain health issues to climb and sidewalks without sloped “curb cuts” that allow people using wheeled devices to safely and easily cross intersections.

On Wednesday AccessMap – a University of Washington project spearheaded by the Taskar Center for Accessible Technology — launched a new online travel planner offering customizable suggestions for people who need accessible or pedestrian-friendly routes when getting from point A to B in Seattle. It will also route people around Seattle’s ubiquitous building and construction sites that can close sidewalks for entire blocks, forcing people who are traveling on foot or using assistive devices to embark on unforeseen detours. The research team will present the project Feb. 1 at the Global City Teams Challenge summit in Portland, Oregon.

The team of student engineers and computer scientists, through its OpenSidewalks project, is also creating a set of standards and toolkits that will eventually let users in Seattle and other communities crowdsource and map detailed, real-world conditions on pedestrian pathways and intersections — from sidewalk widths and problematic surface conditions to the presence of ramps, handrails and adequate lighting.

“The big highlight now is our ability to offer automated routing and accessible travel planning for Seattle residents who may have mobility challenges or may simply want to find the easiest way to navigate a neighborhood with a toddler on a tricycle,” said Taskar Center director Anat Caspi.

“Identifying routes that optimize not for time or distance but for things like changes in elevation and curb cuts is a really big and important change.”

Information that allows for safe, accessible travel planning on pedestrian pathways previously did not exist in one place or in a user-friendly format. While it is particularly useful for people with disabilities, information about elevation and curb ramps can also help delivery drivers who push hand trucks, people on crutches or knee scooters, travelers hauling luggage to a light rail stop or children learning to bike or roller skate.

The AccessMap team won a City of Seattle Hack the Commute competition in 2015 and subsequently participated the Data Science for Social Good summer program sponsored by the eScience Institute, [email protected] and Microsoft. They compiled and cleaned up disparate data from local and federal sources on street elevation, curb cuts and other accessibility features to create a zoom able map of Seattle’s sidewalks and pedestrian paths. People could consult that online map to pick more accessible or pedestrian-friendly routes on their own. Now, AccessMap allows someone to type in a starting and ending destination in Seattle and receive automated route suggestions. Users can customize their preferences to avoid hills of a certain grade or navigate around construction sites.

For example, the pedestrian directions from University Street Station on Second Avenue to Seattle City Hall on Fifth Avenue on Google Maps route people up Seneca Street, which has a steep 10 percent grade that’s problematic for people in wheelchairs or with certain injuries or health conditions. By contrast, AccessMap sends people two blocks north to Pike Street, which has a much gentler grade of less than 2 percent.

The research team has recently expanded its focus to create new pedestrian standards for OpenStreetMap, a crowdsourced global mapping effort that relies on volunteers to create detailed, up-to-date maps of street conditions. The team is working to create easy-to-use editing tools that will allow people anywhere to enter detailed information about sidewalks, paved trails and other pedestrian paths.

“We hope to be able to crowdsource all kinds of information that relates to accessibility: where a sidewalk may be cracked or buckled because of a tree root, other obstacles, inclines, lighting, how smooth the surface is, whether there’s tactile paving,” said Nick Bolten, a UW electrical engineering doctoral student and project technical lead for AccessMap and OpenSidewalks. “Our goal is to have a set of toolkits and instructions so other municipalities and local communities can get their own mapping efforts up and running.”

The OpenSidewalks project is also partnering with the Seattle Public Schools and the City of Seattle on the Safe Route to Schools initiative, which aims to increase the number of kids walking and biking to school. They hope to introduce materials and app-based toolkits this fall that will allow students to gather and upload information about the quality and safety of sidewalks and intersections around their schools.

“We want to teach and promote little citizen scientists to survey a one-mile radius of their school communities in more detail than someone sitting on a couch and looking at aerial maps could,” said Caspi. “Then they can upload the information to a permanent and publicly accessible site, where it can be used to guide investments that will benefit all types of sidewalk users.”

Projects have been funded by the Taskar Center for Accessible Technology at the UW Department of Computer Science & Engineering, eScience Institute, [email protected], the Ford Blue Oval Network, UW Vertically Integrated Projects and the Seattle Department of Transportation Hack the Commute Hackathon.