Opioid Abuse and Overdose: How Toxicologists Are Addressing This Public Health Crisis 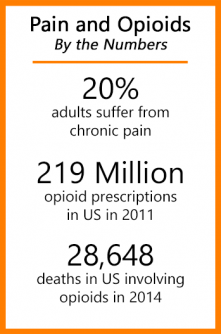 Newswise — On a global level, it is estimated that 20% of adults suffer from pain, and 10% are being newly diagnosed with chronic pain each year (Goldberg and McGee 2011). The presence of chronic pain afflicts about 100 million people in America, and five to eight million Americans routinely use opioids for the management of their long-term pain (American Academy of Pain Medicine 2017). The number of opioid prescriptions in the US for pain has increased from 76 million in 1991 to 219 million in 2011 (Sifferlin 2015).

The prevalence of chronic pain among the general population and the increased use of opioids has led to a growing epidemic of opioid abuse. The increased abuse of opioids in the United States has been in the spotlight as a result of numerous cases of and reports on the negative impacts individuals suffering from opioid addiction and their families have endured, including overdoses and deaths. These incidents are affecting a variety of people from different walks of life, and opioid abuse is becoming an increasing cause of death in the United States. Data released by the US Center for Disease Control and Prevention (CDC) reveals that opioids were involved in 28,648 deaths in 2014, which was more than the number of deaths attributed to motor vehicle crashes (Botticelli 2016).

In an effort to address this growing issue, a variety of professionals are making their own specialized contribution to try to curtail opioid abuse. Toxicologists are in a unique position to offer their expertise (i.e., keen knowledge of drug mechanism and impact on the human body) to help improve the science regarding opioids. For instance, toxicologists can provide physicians and regulators with valuable information regarding when opioids are best to manage chronic pain and ways to minimize the development of addiction. Furthermore, toxicologists can work with key members of the prescribing community to educate them on the advantages and disadvantages of opioids, including the best approach for using opioids and recognizing when patients are candidates for use. As a result of the prolonged nature of chronic pain, some opioids are being prescribed over an extended period of time, which can prove to be detrimental to patients when it comes to the potential for abuse (US Food and Drug Administration [US FDA] 2013). Helping educate prescribers on how to explain the mechanism of opioids to the lay person and how to appropriately use these powerful drugs is a key role toxicologists can play (US FDA 2013).

Moving forward, a change must occur in the way opioids are seen not only by the medical community, but also the general public—and toxicologists can be integral in changing this perception for the better. For example, when it comes to the initiation of opioids in any patient, toxicologists can be involved in the risk-benefit assessment and evaluate if the potential for abuse may exist.

Author Bio: Abimbola Farinde, PharmD, PhD, is a postdoctoral member of SOT. She currently is an adjunct faculty member in the College of Nursing and Health Care Professionals at Grand Canyon University.

US Food and Drug Administration (US FDA). 2013. “FDA’s Efforts to Address the Misuse and Abuse of Opioids.” Last modified April 9, 2014. Accessed January 25, 2017. https://www.fda.gov/Drugs/DrugSafety/InformationbyDrugClass/ucm337852.htm