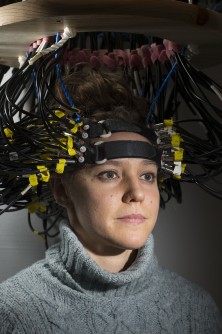 Newswise — Scientists have advanced a brain-scanning technology that tracks what the brain is doing by shining dozens of tiny LED lights on the head. This new generation of neuroimaging compares favorably to other approaches but avoids the radiation exposure and bulky magnets the others require, according to new research at Washington University School of Medicine in St. Louis.

The new optical approach to brain scanning is ideally suited for children and for patients with electronic implants, such as pacemakers, cochlear implants and deep brain stimulators (used to treat Parkinson’s disease). The magnetic fields in magnetic resonance imaging (MRI) often disrupt either the function or safety of implanted electrical devices, whereas there is no interference with the optical technique.

The new technology is called diffuse optical tomography (DOT). While researchers have been developing it for more than 10 years, the method had been limited to small regions of the brain. The new DOT instrument covers two-thirds of the head and for the first time can image brain processes taking place in multiple regions and brain networks such as those involved in language processing and self-reflection (daydreaming).

The results are now available online in Nature Photonics.

“When the neuronal activity of a region in the brain increases, highly oxygenated blood flows to the parts of the brain doing more work, and we can detect that,” said senior author Joseph Culver, PhD, associate professor of radiology. “It’s roughly akin to spotting the rush of blood to someone’s cheeks when they blush.”

The technique works by detecting light transmitted through the head and capturing the dynamic changes in color of the brain tissue.

Although DOT technology now is used in research settings, it has the potential to be helpful in many medical scenarios as a surrogate for functional MRI, the most commonly used imaging method for mapping human brain function. Functional MRI also tracks activity in the brain via changes in blood flow. In addition to greatly adding to our understanding of the human brain, fMRI is used to diagnose and monitor brain disease and therapy.

Another commonly used method for mapping brain function is positron emission tomography (PET), which involves radiation exposure. Because DOT technology does not use radiation, multiple scans performed over time could be used to monitor the progress of patients treated for brain injuries, developmental disorders such as autism, neurodegenerative disorders such as Parkinson’s, and other diseases.

Unlike fMRI and PET, DOT technology is designed to be portable, so it could be used at a patient’s beside or in the operating room.

“With the new improvements in image quality, DOT is moving significantly closer to the resolution and positional accuracy of fMRI,” said first author Adam T. Eggebrecht, PhD, a postdoctoral research fellow. “That means DOT can be used as a stronger surrogate in situations where fMRI cannot be used.”

The researchers have many ideas for applying DOT, including learning more about how deep brain stimulation helps Parkinson’s patients, imaging the brain during social interactions, and studying what happens to the brain during general anesthesia and when the heart is temporarily stopped during cardiac surgery.

For the current study, the researchers validated the performance of DOT by comparing its results to fMRI scans. Data was collected using the same subjects, and the DOT and fMRI images were aligned. They looked for Broca’s area, a key area of the frontal lobe used for language and speech production. The overlap between the brain region identified as Broca’s area by DOT data and by fMRI scans was about 75 percent.

In a second set of tests, researchers used DOT and fMRI to detect brain networks that are active when subjects are resting or daydreaming. Researchers’ interests in these networks have grown enormously over the past decade as the networks have been tied to many different aspects of brain health and sickness, such as schizophrenia, autism and Alzheimer’s disease. In these studies, the DOT data also showed remarkable similarity to fMRI — picking out the same cluster of three regions in both hemispheres.

“With the improved image quality of the new DOT system, we are getting much closer to the accuracy of fMRI,” Culver said. “We’ve achieved a level of detail that, going forward, could make optical neuroimaging much more useful in research and the clinic.”

While DOT doesn’t let scientists peer very deeply into the brain, researchers can get reliable data to a depth of about one centimeter of tissue. That centimeter contains some of the brain’s most important and interesting areas with many higher brain functions, such as memory, language and self-awareness represented.

During DOT scans, the subject wears a cap composed of many light sources and sensors connected to cables. The full-scale DOT unit takes up an area slightly larger than an old-fashioned phone booth, but Culver and his colleagues have built versions of the scanner mounted on wheeled carts. They continue to work to make the technology more portable.

Research participants Britt Gott (left) and Sridhar Kandala demonstrate the ability to interact while being scanned via diffuse optical tomography. Patients in MRI scanners don’t have the same freedom to move and interact.

Culver and Washington University have financial interests in Cephalogics LLC based on a license of related optical imaging technology by the university to Cephalogics LLC. They are regulated in accordance with the university’s conflict-of-interest policies.###The research is funded by the National Institutes of Health (NIH) grants R01-EB009233, R01-NS078223, T32-NS007205-30 and P30-NS048056; an Autism Speaks Postdoctoral Translational Research Fellowship; a Fulbright Science and Technology PhD Award; and a McDonnell Centre for Systems Neuroscience grant.