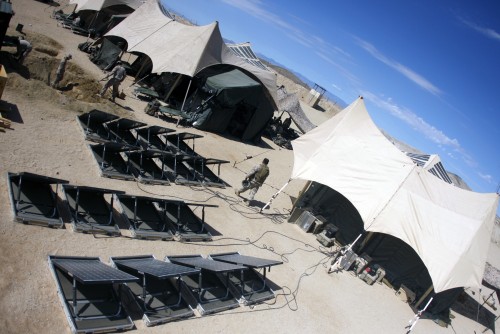 The U.S. Marine Corps is evaluating the use of alternative energy sources to provide power for its operations. This image shows an evaluation of photovoltaic panels in 2010. 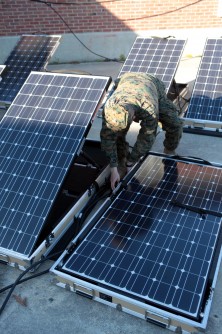 The U.S. Marine Corps is evaluating the use of alternative energy sources to provide power for its operations. This photograph shows a photovoltaic panel being stored for transportation. 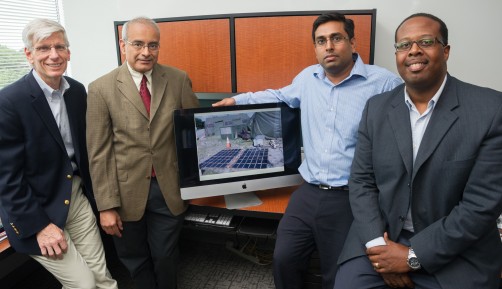 Georgia Tech researchers have begun a project to develop information that military resource planners can use to optimize energy consumption depending on mission needs and local conditions. Shown (l-r) are researchers Paul Kohl, Yogendra Joshi, Satish Kumar and Sam Graham.

Newswise — Delivering liquid fuel to energy-hungry forward operating bases can be both costly to the U.S. military and risky to those who transport the fuel. For those reasons, the U.S. Department of Defense (DoD) wants to reduce liquid fuel consumption at these bases, by expanding the use of alternative energy sources and by improving energy efficiency.

A $2.9 million cooperative agreement with the Georgia Institute of Technology will advance that goal by developing information that military resource planners can use to optimize energy consumption depending on mission needs and local conditions. By developing, evaluating and integrating dynamic modeling and simulation tools for this task, the researchers will help the DoD meet energy needs while reducing liquid fuel consumption and logistics support.

The four-year project is part of the Consortium for Optimally Resource-Secure Outposts (CORSO), a first-of-its-kind research consortium involving academia, industry and government laboratories.

“Our role is to develop physics-based simulation approaches for a number of promising technologies that support heating, ventilation and air conditioning needs at these forward operating bases,” said Yogendra Joshi, a professor in Georgia Tech’s Woodruff School of Mechanical Engineering and the project’s principal investigator. “These applications are the largest non-propulsion consumers of liquid fuels, though we will also look at other uses of energy.”

Supported by the DoD’s Operational Energy Capabilities Improvement Fund through the Office of Naval Research (ONR), the project will also involve researchers at the National Renewable Energy Laboratory (NREL), Oak Ridge National Laboratory (ORNL), DoD laboratories, and a number of companies that are producing energy-related technologies. The consortium won’t be developing new hardware, but will instead focus on how best to integrate existing technologies – including renewables where they meet other mission criteria.

“Better energy options make our forces more flexible and adaptive in combat,” said Sharon E. Burke, Assistant Secretary of Defense for Operational Energy Plans and Programs. “Tapping academia and the national labs will give us access to a greater range of expertise in this dynamic area.”

Forward operating bases are typically located in remote areas far from reliable power grids. To carry out military missions and support the personnel there, U.S. Marines in Afghanistan consume 200,000 gallons of fuel per day, Sea Power Magazine recently reported. Air conditioning in the summer months can consume as much as 60 percent of a base’s fuel.

The consortium will focus a broad range of expertise on addressing these energy needs.

“This is a unique collaboration between the Department of Defense and the Georgia Institute of Technology to develop modeling approaches to enhance the operational effectiveness and resource security of expeditionary outposts by reducing battlefield fuel consumption,” said Mark S. Spector, program officer in the Ship Systems and Engineering Division of the Office of Naval Research (ONR). “A key aspect of the Georgia Tech consortium will be their engagement with innovators who have not previously worked directly with the government. This effort is a critical piece of a larger effort led by the Office of Naval Research in partnership with the Department of Energy’s Office of Energy Efficiency & Renewable Energy to determine the optimal balance of energy resources in an operational environment.”

In optimizing the energy use, the researchers will have to take into account unique aspects of the forward operating bases. Wind turbines, for example, might be attractive from an energy perspective in certain locations, but could attract unwanted attention. Highly efficient HVAC systems use less energy, but might be more difficult to transport because of their weight.

“The key issue is that these bases are off-grid, so you have to be able to store energy and supply it when needed,” Joshi noted. “There is a lot of good work going on in terms of technologies that are already in the commercial world that might be useful in these unique conditions.”

At Georgia Tech, the research team will include four faculty members from the College of Engineering. In addition to Joshi, who specializes in energy efficiency, they include:

Among the technologies that will be studied are ground-coupled heat pumps. These devices take advantage of relatively constant subsurface temperatures to provide heating and cooling. Because they take advantage of natural differences between surface and subsurface conditions, they can be more efficient than the liquid-fueled HVAC systems the military has used.

Beyond academic and national lab resources, the consortium will identify and collaborate with companies that are developing energy technologies that may help the DoD reach its goals. In particular, the consortium is seeking innovative ideas from small businesses and non-traditional defense contractors.

“We will find companies that have really compelling technologies for these outposts and we will then be able to provide test data on their technologies,” Joshi explained. “The companies will also help with validating the models we develop.”

The project will also include an educational component to share energy optimization information with DoD planners and engineers through curriculum being developed by the Naval Postgraduate School. Technology transfer could also use short-term MOOCs, which would reduce the need for DoD personnel to travel to centralized classes.

While the primary goal will be improved support for military bases, the project could also benefit large-scale humanitarian relief missions, which also must operate without grid electricity. Ultimately, reducing the energy required to operate remote bases could impact the way future missions are carried out.

“Optimizing energy consumption in these forward bases is an issue that could have major impacts going forward,” Joshi said. “The mix of technologies that could be useful will shift and the overall approaches will shift. That’s the kind of exciting research and development framework that we intend to bring to bear on this challenge.” 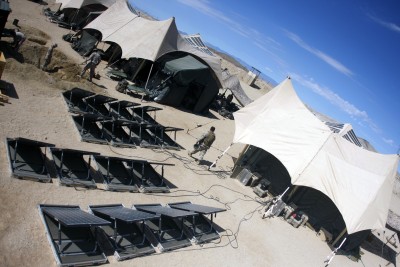 Caption: The U.S. Marine Corps is evaluating the use of alternative energy sources to provide power for its operations. This image shows an evaluation of photovoltaic panels in 2010. 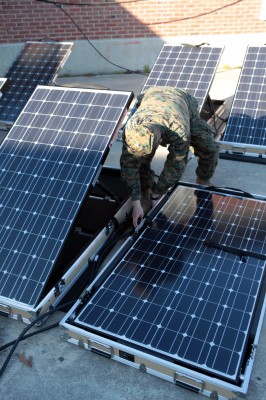 Caption: The U.S. Marine Corps is evaluating the use of alternative energy sources to provide power for its operations. This photograph shows a photovoltaic panel being stored for transportation. 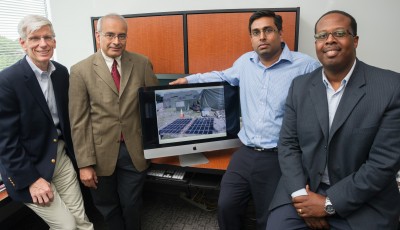