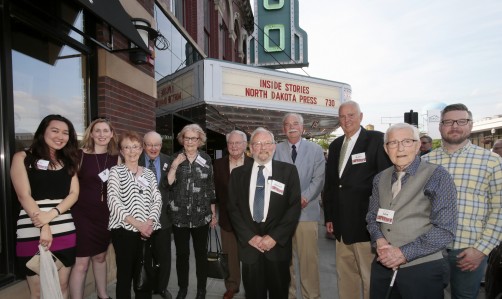 “In the current media environment, it’s really important to tell the story of the press and the real difference they make in people’s lives and in their communities,” said Teri Finneman, the film’s executive producer and an assistant professor of journalism at South Dakota State University. The film, which was supported by the North Dakota Newspaper Association, debuted last summer in Fargo.

Finneman, who began her journalism career in North Dakota, had just finished an oral history project on notable women journalists when she learned through her hometown newspaper that the North Dakota Newspaper Association was establishing a digital hall of fame.  She then proposed the oral history idea.

She has also begun working on a similar project with the South Dakota Newspaper Association. Finneman and her history of journalism students have filmed nine interviews with South Dakota journalists.

“As a media historian, I am very aware that much of media history is focused on the major media outlets, like the New York Times and Washington Post,” she said. “However, small regional media comprise the majority of journalism in this country, so it’s important to also capture that history.”

During a three-year period, Finneman interviewed eight North Dakota columnists, editors and publishers, with Ryan Babb, formerly of the Fargo Forum, doing the filming. Students at the University of Missouri School of Journalism, where Finneman earned her graduate degrees, compiled the histories into a documentary.

Mike Jacobs, retired editor and publisher of the Grand Forks Herald, for instance, talks about how the dike broke during the 1997 flood and he and his staff had to evacuate their building, which subsequently burned. The newspaper staff operated out of an elementary school in Manvel, North Dakota; had the paper printed in St. Paul, Minnesota; and then flown back to Crookston, Minnesota and driven to Grand Forks. He recalled how people literally ran up to him asking for a copy of the newspaper.

“People don’t realize how critically important news is until we are in the midst of a devastating event,” Finneman said.