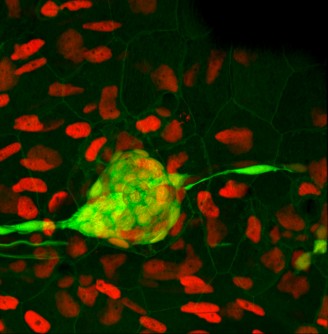 A neuromast sensory structure (green) of the zebrafish lateral line, which helps the fish detect water movement, is shown among surrounding cells (cell nuclei in red).

Newswise — KANSAS CITY, MO—The older we get, the less likely we are to hear well, as our inner ear sensory hair cells succumb to age or injury. Intriguingly, humans are one-upped by fish here. Similar hair cells in a fish sensory system that dots their bodies and forms the lateral line, by which they discern water movement, are readily regenerated if damage or death occurs.

A new study in the July 16 online and August 10 print issue of Developmental Cell, from Stowers Institute for Medical Research Associate Investigator Tatjana Piotrowski, Ph.D., zeros in on an important component of this secret weapon in fish: the support cells that surround centrally-located hair cells in each garlic-shaped sensory organ, or neuromast. “We’ve known for some time that fish hair cells regenerate from support cells,” Piotrowski explains, “but it hasn’t been clear if all support cells are capable of this feat, or if subpopulations exist, each with different fates.”

The researchers determined that approximately half of the dividing support cells differentiated into hair cells, while the rest self-renewed. Self-renewal is an equally important fate, Piotrowski points out, because it ensures maintenance of a reserve force that, if necessary, can spring into regenerative action. The researchers also observed that lineage fate of support cells hinged on where they were located in the neuromast, as self-renewing cells were found clustered at opposite poles while differentiating cells were distributed in a random, circular pattern close to the center.

Such distinct support cell locations were “strongly indicative of differences in gene expression”, Piotrowski says, so the team turned its attention to exploring some of the genes and signaling pathways involved. A study of gene expression patterns showed that members of the Notch and Wnt pathways were expressed in different parts of the neuromast, specifically the Notch members in the center and the Wnt members at the poles. To determine if and how these two pathways regulate each other, the researchers used an inhibitor to turn off Notch signaling in neuromasts. This halt in Notch activity mimics the halt known to occur immediately after neomycin-induced hair cell death. After inhibitor treatment, they saw transient upregulation of Wnt ligands in the neuromast center, along with support cell proliferation. The majority of the proliferating cells became hair cells.

“We found that Notch directly suppresses differentiation (of support cells into hair cells), and indirectly inhibits proliferation by keeping Wnt in check,” Piotrowski explains. “Previously, others thought perhaps it was Wnt that had to be downregulated, to initiate regeneration. However, our data support the loss of Notch signaling as a more likely trigger.” Essentially, the process of restoring injured or dead hair cells in neuromasts is jump-started by the transient suppression of Notch, while its eventual reactivation restores the balance, ensuring that not all support cells answer the call to regenerate through proliferation and differentiation.

Piotrowski’s research is partially supported by the Hearing Health Foundation through its Hearing Restoration Project (HRP), which emphasizes collaborations across multiple institutions to develop new therapies for hearing loss. By continuing to illuminate the intricacies of hair cell regeneration in zebrafish, she and her team are providing other HRP scientists with candidate genes and molecular pathways to probe in other models such as chicken and mice, with the goal of providing insight that could someday make human inner ear hair cells readily replaceable.

Hair cells in sensory structures called neuromasts, which form the sensory system fish use to orient themselves in water, are similar to mammalian inner ear hair cells responsible for our sense of hearing. Unlike the latter, however, they are constantly replaced after damage or death. In the current issue of Developmental Cell, Stowers Associate Investigator Tatjana Piotrowski, Ph.D., and members of her lab closely examine, in zebrafish, the support cells from which hair cells regenerate. By tracking individual support cells during neuromast regeneration, first author Andrés Romero-Carvajal, Ph.D., shows that approximately half become hair cells, while the rest self-renew as support cells. These lineage decisions are coordinated by interactions between the Notch and Wnt signaling pathways and are location-specific, as differentiation into hair cells occurs toward the center of neuromasts and self-renewal occurs at opposite poles of the structures. Piotrowski hopes her lab’s findings in zebrafish may be extrapolated to mammals someday, to help provide basic insight needed to progress towards the ultimate goal of regenerating human inner ear hair cells. About the Stowers Institute for Medical Research