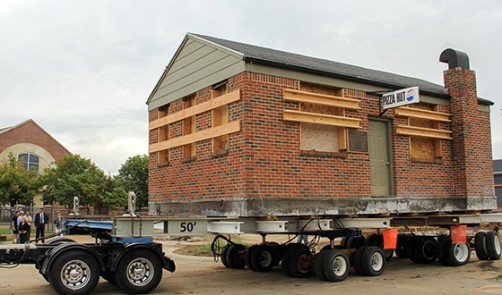 Newswise — The original Pizza Hut building at Wichita State University since 1986 was moved to WSU's new Innovation Campus on Monday, Sept. 18. It will be turned into a museum dedicated to the history of the world-famous pizza chain.

Pizza Hut was founded in 1958 by brothers Frank and Dan Carney, students at what was then the University of Wichita. Go to http://www.wichita.edu/j/?5887 to watch a video.

The building's structure influenced the name of what would become a well-known international chain. The building had a sign that would only accommodate nine characters. The brothers wanted to use "Pizza" in the name and that left room for only three more letters. A family member suggested that the building looked like a hut -- and Pizza Hut was born.

Dan Carney will donate his sizeable collection of Pizza Hut mementos and artifacts to the new museum. Wichita franchisee Fugate Enterprises made a lead gift to the project. Other area franchisees also have donated to the project, with substantial gifts from franchisee Daland Corp. and Pizza Hut Corp.

The Pizza Hut Museum is a $1.2 million fundraising campaign initiated by WSU Foundation to move the 500-square-foot original building from its location on campus north of the Newman Center to just south of the Marcus Welcome Center. Most of the funds, about $700,000, will be used to relocate and renovate the building and a replica of the original roof will be restored.

The Wichita State University Foundation plans to raise $500,000 to endow a student curator program, employing students in academic areas such as history and museum studies to work as docents and update museum contents. Other costs include installation of Pizza Hut memorabilia and video screens to share oral histories of the founding generation.

The museum will serve as a way to highlight Wichita's past and present entrepreneurial history and is expected to open in 2018.

"The Pizza Hut story is the quintessential entrepreneurial success story for Wichita, and it epitomizes how innovation can lead to success," said Keith Pickus, WSU Foundation vice president for corporate and foundation relations. "We believe its story represents the essence of what we hope to achieve with the Innovation Campus."

Pizza Hut -- By the Numbers

- Located in over 100 countries