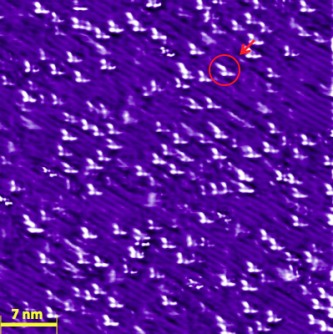 Minghu Pan's image of "clover-like" atomic defects — an example is circled — that result in strong superconductivity.

Newswise — OAK RIDGE, Tenn., Jan. 27, 2014 – Nearly 30 years after the discovery of high-temperature superconductivity, many questions remain, but an Oak Ridge National Laboratory team is providing insight that could lead to better superconductors.

Their work, published in Physical Review Letters, examines the role of chemical dopants, which are essential to creating high-temperature superconductors – materials that conduct electricity without resistance. The role of dopants in superconductors is particularly mysterious as they introduce non-uniformity and disorder into the crystal structure, which increases resistivity in non-superconducting materials.

By gaining a better understanding of how and why chemical dopants alter the behavior of the original (parent) material, scientists believe they can design superconductors that work at higher temperatures. This would make them more practical for real-world wire applications because it would lessen the extreme cooling required for conventional superconducting material. Existing "high-temperature superconductors” operate at temperatures in the range of negative 135 degrees Celsius and below.

“Through this work, we have created a framework that allows us to understand the interplay of superconductivity and inhomogeneity,” said lead author Krzysztof Gofryk, a post-doctoral fellow in the Department of Energy laboratory’s Materials Science and Technology Division. “Thus, for the first time we have a clearer picture of the side effects of dopants.”

ORNL’s Athena Safa-Sefat, who led the team, noted that while scientists have made progress since the first observation of superconductivity in the Dutch province of South Holland in 1911, they still do not know what causes some complex multicomponent materials to be superconductive at high temperatures. Additional progress will most likely hinge on answering fundamental questions regarding the interactions of atoms with the crystal, and this work represents a step forward.

“Our bulk and atomic-scale measurements on an iron-based superconductor have revealed that strong superconductivity comes from highly doped regions in the crystal where dopants are clustered,” Sefat said. “If we can design a crystal where such clusters join in an organized manner, we can potentially produce a much higher performance superconductor.”

While several companies manufacture superconducting materials that have been used in specialty applications and demonstration settings, widespread adoption is restricted by cost and complexity. An ideal superconducting wire would be constructed from inexpensive, earth-abundant non-toxic elements. It will also be low-cost for the manufacture of long lengths that are round and flexible and feature good mechanical – non-brittle – properties with a high superconducting temperature.

Other authors of the paper, titled “Local inhomogeneity and filamentary superconductivity in Pr-doped CaFe2As2,” are Minghu Pan, Claudia Cantoni, Bayrammurad Saparov and Jonathan Mitchell. This research was funded by DOE’s Office of Science.

UT-Battelle manages ORNL for the Department of Energy’s Office of Science. DOE’s Office of Science is the single largest supporter of basic research in the physical sciences in the United States, and is working to address some of the most pressing challenges of the time. For more information, please visit science.energy.gov.