The system may also be used to detect deceptive actions 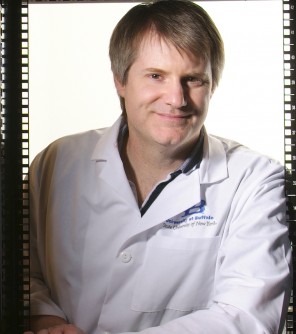 Mark Frank of the University at Buffalo is a co-author of this study.

Newswise — BUFFALO, N.Y. — A joint study by researchers at the University of California, San Diego, the University at Buffalo, and the University of Toronto has found that a computer–vision system can distinguish between real or faked expressions of pain more accurately than can humans.

This ability has obvious uses for uncovering pain malingering — fabricating or exaggerating the symptoms of pain for a variety of motives — but the system also could be used to detect deceptive actions in the realms of security, psychopathology, job screening, medicine and law.

A photo of Frank is available at:http://www.buffalo.edu/news/releases/2014/04/008.htmlThe study employed two experiments with a total of 205 human observers who were asked to assess the veracity of expressions of pain in video clips of individuals, some of whom were being subjected to the cold presser test in which a hand is immersed in ice water to measure pain tolerance, and of others who were faking their painful expressions.“Human subjects could not discriminate real from faked expressions of pain more frequently than would be expected by chance,” Frank says. “Even after training, they were accurate only 55 percent of the time. The computer system, however, was accurate 85 percent of the time.”

They found that machine vision was able to automatically distinguish deceptive facial signals from genuine facial signals by extracting information from spatiotemporal facial-expression signals that humans either cannot or do not extract.

“In highly social species such as humans,” says Lee, “faces have evolved to convey rich information, including expressions of emotion and pain. And, because of the way our brains are built, people can simulate emotions they’re not actually experiencing so successfully that they fool other people. The computer is much better at spotting the subtle differences between involuntary and voluntary facial movements.”

Bartlet says this approach illuminates basic questions pertaining to many social situations in which the behavioral fingerprint of neural control systems may be relevant.

“As with causes of pain, these scenarios also generate strong emotions, along with attempts to minimize, mask and fake such emotions, which may involve ‘dual control’ of the face,” Bartlett says.

“Dual control of the face means that the signal for our spontaneous felt emotion expressions originate in different areas in the brain than our deliberately posed emotion expressions,” Frank explains, “and they proceed through different motor systems that account for subtle appearance, and in the case of this study, dynamic movement factors.” The computer-vision system, Bartlett says, “can be applied to detect states in which the human face may provide important clues as to health, physiology, emotion or thought, such as drivers’ expressions of sleepiness, students’ expressions of attention and comprehension of lectures, or responses to treatment of affective disorders.”

The single most predictive feature of falsified expressions, the study showed, is how and when the mouth opens and closes. Fakers’ mouths open with less variation and too regularly. The researchers say further investigations will explore whether such over-regularity is a general feature of fake expressions.