Rush is first to offer new 'pacemaker for pain' 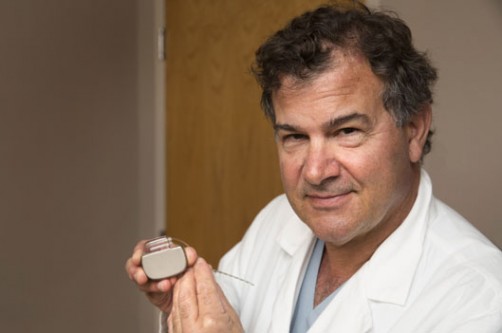 Newswise — When the damaged nerves in Anthony Newberry’s foot healed incorrectly after a workplace accident, it left him feeling “like my foot was exploding for hours at a time,” he says. Unable to work or walk, the 38-year-old Millington, Illinois, construction worker became depressed, dependent upon pain medication and seriously considering suicide.

Within a minute of beginning a new treatment at Rush University Medical Center, Newberry’s searing pain was reduced to a slight tingle.

“My life has come back tenfold,” he says. “I can go back to work, I can play with my kids. It’s given me hope and is the greatest thing anyone can ever ask for.”

Newberry’s injury had left him with complex regional pain syndrome, or CRPS, a debilitating condition that can develop when nerves damaged in a trauma or surgery heal improperly, causing them to send nearly constant pain signals to a person’s shoulder, feet or hands. He was treated with a surgically implanted electronic device, called the Axium Neurostimulator System, that interferes with these pain signals.

His doctor, Timothy Lubenow, MD, medical director of the Rush Pain Center, was the first physician in the country to offer the treatment, which the U.S. Food and Drug Administration approved for the treatment of CPRS in the lower limbs of adults in February. Lubenow, a professor in Rush Medical College’s Department of Anesthesiology, has provided the treatment for 26 patients to date. Asokumar Buvanendran, MD, director of orthopedic anesthesia and a professor of anesthesiology at Rush, has implanted five more of the devices.

For more than 40 years, physicians have been treating chronic pain by implanting small devices, called spinal cord stimulators, that send low-intensity electrical pulses to the spinal cord through a series of wires positioned along the vertebrae. These pulses travel faster than the pain signals the human nervous system sends to the brain, essentially tricking the brain into producing a tingling sensation rather than the sensation of pain.

Unfortunately, spinal cord stimulation has provided only moderate pain relief for about half the patients who receive it. When researchers used the Axium Neurostimulator System to send those electrical pulses directly to bundles of nerves immediately adjacent to the spinal cord — the dorsal root ganglia — in a clinical trial, 93 percent of participants reported that their level of pain was reduced by at least 50 percent. Even better, 70 percent of participants reported 80 percent pain relief.

The dorsal root ganglia are densely populated with sensory nerves and relay pain signals to and from specific areas of the body, thus allowing doctors to more precisely and effectively target and block pain. The system is implanted during a surgical procedure while the patient is under general anesthetic and activated remotely after the patient regains consciousness.

'The most remarkable advance in alleviating chronic pain'

Like Newberry, other patients who have suffered from untreatable CRPS for an extended time have experienced immediate improvement with this treatment. One of Lubenow’s first patients to receive DRG stimulation treatment was a woman in her mid-40s whose chronic lower leg pain had confined her most days to a wheelchair.

“Four hours after the DRG stimulator was turned on, she was able to walk out of Rush,” Lubenow says. “She is overjoyed.”

He shares his patients’ euphoria: “This has been the most remarkable advance in alleviating chronic pain that I have seen in 30 years."