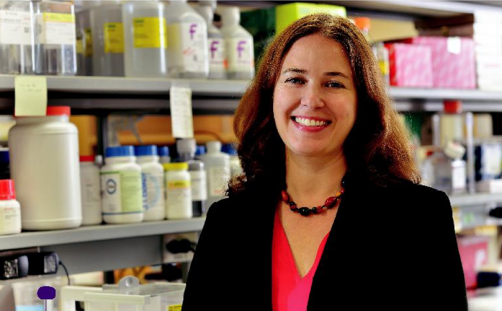 Newswise — For some cancer patients, the road to remission and healing can have its share of speed bumps. That’s particularly true of patients with non-small cell lung cancer (NSCLC) who develop a secondary, or acquired, resistance to immunotherapy, which initially was effective against their tumors. A team at Yale Cancer Center, led by cancer biologist Katerina Politi, PhD, has made a breakthrough in identifying genetic changes that occur during immunotherapy treatment and enable tumors to evade therapy in certain patients.

Immunotherapy has emerged as a promising treatment for NSCLC patients who are not a match for targeted therapies. The regimen acts on immune checkpoints so that T cells can identify and kill cancer cells. “Studies have found that patients can have very durable responses to immunotherapy,” explained Dr. Politi, an Associate Professor in the Departments of Pathology and Medical Oncology. “And, they seem to have fewer and different toxicities than standard chemotherapy.” Yale Cancer Center played a key role in the development of immunotherapy. Extensive clinical trials at Smilow Cancer Hospital paved the way for FDA approval of the groundbreaking immunotherapy drugs Nivolumab and Pembrolizumab for patients with NSCLC.

Some NSCLC patients have primary resistance to immunotherapy; the tumor doesn’t respond at all to therapy. In her latest study, Dr. Politi’s lab focused on acquired resistance. “It’s a major problem,” she said. “It’s fascinating to see how a tumor evolves through therapy. As we began to learn more about how immune checkpoint inhibitors work in lung cancer, we began wondering how resistance would occur with these therapies that target the immune system.”

The “we” that Dr. Politi refers to is the cross-disciplinary team of Yale Cancer Center experts who worked with her on the study: pathologists, cancer biologists, medical oncologists, geneticists, immunobiologists, and bioinformaticians. The team examined

NSCLC patient tissue samples that were collected at two distinct points during treatment: before the patient was treated with the immunotherapy that caused the tumor to shrink, and after the tumor had developed resistance to the therapy and stopped responding. “Those samples and biopsies are critical for us to be able to understand what’s happening throughout the course of therapy,” she explained. “We’re grateful to everyone who contributes to this research effort, because they have a huge impact.”

The team sequenced each tissue sample’s genome and looked for differences in the before-and-after samples. In one patient’s samples, a mutation occurred in a vital protein known as B2M. “What happens when you don’t have B2M is that T cells can’t recognize the tumor cells,” Dr. Politi said. “Even if you activate the T cells with immunotherapy, it won’t work.

"It’s fascinating to see how a tumor evolves through therapy. As we began to learn more about how immune checkpoint inhibitors work in lung cancer, we began wondering how resistance would occur."

The tumor escapes therapy.” Their further research using mice and tumors grown from resistant tissue grafts confirmed a connection between the B2M protein and resistance.

“What we’re doing now is trying to understand if there are other ways in which tumor cells can downregulate this pathway so that the T cells don’t recognize the cancer cells,” she said. “Are there other resistance mechanisms that aren’t genetic that can do this?”

The B2M discovery is currently in press at Cancer Discovery and echoes strides made by Dr. Politi and her 11-member laboratory in their studies of resistance to targeted therapies. Their work on mutations in the Epidermal Growth Factor Receptor (EGFR) gene in patients with lung adenocarcinomas and related work earned Dr. Politi the Early Career Investigator Award from the American Society for Investigative Pathology.

“The discovery of a specific resistance mechanism to targeted therapies in EGFR mutant lung cancer allowed scientists to focus their efforts on figuring out ways to overcome such resistance,” she explained. “We now have new therapies that target tumors with resistance to EGFR targeted therapies. Similarly, with immunotherapy, if we understand resistance, we can direct our efforts to overcome and prevent that resistance.” The team’s discovery of the B2M mutation is a shining example of the collaborative spirit of the Yale SPORE in Lung Cancer, an $11-million effort funded by the National Cancer Institute. Short  for  Specialized  Programs  of Research Excellence, the SPORE brings together experts across the Yale campus to work on projects focused on NSCLC, one of the world’s most prevalent forms of cancer.  In addition to the support from the SPORE, the Beatrice Kleinberg Neuwirth Fund for Pancreatic and Lung Cancer Research and the Diane and David B. Heller Charitable Foundation provided funds for the project.

“The progress that we have made on identification of B2M alterations is a shining example of the work that can be accomplished through the team assembled by a SPORE. The team’s ability to sequence the tissue samples, before and after treatment with immunotherapy, relies on colleagues’ support, beginning with our medical oncology team in Smilow, and through to our bioinformatics team,” said Roy S. Herbst, MD, PhD, principal investigator of the Yale SPORE in Lung Cancer, Ensign Professor of Medicine, Chief of Medical Oncology, and Associate Director for Translational Research at Yale Cancer Center. “Their collective effort propelled this research forward to discovery.”