Pair Female Engineering Students for Projects, and They Flourish 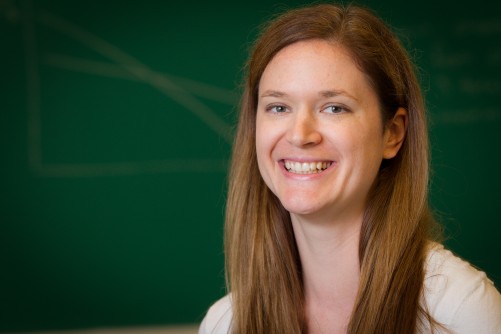 Amanda Griffith, an associate professor of economics at Wake Forest University who specializes in challenges facing women in STEM programs.

Newswise — Female first-year students earn a higher grade when paired with at least one other female for group projects in introductory college engineering classes, according to new research by a Wake Forest University professor.

Those students also are more likely to declare an engineering major at the end of their first year – another step toward the national goal of getting more women to pursue careers in STEM (science, technology, engineering and math).

“When you’re working on a project with people who are more like you, it makes you feel comfortable,” said Amanda Griffith, an associate professor of economics who specializes in challenges facing women in STEM programs. “That connection can be powerful and could point to something about similar learning processes.”

Griffith and her research partner, Joyce Main of Purdue University, presented their findings June 4 at Cornell University. The research is funded by a National Science Foundation grant.

For “There Is No ‘I’ in Team: Peer Effects in Engineering,” Griffith and Main looked at a first-year engineering course at a selective university in the Midwest. Class demographics were typical of a selective engineering program, Griffith said: few female and minority students, with a high number of international students. Across the board, students had high test scores entering the program.

In this “flipped” classroom setting, students prepared for class by watching lectures and completing assigned reading. During class, they worked in randomly selected groups of four to create a design, such as a toy for use in preschool classrooms.

“They have to work as a team in order to do that,” Griffith explained. “It creates a lot of interaction between students that are randomly put together. Because the classroom is flipped, we actually know the interaction is happening.”

“We definitely see benefits for women not being alone in this type of setting,” Griffith said. “What’s going on here could be happening in other engineering settings like this, both in and out of the classroom.”

The next step is to see if the effect carries over or compounds during the second course in the engineering sequence, where students are reassigned to project groups. Griffith and Main also want to see if working with same-gender peers influences whether women graduate with an engineering degree and pursue careers in engineering.

Griffith and Main received the NSF grant, totaling $247,412, in August 2015. They are using a mixed-methods approach to analyze data from a college of engineering in the Midwest to see how peers and role models affect women and under-represented minorities in engineering. The aim is to provide information that can help universities retain more women and minorities in STEM disciplines.

In previous research, Griffith has reported that: