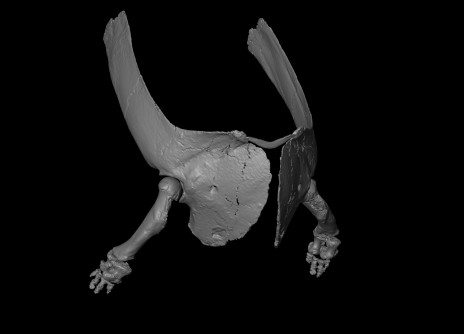 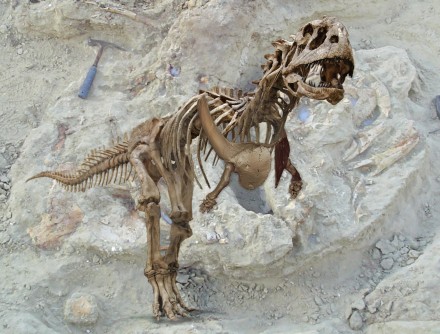 The bizarre forelimb and shoulder girdle of abelisaurid theropod dinosaurs are highlighted in the reconstructed skeleton of Majungasaurus crenatissimus from the Late Cretaceous of Madagascar, shown in front of the articulated specimen in the quarry.

Newswise — DEERFIELD, IL (January, 2012) – 66 million years ago, the fearsome, meat-eating dinosaur Majungasaurus crenatissimus prowled the semi-arid lowlands of Madagascar. Its powerful jaws bristled with bladelike teeth, and its strong legs terminated in formidable claws. Not even its own kin were safe, for given the chance, Majungasaurus was known to engage in cannibalism. Now, a new study published in the Journal of Vertebrate Paleontology shows that there was one part of its dreadful form that was not to be feared: its arms.

First discovered in 1895, Majungasaurus became well known through hundreds of fossils recovered by the joint Mahajanga Basin Project of Stony Brook University and the Université d’Antananarivo between 1993 and 2007. Nearly every structure – from its cranial sinuses to an injury on its tail – has been described in great detail. But the anatomy of Majungasurus’ forelimb has remained a mystery until now.

Lead author Sara Burch, of Stony Brook University, says the arm of Majungasaurus epitomizes the unique forelimb anatomy of abelisaurids, a group of theropod dinosaurs known almost exclusively from southern landmasses collectively known as Gondwana. “The proportions of this limb are unlike anything we see in other theropods. The forearm bones are short, only a quarter of the length of the humerus (upper arm bone), but extremely robust. The wrist bones aren’t even ossified, and the stubby fingers probably lacked claws. The proportions are so strange, it ends up looking like a hand stuck on the end of a humerus.”

Limb reduction is nothing new for theropods; it’s accentuated in the caricature of the mighty Tyrannosaurus rex. Terrifying, to be sure, but with arms too puny to scratch its own face. “Another group of theropods, the alvarezsaurs, go their own odd way with limb reduction,” says co-author Matthew Carrano of the Smithsonian Institution. “These dinosaurs also had very short hands and very short forearms.” And modern-day theropods (those feathered fellows you see flying around) have even lost some digits through evolution. Might one of these scenarios explain the anatomy of Majungasaurus? Not likely, says Burch. “While many theropods have reduced limbs, most retain their normal proportions. We don’t know of any other case where the forearm bones have become more robust in this way. Abelisaurids like Majungasaurus were clearly on a completely different trajectory from the lineage leading to birds.”

With no modern analogs, it’s difficult to speculate on how this stubby forelimb was used. But, says Burch, “grasping is out of the question – there’s no way this animal was doing much manipulation with such a reduced hand. The joint anatomy suggests great mobility at the elbow and wrist, but the individual digits probably could not have moved independently.” The limb may have been used in display, or it may represent an unknown evolutionary path that was cut short by the Cretaceous-Tertiary extinction.

Paleontologist Jonah Choiniere of the American Museum of Natural History, who was not involved with the study, says that the arm of Majungasaurus provides crucial information about theropod evolution. “Until now, most knowledge of the forelimb in abelisaurids has come from two South American species, Carnotaurus sastrei and Aucasaurus garridoi. Thanks to this study, we now know that this morphology was more widespread throughout Gondwana during the Late Cretaceous. What’s more, we now have a solid base for understanding forelimb anatomy in abelisaurids. The next steps are to relate the anatomy to other, more basal theropods and develop robust evolutionary hypotheses for how this bizarre forelimb evolved.”

ABOUT THE SOCIETY OF VERTEBRATE PALEONTOLOGYFounded in 1940 by thirty-four paleontologists, the Society now has more than 2,300 members representing professionals, students, artists, preparators and others interested in vertebrate paleontology. It is organized exclusively for educational and scientific purposes, with the object of advancing the science of vertebrate paleontology.

The article appears in the Journal of Vertebrate Paleontology 32(1) published by Taylor and Francis.

Citation: S. H. Burch and M. T. Carrano. An articulated pectoral girdle and forelimb of the abelisaurid theropod Majungasaurus crenatissimus from the Late Cretaceous of Madagascar. Journal of Vertebrate Paleontology 32(1).

OTHER SCIENTISTS NOT DIRECTLY INVOLVED WITH THE STUDY