31-Jul-2014 10:10 AM EDT, by University of Florida Institute of Food and Agricultural Sciences
favorite_border 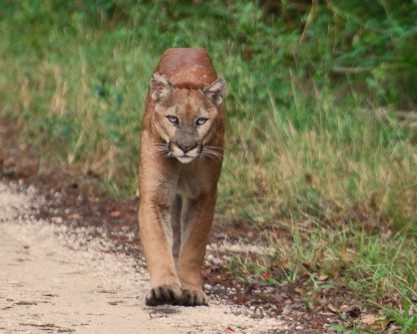 Panthers preying on calves is a problem for Florida ranchers, University of Florida researchers confirmed, but frequency varies with ranches' layout.

Newswise — GAINESVILLE, Fla. — A two-year panther study at two southwest Florida cattle ranches shows that the endangered cats attack and kill calves, but how often that happens can vary greatly by location and landscape.

Caitlin Jacobs, a University of Florida master’s student in wildlife ecology and conservation, conducted the study, in which radio-transmitter tags were put on the ears of 409 calves at two ranches, both near Immokalee.

The Florida panther nearly died out, with an estimated population thinning to just 20 to 25 panthers by 1995, with conservation efforts helping the cat’s numbers grow to an estimated 100 to 160 by 2012.

But the panthers’ comeback has not always been helpful to cattle ranchers.

One of the ranches Jacobs studied lost 10 calves, or 5 percent of the herd each year, to preying panthers, while the other lost only one, or half a percent of that herd, during the same time span. Both ranches also lost calves to other causes, including eight deaths at one ranch and five at the other not attributed to predators.

Overall, panther attacks caused the most deaths, although panthers weren’t the only predator for calves to contend with. Each ranch also lost at least one ear-tagged calf to a bear attack during the two-year study, while some untagged calves were killed by coyotes and vultures.

The ranches’ physical geography, including open spaces and the proximity of wooded areas in which the cats can hide and stalk, likely have much to do with the different rates, she said. But for the panthers to continue their comeback, they rely greatly on the mixed landscape found on ranches, which includes forests, wetlands, prairies and pastures.

Jacobs said she hopes her research helps lead to fruitful policy discussion between state conservation officials and ranchers, perhaps to programs that might pay ranchers to maintain key panther habitat, rather than as compensation for difficult-to-track individual calf losses.

“The ranching landscape is important for panthers. Land that’s used for housing or row crops or citrus groves doesn’t help them the same way; they need those natural areas,” she said.

The research was often gory, with Jacobs, multi-county UF/IFAS livestock Extension agent Lindsey Wiggins and the ranchers themselves evaluating scenes and playing sleuth to determine which predator was to blame: panthers, coyotes, bears or even vultures.

A bite wound to the front or back of the calf’s neck was most often the mark of a panther attack, she said, and the cats almost always dragged their prey to a hiding spot nearby to revisit later. Coyote and bear attacks were much more damaging, with the calf’s body badly bruised or found to have many external wounds.

Jacobs presented her research two weeks ago at the North America Congress for Conservation Biology in Missoula, Mont. Marty Main, associate dean for extension for UF’s Institute of Food and Agricultural Sciences, supervised her research. They expect the study to be published later this year.