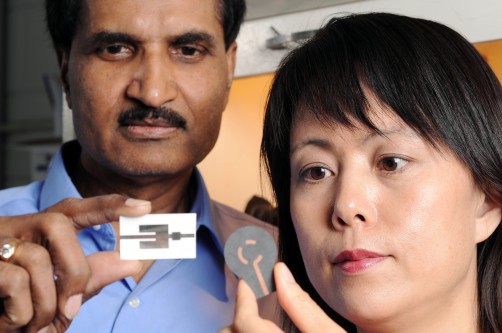 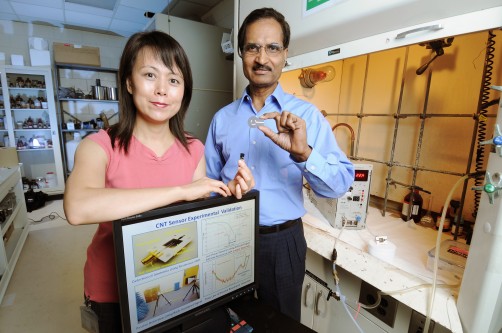 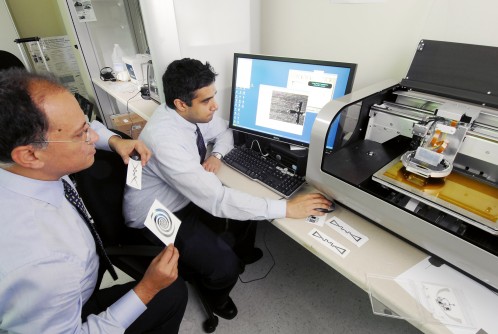 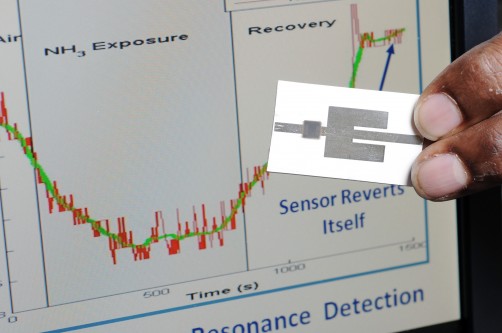 Pictured here is a wireless ammonia sensor that has been inkjet-printed on photographic paper, using antenna loading by carbon nanotubes to achieve high sensitivity to ammonia. 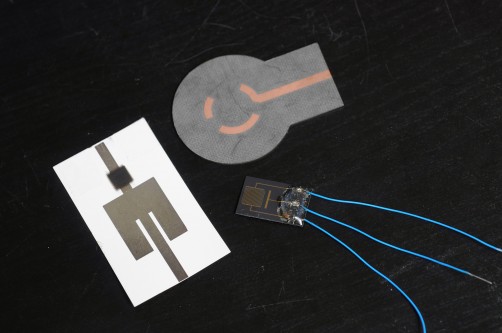 Pictured here are three wireless devices that use carbon nanotubes (CNTs) to achieve high sensitivity to ammonia. At left is a patch antenna, inkjet-printed on photographic paper, with the CNTs shown in black. At top center is an omni-directional segmented loop antenna on a soft substrate, designed for potential 5.8 GHz RFID integration. At bottom right is an inter-digitated capacitor on silicon substrate with CNT loading across the electrodes, being tested for its DC resistance.

Newswise — Researchers at the Georgia Institute of Technology have developed a prototype wireless sensor capable of detecting trace amounts of a key ingredient found in many explosives.

The device, which employs carbon nanotubes and is printed on paper or paper-like material using standard inkjet technology, could be deployed in large numbers to alert authorities to the presence of explosives, such as improvised explosive devices (IEDs).

“This prototype represents a significant step toward producing an integrated wireless system for explosives detection,” said Krishna Naishadham, a principal research scientist who is leading the work at the Georgia Tech Research Institute (GTRI). “It incorporates a sensor and a communications device in a small, low-cost package that could operate almost anywhere.”

Other types of hazardous gas sensors are based on expensive semiconductor fabrication and gas chromatography, Naishadham said, and they consume more power, require human intervention, and typically do not operate at ambient temperatures. Furthermore, those sensors have not been integrated with communication devices such as antennas.

The wireless component for communicating the sensor information -- a resonant lightweight antenna – was printed on photographic paper using inkjet techniques devised by Professor Manos Tentzeris of Georgia Tech’s School of Electrical and Computer Engineering. Tentzeris is collaborating with Naishadham on development of the sensing device.

The sensing component, based on functionalized carbon nanotubes (CNTs), has been fabricated and tested for detection sensitivity by Xiaojuan (Judy) Song, a GTRI research scientist. The device relies on carbon-nanotube materials optimized by Song.

A presentation on this sensing technology was given in July at the IEEE Antennas and Propagation Symposium (IEEE APS) in Spokane, Wash., by Hoseon Lee, a Ph.D. student in ECE co-advised by Tentzeris and Naishadham. The paper received the Honorable Mention Award in the Best Student Paper competition at the symposium.

This is not the first inkjet-printed ammonia sensor that has been integrated with an antenna on paper, said Tentzeris. His group produced a similar integrated sensor last year in collaboration with the research group of C.P. Wong, who is Regents professor and Smithgall Institute Endowed Chair in the School of Materials Science and Engineering at Georgia Tech.

Tentzeris explained that the key to printing components, circuits and antennas lies in novel “inks” that contain silver nanoparticles in an emulsion that can be deposited by the printer at low temperatures – around 100 degrees Celsius. A process called sonication helps to achieve optimal ink viscosity and homogeneity, enabling uniform material deposition and permitting maximum operating effectiveness for paper-based components.

“Ink-jet printing is low-cost and convenient compared to other technologies such as wet etching,” Tentzeris said. “Using the proper inks, a printer can be used almost anywhere to produce custom circuits and components, replacing traditional clean-room approaches.”

Low-cost materials – such as heavy photographic paper or plastics like polyethylene terephthalate -- can be made water resistant to ensure greater reliability, he added. Inkjet component printing can also use flexible organic materials, such as liquid crystal polymer (LCP), which are known for their robustness and weather resistance. The resulting components are similar in size to conventional components but can conform and adhere to almost any surface.

Naishadham explained that the same inkjet techniques used to produce RF components, circuits and antennas can also be used to deposit the functionalized carbon nanotubes used for sensing. These nanoscale cylindrical structures -- about one-billionth of a meter in diameter, or 1/50,000th the width of a human hair -- are functionalized by coating them with a conductive polymer that attracts ammonia, a major ingredient found in many IEDs.

Sonication of the functionalized carbon nanotubes produces a uniform water-based ink that can be printed side-by-side with RF components and antennas to produce a compact wireless sensor node.

"The optimized carbon nanotubes are applied as a sensing film, with specific functionalization designed for a particular gas or analyte,” Song said. “The GTRI sensor detects trace amounts of ammonia usually found near explosive devices, and it can also be designed to detect similar gases in household, healthcare and industrial environments at very low concentration levels."

The sensor has been designed to detect ammonia in trace amounts – as low as five parts per million, Naishadham said.

The resulting integrated sensing package can potentially detect the presence of trace explosive materials at a distance, without endangering human lives. This approach, called standoff detection, involves the use of RF technology to identify explosive materials at a relatively safe distance. The GTRI team has designed the device to send an alert to nearby personnel when it detects ammonia.

The wireless sensor nodes require relatively low power, which could come from a number of technologies including thin-film batteries, solar cells or power-scavenging and energy-harvesting techniques. In collaboration with Tentzeris’s and Wong’s groups, GTRI is investigating ways to make the sensor operate passively, without any power consumption.

“We are focusing on providing standoff detection for those engaged in military or humanitarian missions and other hazardous situations,” Naishadham said. “We believe that it will be possible, and cost-effective, to deploy large numbers of these detectors on vehicles or robots throughout a military engagement zone.” 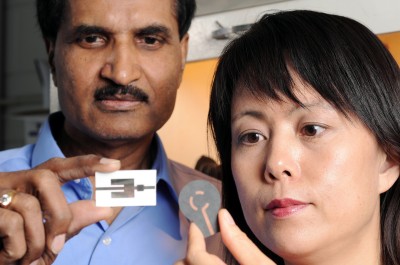 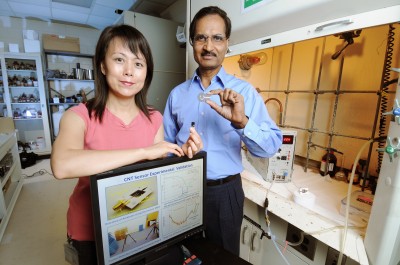 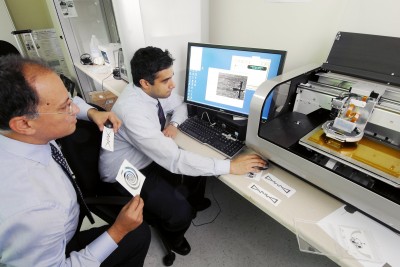 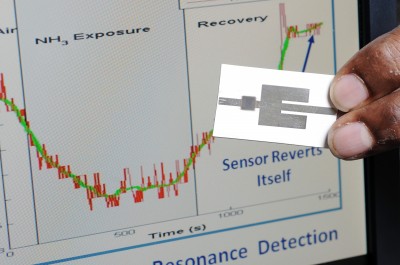 Caption: Pictured here is a wireless ammonia sensor that has been inkjet-printed on photographic paper, using antenna loading by carbon nanotubes to achieve high sensitivity to ammonia. 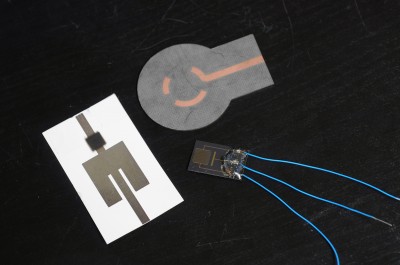 Caption: Pictured here are three wireless devices that use carbon nanotubes (CNTs) to achieve high sensitivity to ammonia. At left is a patch antenna, inkjet-printed on photographic paper, with the CNTs shown in black. At top center is an omni-directional segmented loop antenna on a soft substrate, designed for potential 5.8 GHz RFID integration. At bottom right is an inter-digitated capacitor on silicon substrate with CNT loading across the electrodes, being tested for its DC resistance.