Scientists at the University of Maryland, Baltimore ask others to explore a hypothesis in which behavior of the pathogen Chlamydia trachomatis may increase risks of female infertility. 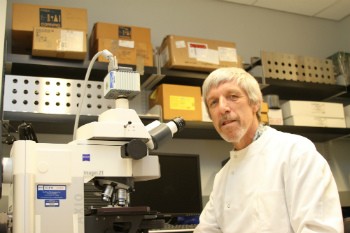 Patrik M. Bavoil, PhD, professor at the University of Maryland School of Dentistry

Scientists are being urged to consider a new paradigm in the basic biology of a pathogen that appears poised to inflict greater harm on public health due to human sexual practices.

In the article, published in The Journal of Infectious Diseases on Nov. 15, 2017, Bavoil and colleagues present a multifactorial hypothesis based on revising the status of C. trachomatis from “principal pathogen to commensal organism/opportunistic pathogen,” which they urge both researchers and clinicians to explore.

Chlamydia is the most frequently reported bacterial genital infectious disease in women in the United States and may be asymptomatic or weakly symptomatic. Left uncured by either antibiotics or the body’s immune system, the infection can result in urethritis, cervicitis, pelvic inflammatory disease (PID), ectopic pregnancy, and infertility, among others. A poorly understood feature of chlamydial infection is that it may persist and go undetected in an infected individual only to reappear later, sometimes years later.

The authors observe that C. trachomatis transmitted via the fecal-oral or genital-oral routes may colonize gastrointestinal (GI) tract sites without symptoms.

“An indirect but compelling argument that supports the idea that C. trachomatis colonizes the GI tract without clinical disease is that most, if not all, other Chlamydia species are first and foremost innocuous gut commensals” in their hosts, the authors state.

Bavoil and colleagues observe that in human hosts, C. trachomatis that colonizes GI sites may disseminate chronically or episodically to the rectum and feces. Furthermore, rectal C. trachomatis may chronically or episodically contaminate and/or infect the female lower genital tract, exacerbating host responses and contributing to reproductive sequelae.

“In developed, sanitized regions of the world, sexual transmission remains the major route by which C. trachomatis disseminates among men and women. GI tract colonization may, however, be making a comeback with the help of increasing oral sex practices,” the authors state.

“A sobering thought is that with oral sex and GI tract colonization, C. trachomatis may have ‘evolved’ yet another, most unsophisticated way to elude the clinician, the infected patient, and the patient’s own immune system,” observe Bavoil and co-authors.

Hence, they suggest that to safeguard public health, clinicians should be encouraged to go beyond the traditional sampling of urogenital sites by expanding screening for C. trachomatis to rectal and, when appropriate, pharyngeal sites in sexually active adults.

Bavoil, lead author, is chair of the Department of Microbial Pathogenesis at the UMSOD and adjunct professor in the Department of Microbiology and Immunology at the University of Maryland School of Medicine (UMSOM). Co-authors are Patricia X. Marques, PhD, a UMSOD postdoctoral fellow; Rebecca Brotman, PhD, MPH, associate professor of epidemiology and public health at UMSOM; and Jacques Ravel, PhD, MSc, professor of microbiology and immunology and associate director for genomics at the Institute for Genome Sciences at UMSOM.

Together they urge other scientists to test what they state as a three-part hypothesis: 1) like its veterinary relatives, the oculogenital pathogen C. trachomatis evolved as a commensal organism of the human GI tract primarily transmissible via the fecal-oral route; 2) in the modern era, C. trachomatis causes opportunistic infection at non-GI tract sites under conditions driven by improved sanitation and hygiene; and 3) the rise in the practice of oral sex contributes to the increased prevalence of the pathogen in the human GI tract. Infectious organisms produced in the GI tract can reach the rectum and go on to infect the female urogenital tract, potentially contributing to, among others, PID and tubal factor infertility.

In parts of the world where fecal-oral transmission remains common, the organism causes chronic ocular disease that is the leading cause of infectious blindness.

Among the steps needed to test the hypothesis, the authors say, scientists should explore whether or not gut C. trachomatis can be detected in regions where fecal-oral transmission is prevalent. Where in the 9-meter-long human GI tract can chlamydial inclusions be found? Does the antibiotic azythromicin cure the organism in the GI tract? Does chlamydial colonization of the GI tract form the basis for chlamydial persistence?

In calling for researchers to undertake these steps, the authors point to implications for the natural history, epidemiology and management of chlamydial infection and disease in humans.