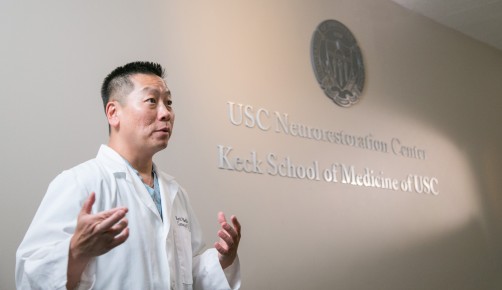 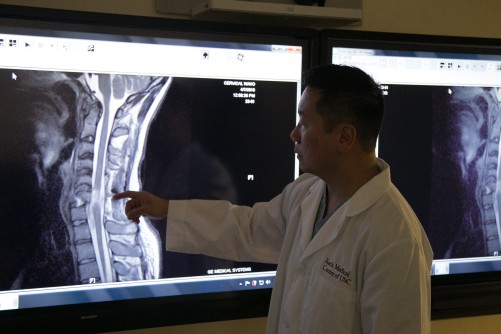 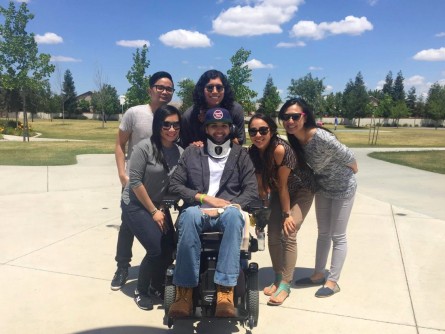 Kris Boesen and members of his treatment team from Keck Medical Center of USC and Rancho Los Amigos National Rehabilitation Center take a break to celebrate his latest advance.

Newswise — Newswise — LOS ANGELES – Keck Medical Center of USC today announced that a team of doctors became the first in California to inject an experimental treatment made from stem cells, AST-OPC1, into the damaged cervical spine of a recently paralyzed 21-year-old man as part of a multi-center clinical trial.

On March 6, just shy of his 21st birthday, Kristopher (Kris) Boesen of Bakersfield suffered a traumatic injury to his cervical spine when his car fishtailed on a wet road, hit a tree and slammed into a telephone pole.

Parents Rodney and Annette Boesen were warned there was a good chance their son would be permanently paralyzed from the neck down. However, they also learned that Kris could possibly qualify for a clinical study that might help.

“Typically, spinal cord injury patients undergo surgery that stabilizes the spine but generally does very little to restore motor or sensory function,” explains Liu. “With this study, we are testing a procedure that may improve neurological function, which could mean the difference between being permanently paralyzed and being able to use one’s arms and hands. Restoring that level of function could significantly improve the daily lives of patients with severe spinal injuries.”

Two weeks after surgery, Kris began to show signs of improvement. Three months later, he’s able to feed himself, use his cell phone, write his name, operate a motorized wheelchair and hug his friends and family. Improved sensation and movement in both arms and hands also makes it easier for Kris to care for himself, and to envision a life lived more independently.

“As of 90 days post-treatment, Kris has gained significant improvement in his motor function, up to two spinal cord levels,” said Dr. Liu. “In Kris’ case, two spinal cord levels means the difference between using your hands to brush your teeth, operate a computer or do other things you wouldn’t otherwise be able to do, so having this level of functional independence cannot be overstated.”

Doctors are careful not to predict Kris’ future progress.

“All I’ve wanted from the beginning was a fighting chance,” said Kris, who has a passion for fixing up and driving sports cars and was studying to become a life insurance broker at the time of the accident. “But if there’s a chance for me to walk again, then heck yeah! I want to do anything possible to do that.”

Qualifying for the Study

Because the window for performing the surgery was tight, everything needed to go according to schedule in order for Kris to qualify.

Once Kris made the decision to pursue enrollment in the study, dozens of doctors, nurses, rehabilitation specialists and others sprang into action. Because he would need to provide voice confirmation of his desire to participate in the study, Kris had to be able to breathe without a ventilator. Weaning a patient from assisted breathing generally is a three-week process. He did it in five days with the help of a respiratory care team. He signed the paperwork and began a week of assessments, scans and other pre-surgery tests.

In early April, a surgical team from Keck Hospital of USC carefully injected 10 million AST-OPC1 cells directly into Kris’ cervical spine. Nearly six weeks later, Kris was discharged and returned to Bakersfield to continue his rehabilitation. Doctors reviewed his progress at seven days, 30 days, 60 days and 90 days post-injection, and Kris can look forward to detailed assessments after 180 days, 270 days and one year.

Rodney and Annette Boesen say they are amazed at the level of collaboration and cooperation that enabled their son to participate in the study. “So many things had to happen, and there were so many things that could have put up a roadblock,” marvels Rodney. “The people at Keck Medical Center of USC and elsewhere moved heaven and earth to get things done. There was never a moment through all of this when we didn’t think our son was getting world class care.”

The pioneering surgery is the latest example of how the emerging fields of neurorestoration and regenerative medicine may have the potential to improve the lives of thousands of patients who have suffered a severe spinal cord injury.

The stem cell procedure Kris received is part of a Phase 1/2a clinical trial that is evaluating the safety and efficacy of escalating doses of AST-OPC1 cells developed by Fremont, California-based Asterias Biotherapeutics. . AST-OPC1 cells are made from embryonic stem cells by carefully converting them into oligodendrocyte progenitor cells (OPCs), which are cells found in the brain and spinal cord that support the healthy functioning of nerve cells. In previous laboratory studies, AST-OPC1 was shown to produce neurotrophic factors, stimulate vascularization and induce remyelination of denuded axons. All are critical factors in the survival, regrowth and conduction of nerve impulses through axons at the injury site, according to Edward D. Wirth III, MD, PhD, chief medical director of Asterias and lead investigator of the study, dubbed “SCiStar.”

“At the 10 million cell level, we’re now in a dose range that is the human equivalent of where we were when we saw efficacy in pre-clinical studies,” says Wirth. “While we continue to evaluate safety first and foremost, we are also now looking at how well treatment might help restore movement in these patients.”

To qualify for the clinical trial, enrollees must be between the age of 18 and 69, and their condition must be stable enough to receive an injection of AST-OPC1 between the fourteenth and thirtieth days following injury.

Keck is one of six sites in the U.S. authorized to enroll subjects and administer the clinical trial dosage.

The first early data results from a group of patients in this study will become available on September 14, 2016.

Photography and video assets can be downloaded at http://www.keckmedicine.org/stem-cell-patient-media-assets/

About the USC Neurorestoration CenterThe USC Neurorestoration Center (NRC) is a multi-institution collaboration for breakthrough discoveries that, for the first time, bring together neural engineering, neuroscience and neurorehabilitation to restore neurological function in the human brain (see http://youtu.be/Lruua3of-j8). The center is the “brain child” of Charles Liu, MD, PhD, director, and Christianne Heck, MD, MMM, co-director, who spent more than 10 years seeking the best community partners to move the treatment of neurological disorders beyond traditional surgery and medications. Drs. Liu and Heck are pioneering the collaboration of a special “dream team” with Keck Medicine of USC, the USC Viterbi School of Engineering, the California Institute of Technology and Rancho Los Amigos National Rehabilitation Center to restore brain function to those with Alzheimer’s, epilepsy, multiple sclerosis, traumatic brain injury (TBI) and other neurological issues. For more information, go to USC Neurorestoration Center.

About Keck Medicine of USCKeck Medicine of USC is the University of Southern California's medical enterprise, one of only two university-based medical systems in the Los Angeles area. Encompassing academic, research and clinical excellence, the medical system attracts internationally renowned experts who teach and conduct research at the Keck School of Medicine of USC and practice through the USC Care Medical Group. The Keck Medical Center of USC includes two acute care hospitals: 401-licensed bed Keck Hospital of USC and 60-licensed bed USC Norris Cancer Hospital, one of the first comprehensive cancer centers established by the National Institutes of Health (NIH) in the United States. The medical system also includes USC Verdugo Hills Hospital, a 158-licensed bed community hospital, and more than 40 outpatient facilities, some at affiliated hospitals, in Los Angeles, Orange, Kern, Tulare, and Ventura counties.

In 2016, U.S. News & World Report ranked Keck Medical Center of USC among the Top 20 in ophthalmology and cancer care, and among the Top 50 hospitals in the United States for urology, geriatric care, orthopaedic care and nephrology.For more information, go to www.keckmedicine.org/beyond