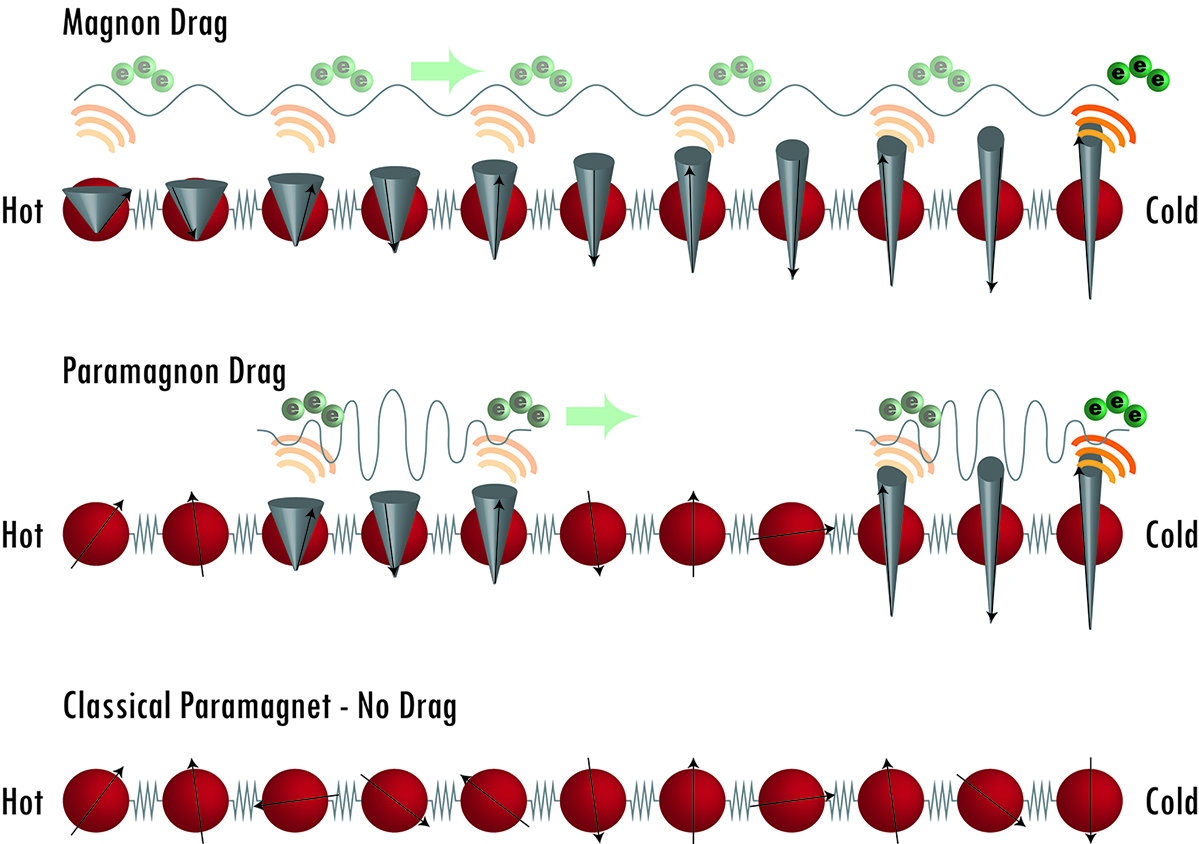 Schematic representation of the magnon and paramagnon drag: Magnon-electron drag is an advective effect between magnons (waves of precession in the spins of individual atoms & represented as little grey cones) and electrons (green dots). The thermal gradient creates a gradient in the angles of the precession cones, which leads to a flow of magnons that then drags electrons along and creates thermopower. In the paramagnetic state, the local thermal fluctuations of magnetization (i.e. paramagnons) form little packets of magnons. These paramagnons can transfer the momentum they acquire in the thermal gradient to electrons and generate thermopower. In contrast, in a classical paramagnet, magnetic moments on the individual atoms are completely uncorrelated; there is no paramagnon or paramagnon drag thermopower in that case.

Newswise — An international team of researchers has observed that local thermal perturbations of spins in a solid can convert heat to energy even in a paramagnetic material – where spins weren’t thought to correlate long enough to do so. This effect, which the researchers call “paramagnon drag thermopower,” converts a temperature difference into an electrical voltage. This discovery could lead to more efficient thermal energy harvesting – for example, converting car exhaust heat into electric power to enhance fuel-efficiency, or powering smart clothing by body heat.

In solids with magnetic ions (e.g., manganese), thermal perturbations of spins either can align with each other (ferromagnets or antiferromagnets), or not align (paramagnets). However, spins are not entirely random in paramagnets: they form short-lived, short-range, locally ordered structures – paramagnons – which exist for only a millionth of a billionth of a second and extend over only two to four atoms. In a new paper describing the work, the researchers show that despite these shortcomings, even paramagnons can move in a temperature difference and propel free electrons along with them, creating paramagnon drag thermopower.

In a proof-of-concept finding, the team observed that paramagnon drag in manganese telluride (MnTe) extends to very high temperatures and generates a thermopower that is much stronger than what electron charges alone can make.

“Above the Néel temperature, one would expect the thermopower being generated by the spin waves to drop off,” says Daryoosh Vashaee, professor of electrical and computer engineering and materials science at NC State and co-corresponding author of the paper describing the work. “However, we didn’t see the expected drop off, and we wanted to find out why.”

At ORNL the team used neutron spectroscopy at the Spallation Neutron Source to determine what was happening within the material. “We observed that even though there were no sustained spin waves, localized clusters of ions would correlate their spins long enough to produce visible magnetic fluctuations,” says Raphael Hermann, a materials scientist at ORNL and co-corresponding author of the paper. The team showed that the lifetime of these spin waves – around 30 femtoseconds – was long enough to enable the dragging of electron charges, which requires only about one femtosecond, or one quadrillionth of a second. “The short-lived spin waves, therefore, could propel the charges and create enough thermopower to prevent the predicted drop off,” Hermann says.

“Before this work, it was believed that magnon drag could exist only in magnetically ordered materials, not in paramagnets,” says Joseph Heremans, professor of mechanical and aerospace engineering at the Ohio State University and co-corresponding author of the paper. “Because the best thermoelectric materials are semiconductors, and because we know of no ferromagnetic semiconductor at room temperature or above, we never thought before that magnon drag could boost the thermoelectric efficiency in practical applications. This new finding changes that completely; we can now investigate paramagnetic semiconductors, of which there are a lot.”

“When we observed the sudden rise of Seebeck coefficient below and near the Néel temperature, and this excess value extended to high temperatures, we suspected something fundamentally related to spins must be involved,” says Huaizhou Zhao, a professor at the Chinese Academy of Science in Beijing and co-corresponding author of the paper. “So we formed a research team with complementary expertise which laid the groundwork for this discovery.”

“Spins enable a new paradigm in thermoelectricity by alleviating the fundamental tradeoffs imposed by Pauli exclusion on electrons,” Vashaee says. “Just as in the discovery of the spin-Seebeck effect, which led to the new area of spincaloritronics, where the spin angular momentum is transferred to the electrons, both the spin waves (i.e., magnons) and the local thermal fluctuations of magnetization in the paramagnetic state (i.e., paramagnons) can transfer their linear momentum to electrons and generate thermopower.”

The research appears in Science Advances and is supported by the National Science Foundation, the Air Force Office of Scientific Research, and the U.S. Department of Energy Office of Science, Basic Energy Sciences, Materials Sciences and Engineering Division. Graduate students and co-first authors Yuanhua Zheng of the Ohio State University, Tianqi Lu of the Chinese Academy of Sciences and Mobarak H. Polash of NC State contributed equally to the work. The Spallation Neutron Source at ORNL is a DOE Office of Science User Facility.

Note to editors:  An abstract follows.

Local thermal magnetization fluctuations in Li-doped MnTe are found to increase its thermopower α strongly at temperatures up to 900 K. Below the Neel temperature (TN∼307 K), MnTe is antiferromagnetic, and magnon drag contributes αmd to the thermopower, which scales as ~T3. Magnon drag persists into the paramagnetic state up to >3×TN because of long-lived, short-range antiferromagnet-like fluctuations (paramagnons) shown by neutron spectroscopy to continue in the paramagnetic state. The paramagnon lifetime is longer than the charge carrier-magnon interaction time; its spin-spin spatial correlation length is larger than the free-carrier effective Bohr radius and de Broglie wavelength. Thus, to itinerant carriers, paramagnons look like magnons and give a paramagnon-drag thermopower. This contribution results in an optimally doped material having a thermoelectric figure of merit ZT>1 at T>∼900 K, the first material with a technologically meaningful thermoelectric energy conversion efficiency from a spin-caloritronic effect.