19-Feb-2016 9:05 AM EST, by Michigan Medicine - University of Michigan more news from this sourcecontact patient services 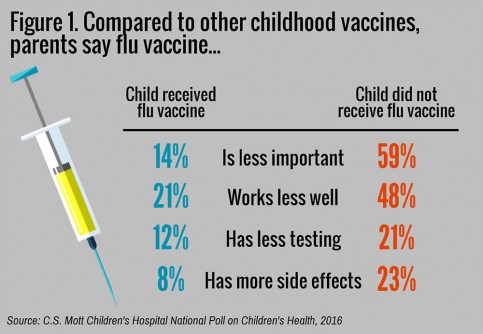 See accompanying graphic with this poll

ANN ARBOR, Mich. — Parents who do not get their children flu shots rate flu vaccine less favorably than other childhood vaccines, a national poll finds.

“Despite substantial public health efforts, flu vaccine rates for U.S. children are well below national targets,” says lead author Sarah J. Clark, M.P.H., associate director of the University of Michigan C.S. Mott Children’s Hospital National Poll on Children’s Health and associate research scientist in the U-M Department of Pediatrics. “In exploring why some parents do not have their child get the flu vaccine, we found that many parents do not believe that flu vaccine is as safe, effective or important as the other vaccines their children receive.”

“The flu vaccine is unlike other recommended childhood vaccines in ways that can be confusing to parents,” says Clark, who is also with Mott's Child Health Evaluation and Research Unit (CHEAR).

“For example, parents generally expect that vaccines will prevent their child from getting a disease. But getting a flu shot for your child does not guarantee he or she won’t get the flu, though generally, vaccinated children will have a less severe case. This is a complicated concept that is different than the way we explain the effectiveness of other childhood vaccines. This may lead parents to wrongly believe that the flu vaccine doesn’t work.”

Roughly 20,000 children under age five are hospitalized each year because of influenza complications, with some illnesses leading to death, according to the Centers for Disease Control and Prevention. The Michigan Department of Health and Human Services this month confirmed the state’s first pediatric flu death of the season.

“Our poll findings are evidence that many parents don’t realize that influenza can be a deadly disease for children,” Clark says. “The belief that flu vaccine is less important than other childhood vaccines was endorsed by 3 in 5 parents of children who have not received flu vaccine this year.”

Parents also perceive a difference in how health care providers talk about flu vaccine. In this poll, parents whose child did not get a flu shot this season were three times more likely than parents of a vaccinated child to say their child’s doctor recommends flu vaccine less strongly than other vaccines (32 percent versus 9 percent).

“Health care providers can play an important role in addressing parents’ negative beliefs about flu vaccine. To do so, they should fully explain and strongly recommend an annual flu vaccine for all children.”

Data Source: This report presents findings from a nationally representative household survey conducted exclusively by GfK Custom Research, LLC (GfK), for C.S. Mott Children’s Hospital via a method used in many published studies. The survey was administered in January 2016 to a randomly selected, stratified group of parents age 18 and older with at least one child age 1-17 (n=1,367). Parents were selected from GfK’s web-enabled KnowledgePanel® that closely resembles the U.S. population. The sample was subsequently weighted to reflect population figures from the Census Bureau. The survey completion rate was 54% among panel members contacted to participate. The margin of error is ± 2 to 6 percentage points.