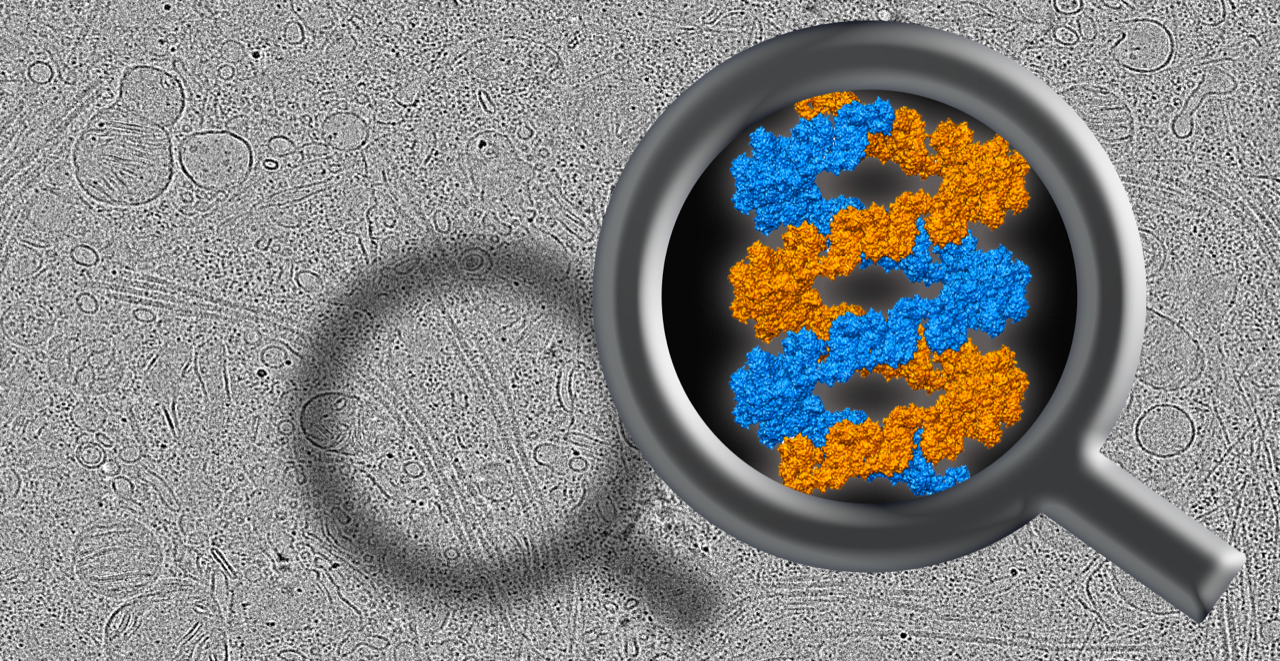 Reika Watanabe and colleagues used cryo-electron microscopy to look up close at the structure of Parkinson’s disease-related protein LRRK2, depicted inside the magnifying glass.

Newswise — SAN DIEGO, CA – The top contributor to familial Parkinson’s disease is mutations in leucine-rich repeat kinase 2 (LRRK2), whose large and difficult structure has finally been solved, paving the way for targeted therapies. University of California, San Diego researchers Reika Watanabe, Robert Buschauer, Jan Böhning, Martina Audagnotto in the laboratory led by Elizabeth Villa used a pioneering technique to reveal the structure of pathogenic LRRK2 in action. Watanabe will present the team’s research on Wednesday, February 19 at the 64th Annual Meeting of the Biophysical Society in San Diego, California.

As many as 1 million Americans are living with Parkinson’s, making it the second most common neurodegenerative disease. The cause of Parkinson’s is not known, but a clue may lie in LRRK2. Familial Parkinson’s, or Parkinson’s with a family history of the disease, account for about 10% of all Parkinson’s cases and are most often associated with mutations in LRRK2, which cause the protein to be hyperactivated. Non-familial Parkinson’s cases have also been associated with hyperactivated LRRK2. However, because it was impossible to solve the LRRK2 structure using traditional methods, we lack an understanding of how LRRK2 contributes to the disease or of what drugs can effectively target the protein. Currently there is no way to cure or slow down disease progress.

Typically when scientists want to determine a protein’s structure, they start by isolating the protein outside of cells. But full-length human LRRK2 proved to be impossible to isolate, in part because of its large size and its tendency to clump together. Instead, Watanabe and colleagues combined light microscopy, to find LRRK2 inside cells, with cryo-electron tomography to get a high-resolution integrative model of the protein in action. This powerful new technique, applied for the first time in this research, makes it possible to gain insights from protein structures in their cellular context.

LRRK2 was known to form filamentous structures around microtubules, which are important for cell’s shape and the transport of materials, and LRRK2 mutations associated with Parkinson’s enhance these filaments. But LRRK2 doesn’t just stick to microtubules, Watanabe and colleagues found pathogenic LRRK2 wrapping around them in exquisitely-organized double-helices. “We didn’t expect it to form such a regular decoration around microtubules,” said Watanabe. LRRK2 also interacted with microtubules with its active domain facing outward, which may indicate that this organization is important for its activation.

Another surprise was that “LRRK2 was bound to smaller diameter microtubules, never before observed in mammalian cells,” said Watanabe. Based on the data, Watanabe doesn’t believe that LRRK2 is causing these small-diameter microtubules, but she does wonder if they’re involved in Parkinson’s pathogenicity.

The team anticipates that the LRRK2 structure will be a launching point for more research understanding the fundamental causes of Parkinson’s, paving the way for scientists to “learn about LRRK2’s functional regulation,” said Watanabe. She is also hopeful that “with this structure in hand, pharmaceutical companies can design a drug that can inhibit LRRK2 activity,” which could provide a widely-applicable cure for Parkinson’s disease.