Partnership Aims to Restore Quail While Cleaning a River

Funded by a $700,000 Maryland grant, the project will install bobwhite buffers and restore wetlands on private farmland. 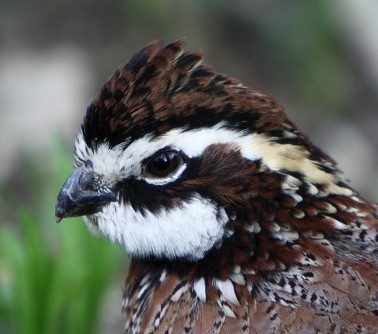 The bobwhite is a popular game bird that, through habitat loss, is nearly extinct on Maryland's Eastern Shore. Photo by Leshoward/Flickr. 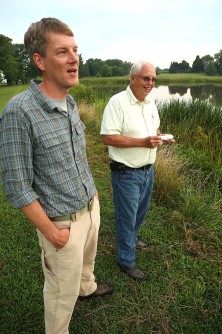 Newswise — CHESTERTOWN, MD—Fueled by a $700,000 state grant, a new partnership between Washington College’s Center for Environment and Society (CES), the Chester River Association (CRA), and Tall Timbers Research Station & Land Conservancy will improve the health of the Chester River and local waterways while restoring native habitat for the threatened Northern Bobwhite Quail, the only native resident quail in Maryland.

The first phase of what is being called the Natural Lands Project is funded by the Maryland Department of Natural Resources through its Chesapeake and Atlantic Coastal Bays Trust Fund after a competitive grant process. Focusing on marginal farmland (less productive acres on the edge of a field or in a former wetland), it will restore wetlands and install buffer zones of warm-season grasses on privately-owned farms on or near the Chester River in Kent and Queen Anne’s counties.

CES Assistant Director Michael Hardesty, who administers the Natural Lands Project, says the buffer zones will be at least 100 feet deep, which is large enough to help protect quail from predators and to filter out up to 85 percent of the phosphorus and nitrogen from agricultural runoff. Wetland restoration might begin as soon as September, while planting the shore buffers will begin in spring 2016. A bonus for birdwatchers and hunters could be a resurgence of bobwhite populations, which have declined dramatically since the 1950s due to habitat loss.

“This is such a win-win,” Hardesty says of the project. “When we first started talking to landowners about it, they got it right away and were eager to partner with us. Local residents feel a real connection to both the bobwhite quail and the Chester River.”

CRA’s Chester Riverkeeper, Isabel Junkin Hardesty, is equally enthusiastic. “The Natural Lands Project balances the interests of water quality, wildlife, and farming in a way that improves the quality of life for everyone in the area. At the Chester River Association, we are ecstatic to see the level of interest in agricultural practices that will help restore both the Chester and a popular game bird.”

The project will follow guidelines known as CP33 (Conservation Practice 33) established in 2004 by the USDA Farm Service Agency as part of the Bush Administration’s “Presidential Bobwhite Habitat Initiative.” The best habitat for quail is a mix of warm-season grasses where they can nest, coupled with areas of shrub and scrub that provide protection from harsh winter weather and predators such as hawks and foxes. That’s why 10 percent of the plantings in the new buffer zones will be shrubs/scrub.

CES will continue to work with the quail experts at Tall Timbers, a Florida-based conservation organization that focuses on “exemplary land stewardship,” to ensure that the new buffers can support quail. Tall Timbers has been consulting with CES and property owner Henry F. “Harry” Sears for the past two years to restore bobwhite quail at his Chino Farms, a 5,000-acre property on the Queen Anne’s County side of the Chester River. (CES manages the Chester River Field Research Station and Foreman’s Branch Bird Observatory on Chino Farms.)

The CES field ecologist in charge of installing the native grass buffers and monitoring their success is Dan Small, recently named Natural Lands Project Coordinator. He has spent years studying the effects of Chino’s restored grasslands on certain bird populations, including radio-tracking quail introduced there by Tall Timbers. “We’re excited to take what we’ve learned at Chino Farms and share it with other farms,” he says. “Of course, everyone wants to help clean up the river and bay, but we’ve found that people especially love to talk about the quail, their memories of what it was like to have a large number of quail on this part of the Eastern Shore.”

One of those people with fond memories is CRA’s Virgil Turner, who grew up on a Kent County dairy farm and spent 47 years as a soil specialist and conservation planner with the state and federal government. He came out of a second retirement to be part of the Natural Lands Project. Although he will bear the main responsibility for the wetlands restoration part of the project, he also will help with establishing grass buffers. “I’m excited about the prospect of hearing quail again,” he says. “In the 1960s, quail was a very popular game bird. They were everywhere.”

Changes in farm practices dealt the birds a heavy blow, Turner explains. “It used to be, nearly every farm had a dairy operation, with pastures and hedgerows and hayfields, all good for quail,” he says. “But starting in the 1960s, the small farmers closed their dairies, removed a lot of the hedgerows and turned the pastures and hayfields into fields of soy, corn and wheat. The conditions were better for waterfowl, and goose hunting became more popular. These farming changes, along with an increase in the number of predators, and probably some other reasons we don’t even know about, have brought quail to near extinction.”

“Just to hear and see quail again will mean a lot to me,” he adds. “And we have a lot of local landowners who are excited about this, too.”

Quail tend to stick close to home, so they need habitat areas that connect if they are to expand their numbers into new locations. The goal of the Natural Lands Project is to create core areas of at least 40 acres of habitat, and then find smaller parcels that can link them together. They expect to begin planting the shore buffers—mostly little bluestem and broomsedge with a mix of flowering plants—in spring 2016.

The physical work of restoring the wetlands might begin as soon as September. As someone who has been on pretty much every farm in Kent County during his career and knows the farmers and landowners personally, Virgil Turner is perfectly suited to coordinate the effort. “I’ve got a soil map of the county, so I am looking for sections of wet soils like Othello and Elkton soils,” he says, referring to official names of soil types, “soils that are tougher to farm and will support wetlands.”

“Thousands of acres of wetlands have been destroyed over the years—drained for farming, road construction, or suburban sprawl,” he continues. “To be able to re-establish more of them is exciting to me. The wetlands are like the kidneys of the landscape. They filter out the impurities and sediment. They also greatly benefit wildlife. A third of the birds that migrate through the county use the wetlands for nesting, food, cover, whatever. They’re great for fur-bearing animals, too, the beaver, muskrat, otter. Plus, in my eyes, a wetland is a thing of beauty.”

Although it can take two to three years for the grasses and restored wetlands to become established, the impact on water quality will be immediate. “Once you take an acre out of production, you are no longer applying chemicals, so there is an immediate benefit of fewer herbicides, pesticides and fertilizers being applied on the land,” says Small. “Then, once they are established, the grasses and wetlands will act as filters between the river and the crops and will hold onto sediment and nitrogen and phosphorous that would otherwise run off into the river.”

It will take longer to know whether the habitat is attracting and retaining quail. “The quail populations are really low right now, and re-establishing them will be difficult,” Small warns.

CES Director John Seidel says “cooperative projects like this, combining the efforts of multiple organizations and landowners, are the most successful way to approach large scale landscape conservation. We’re excited not just by the positive environmental impacts, but by the fact that students will learn from this work at every stage of the project.”

Although the current grant will support restoring grassland borders and wetlands only on the acres already committed, CES and CRA already are hearing from landowners who want to take part in any expansion of the program. “There will be a lot of outreach,” says Small. “In applying for this jumpstart-grant, we talked to a lot of landowners and got letters of intent that will get the project started. When people start hearing quail on their land again, word of mouth will spread the message and spur momentum among others.”