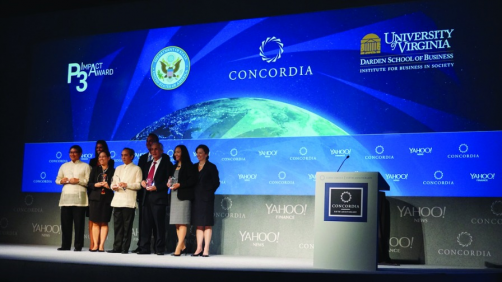 The TV White Space Partnership — a public-private partnership between Microsoft, USAID and the government of the Philippines — won the P3 Impact Award in 2015. Now, Microsoft will use the technology to improve rural broadband internet access in the U.S.

Newswise — Recently, Microsoft announced plans to reach the 23.4 million rural Americans who currently to do not have access to the Internet, committing to provide broadband connectivity to two million under-served Americans over the next five years.

The announcement is part of the company’s strategy to eliminate what it refers to as the “rural broadband gap” in the United States – an issue that Microsoft President & Chief Legal Officer Brad Smith calls “a problem that is receiving a great deal of attention, but not many solutions.”

According to Smith, “[Broadband connectivity] is no longer simply a luxury…It has become a critical connection to a better education and living.”

“New cloud services are making broadband a necessity to start and grow a small business and take advantage of advances in agriculture, telemedicine and education. In short, broadband has become a vital part of 21st century infrastructure,” says Smith.

Despite the widespread need for broadband access and the many benefits it bestows, connecting millions of under-served Americans to the Internet has remained a distant aspiration due to impediments such as technological challenges, market and regulatory conditions, and high costs.

However, Microsoft believes it has found a way to overcome these challenges and finally move the needle on providing broadband access throughout rural America. And – based on the company’s past experimentation and track record – it has good reason to be hopeful.

So just how will Microsoft accomplish its goal?

Over the past several years, Microsoft engaged in public-private partnerships (P3s) around the globe that piloted a technology that taps unused television broadcast frequencies (or “TV White Space”) to extend high-speed, wireless Internet access to remote areas. One of the partnerships piloting the technology in the Philippines received global recognition and the 2015 P3 Impact Award sponsored by the Darden School’s Institute for Business in Society, Concordia and the U.S. Department of State Secretary’s Office of Global Partnerships.

Each year, the three partners present the P3 Impact Award, which recognizes and honors leading public-private partnerships that improve communities and the world. Inaugurated in 2014, the P3 Impact Award seeks the applications of exemplary P3s from around the globe and, after a competitive selection process, announces the winner each fall at the Concordia Summit in New York, New York.

The winner of the 2015 P3 Impact Award, the TV White Space Partnership, was a public-private partnership between Microsoft, USAID and the Philippines’ Department of Science and Technology and Bureau of Fisheries and Aquatic Resources. Under this partnership, USAID tested the use of TV White Space to enable a mobile, online system to formally register fisherfolk in the remote areas of Bohol province. Fisherfolk registration is a key step toward sustainable fisheries management, and it allows fisherfolk to access vital government services, including health care, insurance and poverty alleviation funds.

The experiment, and the TV White Space Partnership, was a success.

Since TV White Space connectivity was established in the Philippines in April 2014, thousands of fisherfolk were registered in the pilot municipalities. Government counterparts began to use this new registration data to design and deploy better fisheries management interventions. Further, more than 3,000 schoolchildren in 20 schools now have Internet access via TV White Space, and when a 7.2 magnitude earthquake struck Bohol in October 2013, the technology was the only available means of communication for post-disaster relief and rehabilitation efforts.

And now, Microsoft is turning its attention to under-served rural America to benefit from this low-cost, but effective, technology. The company estimates that using TV White Spaces costs 80 per cent less than building wired infrastructure.

The planned initiative will follow a public-private partnership model, much like the TV White Space Partnership in the Philippines, engaging the private sector through telecommunications companies, the public sector through the FCC and federal and state infrastructure investments, and the social sector through Microsoft Philanthropies, among other partners.

“The time is right for the nation to set a clear and ambitious but achievable goal – to eliminate the rural broadband gap within the next five years by July 4, 2022,” said Smith. “We believe the nation can bring broadband coverage to rural America in this timeframe, based on a new strategic approach that combines private sector capital investments focused on expanding broadband coverage through new technologies, coupled with targeted and affordable public-sector support.”

Professor Mary Margaret Frank, an academic director of the Institute for Business in Society who leads the center’s P3 Impact Award and multi-sector collaboration efforts, said, “It’s extremely rewarding to see one of our past P3 Impact Award winners using their success and expertise to help under-served communities and improve society.”

“We can’t wait to follow the progress of Microsoft’s newest initiative to provide broadband connectivity to millions of Americans who do not have access to this critical technology. It just goes to show that when purpose-driven companies identify a need, and then partner with the public and social sectors to help address that need, social progress and impact can be achieved. And that’s good for all of us.”

Read more about the TV White Space partnership in a case study by Professor Jeremy Hutchison-Krupat in Darden Business Publishing, Connecting the Dots at Microsoft: Global Planning for a Local World, published January 30, 2017.

Read the original article on Institute for Business in Society at Darden blog.