Uterine fibroid embolization (UFE) is a minimally invasive procedure used to treat fibroid tumors of the uterus which can cause heavy menstrual bleeding, pain, and pressure on the bladder or bowel. It uses a form of real-time x-ray called fluoroscopy to guide the delivery of embolic agents to the uterus and fibroids. These agents block the arteries that provide blood to the fibroids and cause them to shrink. Studies have shown that nearly 90 percent of women who undergo UFE experience significant or complete resolution of their fibroid-related symptoms. 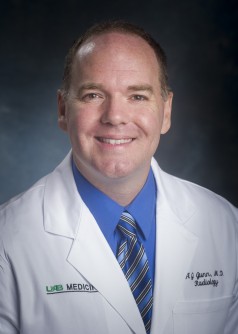 UAB Interventional Radiology A.J. Gunn, M.D., says when appropriate, a fibroid embolization is a superior option to a hysterectomy because it is a less-invasive procedure and has a recovery time of less than a week. 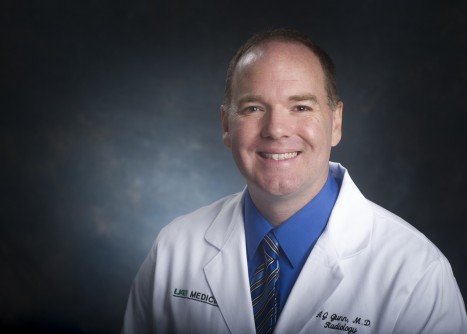 UAB Interventional Radiology A.J. Gunn, M.D., was impressed that patient Venita Gowdy advocated for herself with her doctors to get an opinion on whether or a not a fibroid embolization was a better option for her than a hysterectomy. “Patient education and patient empowerment are so important,” Gunn said. “It’s important for women with fibroids to know that they may not have to go through a big surgery on the scale of a hysterectomy and miss four weeks of work to treat their issue. There is an option that will work for 90 percent of patients in which we can go through a pinhole in your skin to do, have you back at work in three to five days, and can be life-changing.” 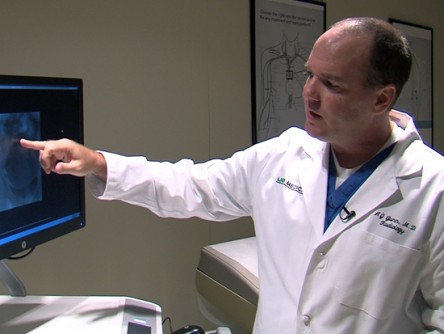 For the fibroid embolization procedure, UAB Interventional Radiology A.J. Gunn, M.D., uses catheters, very small wires and X-ray guidance to find the arteries that are supplying blood to the fibroid and then blocks off the arteries with small gel-like particles.

Previous Next
• See more UAB News at www.uab.edu/news
• The UAB News Studio is available for live or taped interviews with UAB experts.
Newswise — BIRMINGHAM, Ala. – Earlier this year, Venita Gowdy’s struggle with her abnormal menstrual cycle reached a tipping point.

And she was tired of all the pain — physical and emotional.

“Every time I would have my period, I was afraid I would start bleeding and wouldn’t stop,” Gowdy said. “It was emotionally draining, almost to the point of depression. I had to do something.”

An ultrasound ultimately revealed that Gowdy, 41, had a large fibroid in the lining of her uterus. Fibroids, noncancerous growths, most often form in women who are of child-bearing age, and the symptoms include heavy menstrual bleeding, prolonged periods and pelvic pain.

Now armed with her diagnosis, Gowdy was given her options for treatment, which her gynecologist said consisted of an ablation or a hysterectomy, two fairly invasive procedures. But Gowdy read about a procedure called a fibroid embolization, which was minimally invasive, 90 percent successful, and could get her back on her feet and on her normal schedule within a week.

She reached out to the University of Alabama at Birmingham’s Interventional Radiology program to set up an appointment and see if she was a candidate for the fibroid embolization procedure.

“I talked to a couple of my friends who had the same problems I had, and their doctors didn’t do anything for them,” Gowdy said. “I advocated for myself with my gynecologist and, fortunately, found Dr. A.J. Gunn at UAB.”

Gunn, an assistant professor of radiology in UAB’s School of Medicine, looked over Gowdy’s imaging and determined she was a great candidate for the procedure.

“Her fibroid was in a place in her uterus that we know is able to be treated successfully with fibroid embolization,” Gunn said. “When a fibroid embolization is an option, it’s a much better alternative to an ablation or hysterectomy because recovery times are much shorter. It’s a procedure we’ve been performing in interventional radiology and here at UAB for 20 years, but many patients are not aware of the procedure. Fortunately, Mrs. Gowdy did her research and advocated for herself to find the treatment best suited for her.”

The procedure
For the fibroid embolization procedure, Gunn uses catheters, very small wires and X-ray guidance to find the arteries that are supplying the fibroid and then blocks off the arteries with small gel-like particles.

The way this is accomplished is by accessing the blood vessels through either the groin or the wrist. The advantage of going through the wrist — as Gunn did with Gowdy’s procedure — is that the patient can be up and walking almost immediately after the procedure.

Gunn uses the small catheter and even smaller wire to get deep into the uterine artery and find the abnormal vessels feeding the fibroid. Once he reaches the affected area, he uses the X-ray guidance to deliver small particles that block off the blood vessels and starves off the fibroid from the blood supply it needs to stay alive.

The entire procedure can be completed in under an hour and, according to Gowdy, can be life-changing.

“I noticed a difference almost immediately when I had my first period after the procedure,” Gowdy said. “It was amazing how quick the turnaround was for me. I didn’t have to carry a diaper bag or extra pads with me. I was able to do my work and be more productive.

“My life is back to normal for the first time in years.”

Success rate
Gowdy is among the 90 percent of patients whom Gunn says have a successful experience with fibroid embolization.

“Because we are 90-plus percent successful at treating fibroids with this procedure, it means most women don’t need a hysterectomy to treat their fibroids,” Gunn said. “If you can treat your fibroids successfully, safely and with a minimally invasive option and avoid a four- to six-week recovery, why wouldn’t you try this? And if you are one of the small percentage of women we aren’t able to help, you can always go to a hysterectomy afterward. A fibroid embolization is a fantastic first step that is most often successful.”

Fibroids are a common growth in the uterus. According to the National Institutes of Health, almost 75 percent of women will develop uterine fibroids by the age of 50. Women are at increased risk for developing fibroids if they are overweight, African-American, over the age of 40, have high blood pressure, have had no children and have first-degree relatives with fibroids. A lower portion will have symptomatic fibroids, which cause the heavy bleeding during their periods and potentially bleeding between their periods. Gunn says other symptoms, often referred to as “bulk” symptoms, include excessive pain and heaviness in their pelvis, constipation and frequent urination.

“Most of these symptoms are caused because the fibroid is large enough that it is pushing on areas in the body to cause these symptoms,” Gunn said.

Gunn says most of the women treated at UAB for fibroids are between the ages of 40 and 50 and are finished having children. For those who are younger and experience fibroids, Gunn notes that a fibroid embolization does not end the possibility of fertility.

“Patient education and patient empowerment are so important,” Gunn said. “It’s important for women with fibroids to know that they may not have to go through a big surgery on the scale of a hysterectomy and miss four weeks of work to treat their issue. There is an option that will work for 90 percent of patients in which we can go through a pinhole in your skin to do, have you back at work in three to five days, and can be life-changing.”

Call 205-801-4647 to schedule an appointment with a UAB interventional radiologist if you want to see if you’re a candidate for a fibroid embolization. Visit UAB Interventional Radiology online to learn more.