"You don't want to take for granted what you've got"

Cystic fibrosis patient Andrew Gaumer recently marked the 10th anniversary of his successful heart and double-lung transplant at Loyola University Medical Center. Before the transplant, Mr. Gaumer was so short of breath it felt like he was always running on a treadmill. Now he can run a 5-K race or climb a mountain. 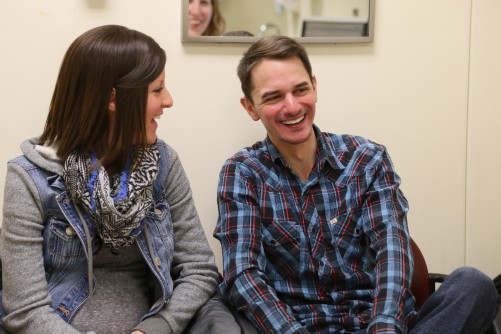 “Every day since then has been a gift,” Andrew said. “I feel really blessed.”

Andrew was born with cystic fibrosis, which causes thick fluid to form in the lungs and other organs. As he reached his 20s, it became increasingly difficult for Andrew to breathe. He spent 14 months at the Ronald McDonald House near Loyola, waiting for a transplant.

Andrew was on oxygen 24 hours a day. He was constantly short of breath – like forever running on a treadmill. Even simple tasks such as putting on socks or brushing his teeth left Andrew gasping for breath.

One of his lungs became infected and shrank, and the other lung grew larger to compensate. The enlarged lung, in turn, stressed his heart and pushed it out of position. So Andrew’s Loyola physicians decided to perform a combined heart and double-lung transplant.

Andrew underwent the heart-lung transplant on March 20, 2005. The transplant was successful, and Andrew’s transplanted organs continue to function normally. He can run a 5-K race or climb a mountain. “You’re limitless in what you can do,” he said.Andrew lives in Ankeny, Iowa, and works full time as a seafood manager at a supermarket. He and his wife, Andrea, married in 2012, and they are expecting their first child in May.

Every three months, Andrew and Andrea Gaumer drive five hours to Loyola for Andrew’s regular check-ups. He could transfer his care to Iowa City, but he prefers to stay at Loyola.

“I’ve never been so genuinely cared for,” he said. “They take it to a whole other level, and I’m not willing to give that up and try something else.”

Erin Lowery, MD, Andrew’s pulmonologist, said Andrew is an inspiration to patients waiting for lung transplants. She tells them that Andrew’s case illustrates how there is “light at the end of the tunnel, and that they can have the sort of life they long for.”

Andrew, 33, sometimes recalls the months when he was desperately ill, and unsure whether he would survive long enough until organs became available.

“There are periods when you remember what it was like,” he said. “Those are good periods, because you don’t want to take for granted what you’ve got. It’s good to remember. Someone had to sacrifice.”