Patterns of Glowing Sharks Get Clearer with Depth

New study with 'shark-eye' camera reveals that biofluorescent catsharks increase light contrast underwater; might be used for communicating with each other 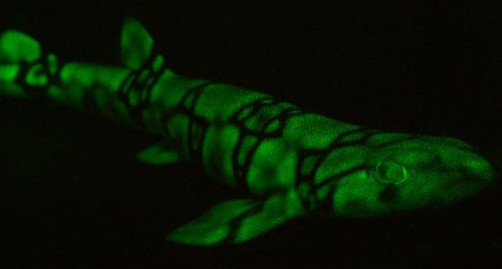 This photo is of a biofluorescent chain catshark (Scyliorhinus rotifer). 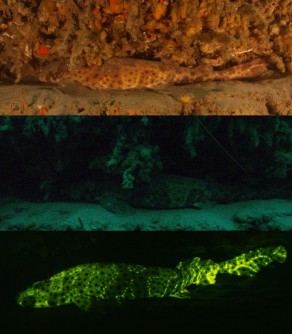 This is a swell shark (Cephaloscyllium ventriosum) in its natural environment in Scripps Canyon under white light (top), natural light (middle), and high-intensity blue light (bottom). 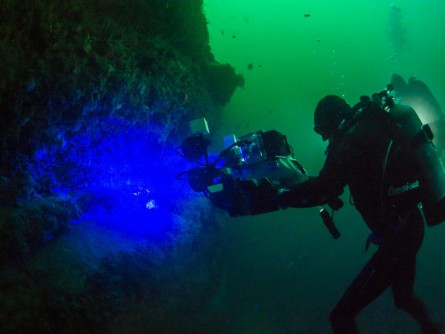 Scientists are collecting biofluorescent images underwater in Scripps Canyon with a custom-built camera and lighting system.

Newswise — A team of researchers led by scientists from the American Museum of Natural History has found that catsharks are not only able to see the bright green biofluorescence they produce, but that they increase contrast of their glowing pattern when deep underwater. The study, conducted with a custom-built "shark-eye" camera that simulates how the shark sees underwater, shows that fluorescence makes catsharks more visible to neighbors of the same species at the depths that they live and may aid in communication between one another. The work was recently published in the journal Scientific Reports.

"We've already shown that catsharks are brightly fluorescent, and this work takes that research a step further, making the case that biofluorescence makes them easier to see by members of the same species," said John Sparks, a curator in the American Museum of Natural History's Department of Ichthyology and a co-author on the paper. "This is one of the first papers on biofluorescence to show a connection between visual capability and fluorescence emission, and a big step toward a functional explanation for fluorescence in fishes."

Sparks and his colleagues recently released the first report of widespread biofluorescence--a phenomenon by which organisms absorb light, transform it, and emit it as a different color--in the tree of life of fishes, identifying more than 180 species that glow in a wide range of colors and patterns. Unlike the full-color environment that humans and other terrestrial animals inhabit, fishes live in a world that is predominantly blue, because with depth, water quickly absorbs the majority of the visible light spectrum. In recent years, the research team has discovered that many fishes absorb the remaining blue light and re-emit it in neon greens, reds, and oranges. By designing lighting that mimics the ocean's light along with cameras that can capture the animals' fluorescent light, the researchers, on their travels around the world, are able to capture this hidden biofluorescent universe. The researchers also recently made the first observation of biofluorescence in marine turtles.

"Our next question was 'What does all this newfound biofluorescence we are finding in the ocean mean?" said paper author David Gruber, an associate professor of biology at Baruch College and a research associate at the American Museum of Natural History. "Can these animals see other animals that are biofluorescing in the deep blue sea? And are they using it in some way?"

To further explore this phenomenon, the researchers focused on the visual ability of two different catsharks: chain catsharks (Scyliorhinus retifer) and swellsharks (Cephaloscyllium ventriosum). With the help of Cornell University veterinary expert Ellis Loew, the researchers used a technique called microspectrophotometry to determine how the sharks' eyes absorb light, discovering that they have long rod pigments that help them see in low-light environments. They used this information to build a special camera filter that simulates how light hits a shark's eyes.

Gruber and Sparks then went on a number of expeditions to Scripps Canyon in San Diego County, where they observed swellsharks in their native habitat, about 100 feet underwater. During night dives, the team stimulated biofluorescence in the sharks with high-intensity blue light arrays housed in watertight cases. The resulting underwater light show is invisible to the human eye. To record this activity, the researchers used custom-built underwater cameras with green filters, which block out the blue light, as well as the newly developed "shark-eye" camera to get a better idea of how the shark sees the underwater display.

"Some sharks' eyes are 100 times better than ours in low-light conditions," Gruber said. "They swim many meters below the surface, in areas that are incredibly difficult for a human to see anything. But that's where they've been living for 400 million years, so their eyes have adapted well to that dim, pure-blue environment. Our work enhances the light to bring it to a human perspective."

By mathematically modeling images from the shark-eye camera, the researchers found that the contrast of the patterns on the biofluorescent sharks increases with depth, suggesting that the animals can not only see the light, but are also likely using it to communicate with one another. The researchers were only able to dive to the top depth range of where this shark lives, where blue and some green light exists. Their model shows that at deeper depths, where the water is bluer, the contrast created by the fluorescence is even greater.

Generous support has been provided by the Dalio Foundation. 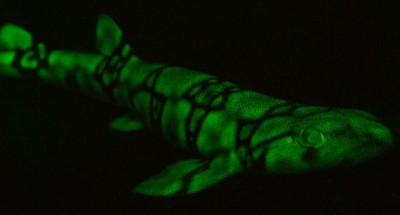 Caption: This photo is of a biofluorescent chain catshark (Scyliorhinus rotifer). 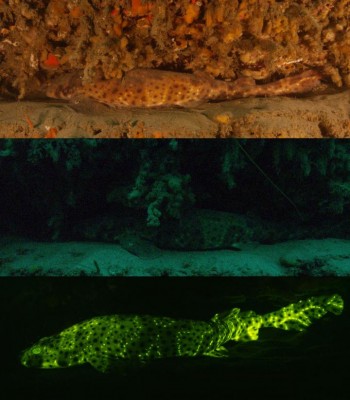 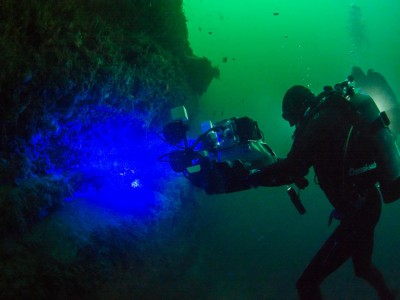